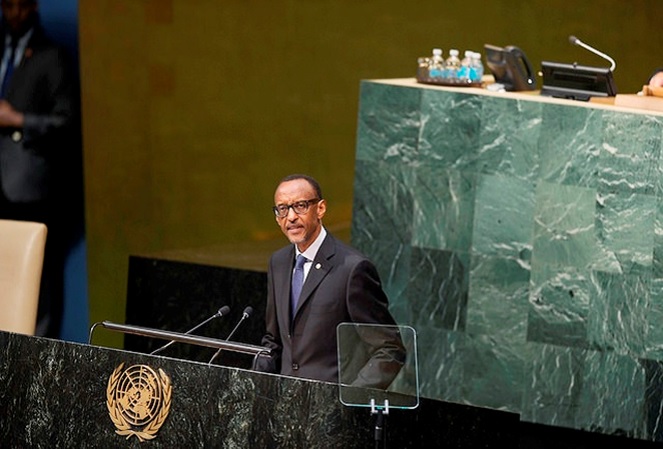 President Paul Kagame told the United Nations General Assembly on Tuesday that a new consensus on sustainable development is lacking although adoption of global goals marks a new era in international cooperation.

“The new consensus on sustainable development is incomplete because it lacks a shared definition of the political legitimacy required to sustain this international order,” President Kagame said.

The Rwandan leader blamed the divergence of visions by member states on colonial history that influenced the foundation of United Nations organisation 70 years ago.

When world powers were establishing the UN, “Independence for colonised peoples of Asia and Africa was not on their agenda. We were seen as people who still needed to be looked after,” Kagame told the fully packed General Assembly.

According to President Kagame the new compact of global goals is about prosperity and it recognises that the only sustainable future is, “one that includes all of us. It could hardly be otherwise. Ending extreme poverty was never going to be enough to fulfil our ambitions.”

He noted that creativity and dynamism of billions of people is already transforming our world for the better thanks to improved health and education, access to new technologies and it is empowering women to take their rightful place.

“Responding to these challenges will put the United Nations at the centre of global affairs as never before in the generation head,” he added.

These moral hierarchies and prejudices have been cited as contributors to mismanagement of political change and; “corroding the trust upon which effective multilateral cooperation depends.”

For the Rwandan leader, internal character of nations and national systems count for everything. They cannot be bypassed. “Political legitimacy is not a legal abstraction; it’s an objective reality which can be measured for example in terms of progress towards the global goals as well as indicators of public opinion.”

Kagame noted that the world is faced with serious challenges that must be confronted together; “as an international community we cannot afford to undermine the most responsible and capable members by applying standards to some countries and not applied to others or even imposing inappropriate ones.”

He said that for example, international refugee law has barely been a factor in the current crisis as if the purpose all along was just to keep the refugees encamped far away from developed countries than to protect the rights of people fleeing persecution.

“Multilateral institutions are used to gain credibility for biased attacks against countries even as scrutiny of the powerful is considered unnecessary,” Kagame said adding that when matters of principle become associated with domination and disdain then the basis for joint action in multilateral system is compromised.

President Kagame warned, “We have nothing to fear from high standards and the only stability worth having is one based on good politics that delivers real results for citizens and facilitates peaceful change.”

He observed that there is human dignity involved and even survival. “No country or system has a monopoly of wisdom much less a claim to moral superiority.”

“Our task is to settle the future not the past. Change is coming and it’s necessary. No one can manage it alone and the global goals rightly recognise our mutual interdependence.”

He concluded his speech saying, “We have made good commitments now we must make good on these commitments. Building a community of shared purpose capable of doing so starts with recognition of our equality.”