Despite being a food secure country, with abundant volumes of food, Rwanda is in immediate need of cereals and grains to compliment other foods grown locally.

Data obtained by KT Press indicate that out of the country’s total food production per year, only 6% are cereals.

The National Risk Atlas produced by the ministry of disaster management and refugee affairs, the country’s staple food is mainly from roots and tubers such as potatoes.

The Atlas shows that of the food crops produced in the country, roots and tubers account for 54%, Banana’s 27%, cereals 6% and fruits 6%, vegetables 4% and Pulses 3%.

Indeed, during the 6th African Grain Trade Summit (AGTS) held (October 1-3) in Rwanda’s capital Kigali; the country indicated that it imports almost all grains and cereals such as rice, wheat, and maize (including seeds).

The country is a net importer of grains and grain seeds from both the East African member states and from the rest of the world.

“We are not yet capable of maximising potential of production capacity per hectare,” Tonny Nsanganira, the state minister for Agriculture told KT Press.

The country also produces approximately 100,000 metric tons of rice per year. Production per hectare is estimated at five tons against a possible nine tons per hectare, thus a production gap of 37 %. 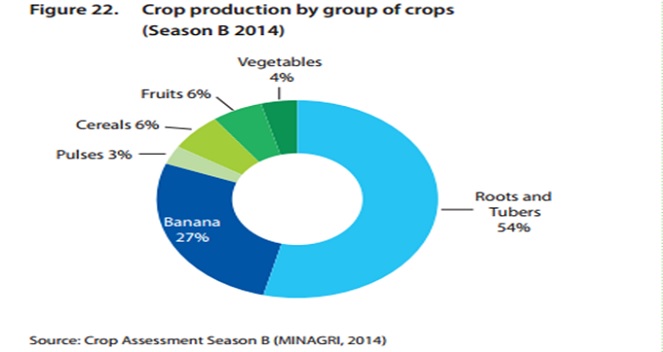 According to Minister Nsanganira, to bridge the production gaps, the country has intensified efforts especially providing fertilizers to farmers and other farm inputs.

For example farmers now receive fertilizers at a 15% to 30% subsidy.

This goes with other components of agriculture modernization across the country. Last week, American billionaire, Haward Buffet was in Rwanda to follow up on his undergoing irrigation project in Kirehe, Eastern province estimated at $24 million.

The project will support irrigation efforts in the 1200 hectares of Nasho marshland dedicated to maize and beans farming.

Meanwhile, despite being in need of grains and cereals, the country has a higher food production level against average population growth, estimated at 5.7% and 2.5% respectively.