Rwanda is the most well governed country in the East African region, according to ‘Ibrahim Index of African Governance (IIAG) Index.

Compared to other countries on the African continent, Rwanda ranks 11th ,Lesotho, Senegal and Tunisia are 10th, 9th and 8th respectively. Mauritius ranks the first reformer on the continent since 2011.

The top ten countries that improved in overall governance in last four years represent almost a quarter of the continent’s population.

Five of these countries include; Senegal (9th), Rwanda (11th), Kenya (14th), Morocco (16th) and Tunisia (8th), bringing in a question of whether these countries might become the continent’s next powerhouses.

The 2015 IIAG consists of 93 indicators which fall into four categories of safety and rule of law, participation and human rights, sustainable economic opportunity and human development.

According to the index, only six countries including Rwanda, Côte d’Ivoire, and Morocco; Senegal, Zimbabwe and Somalia registered improved across each of the four categories.

Mo Ibrahim said that while Africans overall are certainly healthier and live in more democratic societies than 15 years ago, the 2015 IIAG shows that recent progress in other key areas on the continent has either stalled or reversed, and that some key countries seem to be faltering.

“This is a warning sign for all of us. Only shared and sustained improvements across all areas of governance will deliver the future that Africans deserve and demand,” added the Sudanese philanthropist and businessman.

Rwanda, having come from a devastating genocide against Tutsi in 1994, has rapidly improved its economy with annual growth rate of 8% for the past decade.

Transparency International says 80% of Rwandans are happy with the judiciary system, while Global Competitiveness Report ranks Rwanda 34 out of 144 countries, 3rd in Africa and 1st in EAC on independence of its operations. 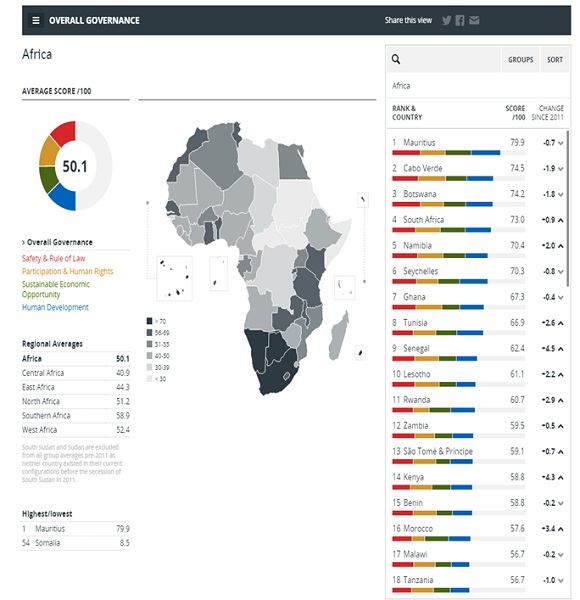