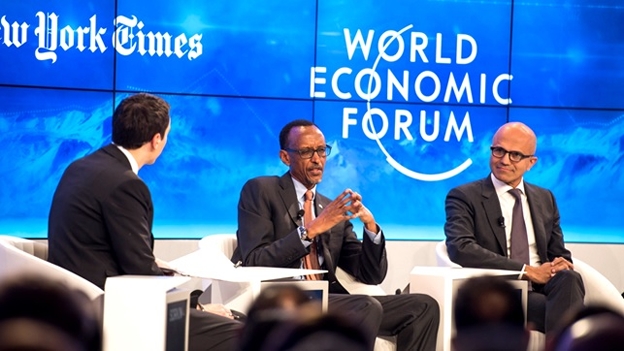 Pressure is mounting in Kigali. Jobs are at stake, so are businesses. Be it a street cleaner or a CEO of a contracted multi-million dollar firm, everyone is anxious.

Roads in the city center are being repaired. Old trees have been cut and replaced with young fresh gardens. Streets in the middle of the city now have more lanes; for cars, pedestrians and riders. New well streamed gardens have been planted alongside.

High-end apartment structures that have been under construction for a long period are now doing their final touches. Hotels are revamping their properties too.

The City Mayor, Fidel Ndayisaba, inspects every corner of the city time to time. Meetings after meetings. It is that serious.

Apparently President Paul Kagame has been asking when will the Marriott Hotel and other structures be ready.

Meanwhile, Kigali city’s face has changed. It starkly looks different from how it looked 90 days ago. Those not in the know can easily suspect something is going on, vividly. What is happening now has been the custom in Rwanda in last two decades: litter-free streets, traffic lights along all highways, construction ongoing everywhere – and the list goes on.

The reason is one. The World Economic Forum on Africa will be hosted by Rwanda in Kigali in May, 2016.

KT Press met with an official from Davos who was in Kigali in December 2015 to inspect and guide the Rwandan team preparing for the much awaited international event.

Rwanda is determined to impress the world, he concluded. “I am here to provide some assistance and guidance, but I can see Rwanda is serious about it, very serious.”

There is still valuable time before the event takes place, but the team began preparations ahead of time to avoid any surprises.  The Office of the Government Spokesperson said it is already contacting people and putting together communications plans. 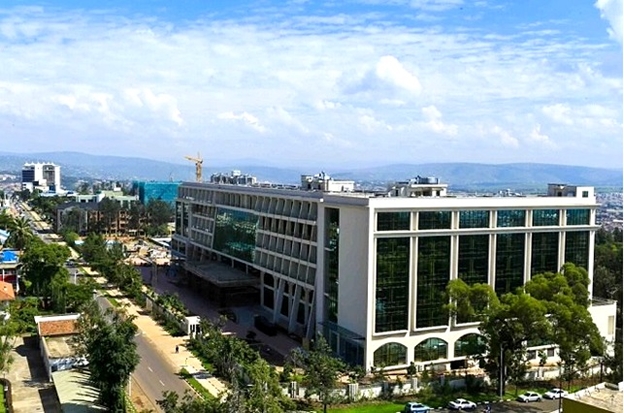 Marriot Hotel in Kigali will be opened in mid February

Kagame takes the team to Davos

President Kagame’s significant entourage to Davos this week comprised of senior government officials. He had five ministers who spoke seperately on different panels.

Some ministers like that of Foreign Affairs Louise Mushikiwabo, and Finance’s Claver Gatete were on panel discussions. There was even a country segment dedicated to Rwanda’s economy where Atlas Mara Group co-founder Bob Diamond and Ashish J. Thakkar shared insights into why they decided to buy two local banks.

Rwanda’s image is at stake for sure. Everything has to go according to plan. The country must vindicate the World Economic Forum, understandably.

Over the past years, the World Economic Forum has ranked Rwanda among the top performers in areas of governance, gender and economic prosperity among others.

Last year Rwanda was ranked 1st globally in female representation in parliament, labour force participation, wage equality, and primary school enrollment. At 15th for more women in ministerial positions, all this has put Rwanda on the 7th position, in the Global Gender Gap Index 2015.

The Global Gender Gap Index thus rewarded Rwanda for its smaller gaps in equal access to its meager resources, regardless of the overall level of resources.

For the business executives such rankings may mean nothing, but mention the level of business sophistication, a modern financial market, friendly regulations and a red carpet, and then they will pay attention.

President Paul Kagame spoke candidly during the WEF in Davos, that one of Rwanda’s weak spots is infrastructure, especially insufficient electricity, and that it is hampering progress and business.

“The best we have done is not good enough,” he said. “We are still lacking electricity to light our streets, our homes.”

But that has not deterred global leaders from admiring and speaking highly of Rwanda’s progress.

The story that sells Rwanda is immaterial. It has nothing to do with the volume of the economy or the natural resources underneath Rwanda’s earth. Far from that. Rwanda is about $9.2 billion GDP, too small that Facebook CEO, Mark Zuckerberg, is five times richer.

What sells Rwanda, instead, is something almost every globally respected research institution has found intriguing and fascinating. The World Economic Forum ranked Rwanda among the best governed countries in the world; the 7th. 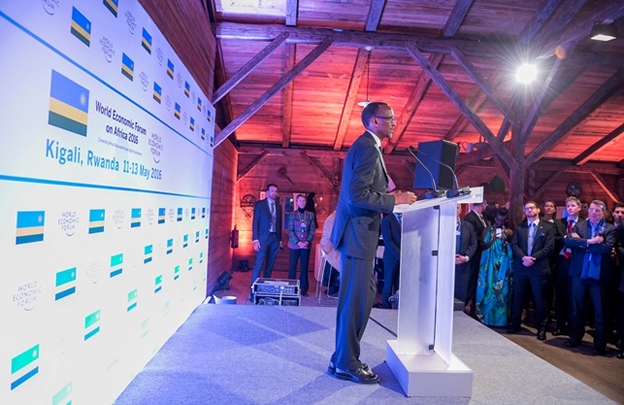 What makes Rwanda score such a high mark, the WEF says, is how the government utilities the meager resources it has to achieve maximum results.

However small the economy is, the World Economic Forum, the World Bank, IMF, and others, have ranked Rwanda among the fastest growing economies in the world.

What global CEOs like about Rwanda though, in particular, is the red carpet environment and intolerance to corruption. Global anti-graft group Transparency International annual index has had Rwanda at the top of its rankings for years.

It does not mean Rwanda is heaven, but the country is no fan to rhetoric. Officials caught up by the law are heavily punished. Even close friends to the President who find themselves on the wrong side of the law are punished, indiscriminately.

Firms that have invested in Rwanda or CEOs who have visited Rwanda have experienced this phenomenon. Some are struck by simple, but serious cases. A traffic police offer will simply arrest anyone proposing a bribe once they are caught in an offense.

Notably though, all this is taking place in a country that is as safe as one’s bedroom. Visitors to Rwanda are stunned by the level of calmness and safety on the clean streets. Apart from it being provocative, a stranger can easily walk on the street with a sack full of a million dollars unharmed. This is unheard of, by all standards.

The conventional mindset is that, such a country is too nice to exist, and if there is one, then it could be harder to be allowed entry than it is to get a USA or a Swiss VISA.

Yet Rwanda, exclusively, has exempted all Africans from VISA applications and has allowed citizens of neighbouring countries to enter without a passport.

Indeed, VISA applications were waived for all participating countries in the ongoing African Soccer Championship tournament in Rwanda.

President Kagame explained to participants in Davos how opening up doors between African nations will unlock most of Africa’s social economic challenges. “We know if we trade amongst ourselves, we would have a higher GDP growth,” he said. His view is that, these are things Africans should not “have to wait for.” 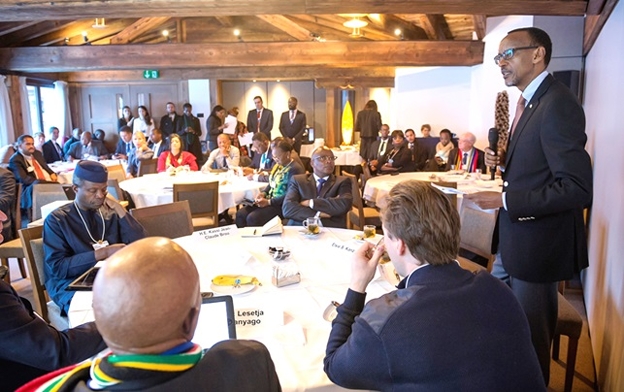 For many, Kagame’s passionate vision for Rwanda, which he recently projected to the year 2050, his desire for Africa’s renaissance in general, does not only give hope, but entices even those who habour pessimism and paint a doomed picture of Africa.

Kagame’s views have to some great extent, shaped the global approach on Africa and how the west should engage the continent in a long-term relationship.

With its military foot print with over 5000 troops in the most feared conflict zones and troubled countries, Rwanda has set an echoing tone, and very well heard.

Speaking about Africa and not mention Rwanda is almost impossible. From Tech firms to  green energy corporations all speak highly of a country that is talking their language.

How the country that was almost wiped off the world map by a despicable genocide against the Tutsi just two decades ago, has managed to rebuild itself and raise to the level of gaining such global influence, is what the rest of the world wants to explore more about.

Diplomatically, the choice of allies is worth studying. Rwanda has not only managed to befriend American and British CEOs, but their governments too. In the Middle East, Israel’s friendship with Rwanda is unquestionable, but the doors in the Arab world have been opened. So is the same with China, Russia, S. Korea, Japan and India.

The UN trusts Rwanda in many fronts. The World Bank does too. In case of a crisis, it doesn’t matter where or the form of the conflict, Rwanda is always willing to send peacekeepers.

If the World Bank proposes a new shift in fighting poverty, Rwanda is always ready to try the policy. And it has always worked out positively.  At Davos, Rwanda sets a perfect example of a possibility during discussions on fighting poverty, climate change or improving health conditions.

The country does not take all this for granted. The World Economic Forum gave Rwanda the privilege to host o the WEF on Africa in May 11-13, 2016.

During the WEF,  Kagame hosted a gala called, “Rwanda Night” and took the advantage to invite participants to the event. Maybe, and maybe, some countries might pick one or two ideas from Rwanda’s rebirth during their stay in Rwanda.

Rwanda, however, is hungrier for ideas and seeking partnership than any other. At least that is how President Kagame looks at it. “Growth is not only due to hard work…but also due to partnerships.”

This partnership thing, is what is keeping everyone awake and anxious ahead of the event.

A view of Kigali city at night/ F.Nkurunziza

Rwandair To Spread Wings To India