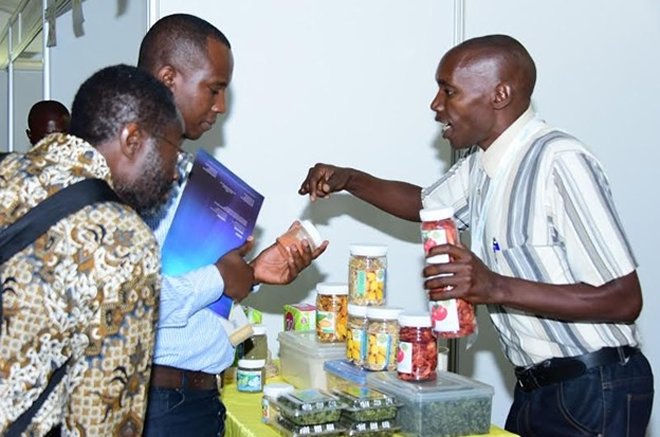 Exhibitor explains about his products

Agriculture experts suggest that Africa needs to urgently invest in value chain to stimulate its rural farmers to engage in agribusiness.

Researchers in Agribusiness gathered at the ongoing Africa Agriculture Science Week at Camp Kigali said farmers need to be financed and trained on enticing agriculture investment.

“Access to finance remain limited. But we can come up with innovative financing models, de-risking agribusiness, business modeling that cuts across the value,” said Mary Thiong’o from Africa Agribusiness incubators network.

Africa’s population is drastically increasing; with youths (364 million of the population between 15-35 years) are at centre stage, and urgent investment in value chain is needed to help farmers engage into agribusiness.

Rwanda is improving its agriculture system by establishing crop intensification program, while investing in innovations and technology among its farmers.

Josephat Mugabo a scientist from Rwanda Agriculture board told KT Press that Rwanda’s Private Sector Federation and World Bank are doing a great job in linking farmers to the market, but “more linking models are needed-given the size of the farmer’s produce is based on.”

Meanwhile, One Acre Fund- a non-profit organization has provided Rwandan farmers with a package of goods and services on credit, including financing for farm inputs, distribution of seed and fertilizer.

Rwandan smallholder farmers especially in Western province last year were funded with at least $80 each as a loan to finance the production season.

This resulted into an average gain of 53% of their total income, mainly in 12 access to modern maize hybrids and fertilisers, appropriate for local soil needs, among others.

At the ‘Investing in Agribusiness’ session, agriculture experts advised that Africa should produce more staple crops for exports, and more emphasis should be put in beans production.

Rwanda is a key consumer of beans globally. According to U.S Global Hunger and Food Security Initiative’s research, Rwanda has highest per capita consumption of beans in the world.

With agriculture being the backbone of the economy, and beans leading staple grain legume accounted for 25% of crop land use, the country seeks investments to boost 700,000 tons of beans produced annually on 350,000 hectares.

Rwanda has invested heavily in climbing beans-proved to be producing three times more food on the same area of land than bush beans.

In the last decade, the country has been transformed from a net importer to an exporter – with exports valued at $12- 20 million and increased yields from 0.7 to 1.1 tons per hectare, according to Rwanda Agriculture Board.

Rwanda’s Agriculture sector contributes about 35% of the country’s GDP, and its projected growth is expected to be 8.5% per year by 2018.