Refugees living in Rwanda will no longer have to worry about their money being swindled by camp officials – a new advanced cash transfer mechanism to refugees using debit cards has been introduced.

Reports in September indicated that several Congolese refugees in Kigeme camp couldn’t access their monthly facilitation after two camp officials stole Rwf2million in the mobile money transfer program that has been previously used to send the money.

One of the two suspects has since been arrested and is under prosecution while another one is still at large according to the Ministry of Disaster Preparedness and Refugee Affairs.

To have a grip on this malpractice- which has tainted the reputation of the United Nations Refugee Agency (UNHCR) in Rwanda, the United Nations World Food Program (WFP), in close collaboration with UNHCR is this Wednesday launching the debit card transfer procedure.

In the new procedure, WFP will transfer money to the accounts of refugee families that will also be given ATM cards to withdraw their stipend and buy family food and other basic needs.

A communiqué from WFP reads that refugees in Rwanda have their accounts opened from the Kenya’s Equity Bank in Rwanda. There are no withdrawals and account maintenance fee for the refugee clients.

This cashless money solution and development is being introduced in three refugee camps of Nyabiheke, Kigeme and Gihembe out of the six official refugee camps in Rwanda. The three camps host 49,000 refugees out of the 164,300 Congolese and Burundian refugees in Rwanda.

Each individual refugee gets about Rwf6300 per month for food facilitation and they can buy food of their choice unlike in the past when they depended on WFP food supplies. At times, say WFP officials, this raised conflicts among refugees on diet and portions allocated to each family or individual.

The smart card adopted by WFP can serve other agencies that assist refugees in several components like health, education and others, thus the name, Multiple Wallet Debit Card .

“This card will initially be used by WFP, but can subsequently be adopted by UNHCR and other partners too, because it has multiple wallets, up to 9 maximum, and each wallet can be used by different agencies to deliver smart assistance and ensure protection and dignity to refugees,” said John Paul Sesonga WFP’s Communications associate.

Officials say that mobile money solution has been in existence in Rwanda and is more popularly used even among the refugees. However, the multiple wallet debit card is a more innovative solution and though new to the market, it has been tried and tested in larger operations in Kenya, Jordan and Lebanon with positive results. 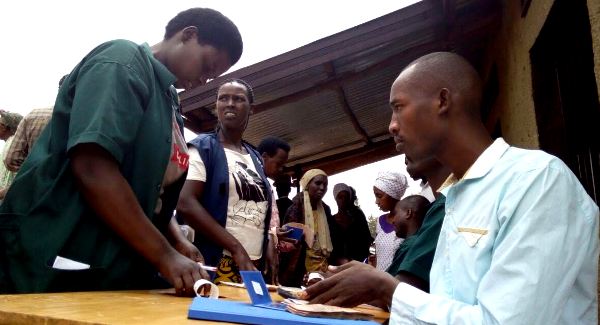