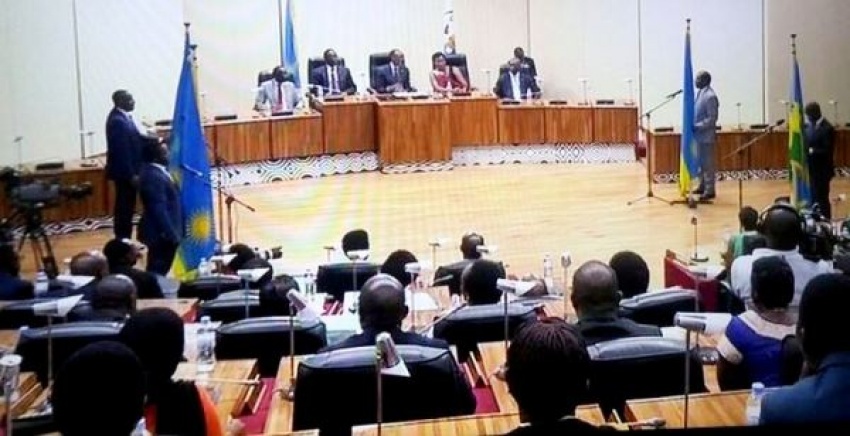 President Paul Kagame on Thursday pushed for new work ethic in his government – branding the slow pace of operations as “bureaucracy”.

“If you want good things you should be swift at everything you do,” said Kagame, warning officials to avoid being caught up in bureaucratic delays.

“Just like in this event where all appointees took a joint oath.”

Kagame was presiding over the swearing-in ceremony of five new cabinet members at the parliament.

He said; “Everyone complains about bureaucracy but you each play a role in sustaining it. We have to keep working to do better and faster. Four cabinet members took oath all at the same time and it was still effective. The same way, you should not loose time into bureaucracy.”

“Those who have been replaced still have a role to play somewhere else. It should be clear that you will have work because responsibility doesn’t go away. You will need to contribute and perform,” Kagame said in a short speech to set an example of time management.

The whole event last about 36 minutes – setting a new record for time management at government functions. Often there have to be an entertainer and speeches from different line officials. At the cabinet swearing today, except for the event MC, there was no other speech.

The President said the swearing event was swift; “It was quick and flawless,” Kagame said, commending the joint taking of oath by four new state ministers.

He also paid homage to Senator Jean de Dieu Mucyo – whose death shocked the country across all society.

“Mucyo was a good leader who was very humble in his work and life…we should be thankful of him” Kagame said.

The president also wanted adjustments made to the recent cabinet reshuffle to include the new appointee to the United Nations among cabinet members.

Valentine Rugwabiza was on Tuesday appointed Rwanda’s new Permanent Representative to the United Nations in New York replacing Eugene Richard Gasana who was dismissed in August.

“I would like to ask for rectification to include the New Envoy to the UN on the list of cabinet members. People may not see how important it is, but for me, It eases my job,” said President Kagame.

President Kagame said that Rugwabiza is going for a very important assignment because she is not going to represent us in a country but in many nations; “Anytime she will come for leave and there is a cabinet meeting, she will have to attend.”

The new cabinet members who sworn in today include; Esperance Nyirasafari Minister of Gender and Family Promotion.

Vincent Munyeshyaka is State Minister of Socio-economic development in Ministry of local government.