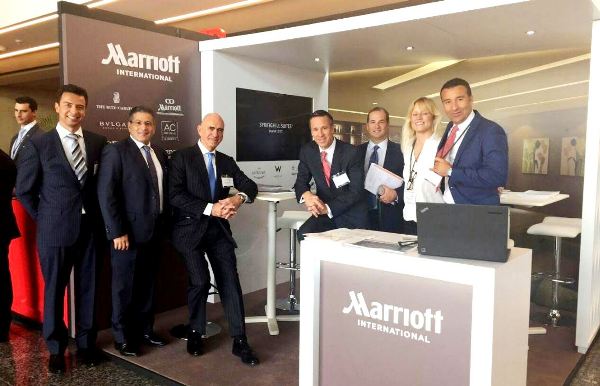 A day after unveiling a massive 254 room Kigali Marriott Hotel – its parent company confirmed Wednesday that another of its global brands was on schedule to open in Kigali.

Sheraton Hotels signed and is on course to coming soon to Rwanda, said Sorenson on day one of the Africa Hotel Investment Forum (AHIF) taking place 4-6 October 2016 at the Radisson Blu Hotel and Convention Center.

Sorenson was speaking on the issue because effective since last week, Sheraton Hotels parent company is under Marriott ownership.

In Kigali, construction of Sheraton Hotel Kigali began in April last year in the golf course area of Kigali – as part of a $200m Century Park and Hotel Residences project. The 136-room Sheraton Kigali will feature signature Sheraton experiences, including the state-of-the-art equipment like the Sheraton Club Lounge and rooms and many others.

At his appearance in Kigali this morning, Sorenson also said existing regional restrictions to free movement of people are posing a great threat to hotel businesses.

The Rwandan hospitality industry has experienced a near-explosion in a very short time. In just 10 years, hotel rooms jumped from 630 back in 2003 to over 10,000 hotel rooms today, said Francis Gatare, the CEO of the Rwanda Development Board.

Meanwhile, data also released at the Hotels Forum shows that back in 1994 and the previous years when Rwanda almost ended in the abyss, international visitors were a rarity here.

Only 1,052 tourists came to Rwanda in 1993 – as the country was headed for complete breakdown – which would end up in the 1994 genocide against Tutsis. However, huge political turnaround brought more than 1.2million tourists last year, according to industry figures.