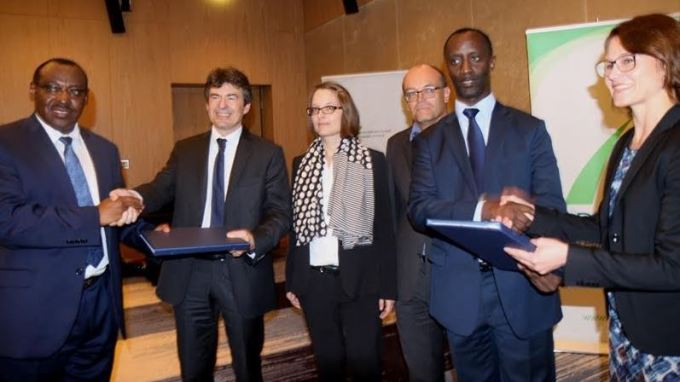 Rwanda has launched a fund allowing Small Medium Enterprises (SME) to borrow at lower interest rates to make a permanent presence on the regional market.

According to the agreement, KfW will channel €8.5 million to BRD and the latter will allow loan applications from SMEs that export up to 40% of their production, with a turnover ranging between $50,000 and $1million, at lower interest rates.

Commercial banks will also be allowed to borrow from BRD and to lend to traders at lower interest rates compared to the current 14% and beyond.

The fund follows economic support agreements signed earlier between Rwanda and Germany, especially a component that is meant to support the Export Growth Fund.

“I couldn’t wait to see the signing of the funds and I came here to personally witness and make sure it’s real. This fund is very important to realizing our export targets,” Minister of Finance and Economic Planning Amb. Claver Gatete said, adding that negotiations for these funds have been crucial to Rwanda.

The Director of the KfW Office in Kigali, Markus Bär, said the initiative does not come as a competition with commercial banks on loan schemes.

“All we are doing is to enable the SME’s to work effectively so that they can do business with banks,” Bär said.

Going by the data from National Institute of Statistics of Rwanda (NISR), in the third quarter of 2015, the country exports reached $ 96.14 million compared to $ 481.10 million imports and $ 46.01 million re-exports.

Much as the country registered a 0.3% increase in its total trade to $623.25 million, the difference between exports and imports remained wide.

Alex Kanyankole, the Chief Executive Officer of BRD, said these funds will boost exports as a key priority of EDPRS 2 which intends to raise living standards and reduce poverty in Rwanda.

“We already have some other Export Growth Funds (EGF) from last year, and the government has added Rwf1.5billion to this project,” Kanyankole said.

The EGF facility is designed as a single facility with three separate windows, an investment catalyst fund, a matching grant fund for market entry related costs and an export guarantee facility.

The windows were developed to respond to exporter’s most pressing financing bottlenecks.