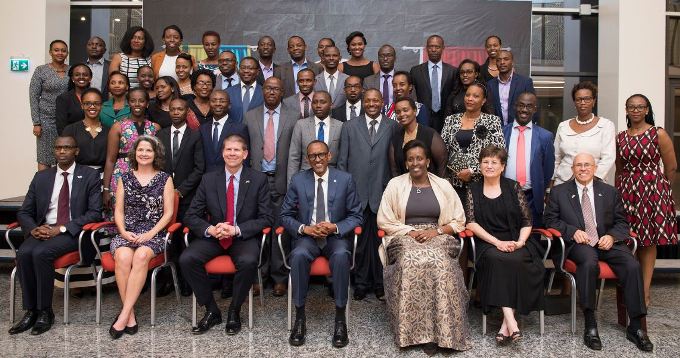 Ten years ago, President Paul Kagame flew to the United States and visited Oklahoma Christian University where he was conferred upon a honorary doctorate degree – It was from then that he established a long-term partnership.

Under the partnership so far, 341 Rwandans have graduated from OCU; 157 from US-based campus and 184 in the MBA program based in Kigali. Of these, 131 were Rwandan Presidential scholars, with three successful graduations locally.

“By showing that Rwandans can excel, you played an important part in ensuring that opportunities you enjoyed would multiply. That is why it is so important to continue this journey together for many more years,” President Kagame said during the 10th anniversary celebration of Rwanda-OCU Partnership held at Kigali Convention Center on Friday.

OCU has a state-of-the-art campus worth US$6.5 million built on the government-donated 21-hectare piece of land at Kicukiro, Kigali city.

With a campus in Kigali, the cost of four students sent to study in the United States can cater for 16 Rwandan students studying at Kigali campus.

The courses are completed in one year for fulltime students at a value of about U$9000 for each student.

Rwandan students studying at OCU have a cumulative Grade point average (GPA) of 3.79 – an important factor when applying to U.S. universities.

Kagame said that besides OCU promoting education, the University management shares the same values and philosophy of excellence just like Rwandans which has been fruitful to both sides.

“The relationship with OCU is among the most productive and meaningful with institutions of higher learning around the world. Strength comes back to the shared character traits and positive mindset, which we seek to instill in our young people,” Kagame said.

“When each of us performs to our best, we create new possibilities for others that may not otherwise exist,” he added.

Aline Kabanda, who spoke on behalf of the OCU alumni, said that their association launched a fund with initial $50,000 pledge, to further support the University’s growing relationship with Rwanda.

Under the OCU-Rwanda partnership, 341 Rwandans have graduated from the university

For President Kagame, itis admirable to see OCU alumni coming together to give back to our country. The President and First Lady Jeannette Kagame pledged full support to the Alumni Association and the Scholarship Fund initiated by Rwandan alumni of OCU in the United States.

In 2010, the same University awarded an honorary Doctorate degree to First Lady Jeannette Kagame for her significant contribution to the fight against HIV/Aids and poverty.

Dr. Mike O’Neal, the first Chancellor of the University of Rwanda and President Emeritus of Oklahoma Christian University, said the University’s primary interest in partnering with Rwanda was driven by the love President Kagame has for Rwandans.

Pie Masomo graduated from Oklahoma Christian University in 2012 with a degree in computer engineering but learnt more than he bargained for.

It is a great experience to study at OCU because we have forged many organisations between Rwandans and Americans. One thing that I learn is to Christian values and sense of helping others” Masomo said in video interview.