Government announced Thursday that it will in the coming days start feeding more than a million most vulnerable people with fortified foods to deal with a stunting burden that is affecting negatively on the national economy.

Between 4000-5000tonnes of nutritious food made from maize and soya beans will be ferried to health centers across the country to benefit families under the Ubudehe category 1 – who are considered as poorest in the country. The program will run for the next twelve months, officials said.

This project will create 300 direct jobs and work with over 9,000 local farmers.

The food will be supplied by Africa Improved Foods (AIF) Rwanda, a $45million food factory operating since 2015.

The factory, located in Kigali Special Economic Zone is already producing fortified blended foods on order from Government of Rwanda and the World Food Programme (WFP) to help address malnutrition and stunting in young children. The products are not for sale.

“With this state of the art facility, we have started producing nutritious products intended to address malnutrition among vulnerable population segments such as pregnant and breastfeeding mothers, older infants and young children more especially in the first 1,000 days of their lives,” said Prosper Ndayiragije, the Country Director of AIF Rwanda.

The complementary fortified flour for porridge comes in five different products, for children, for mothers with some of the specialized fortified blended foods product already in circulation among refugees under the World Food Program.

According to the Integrated Household Living Conditions Survey (EICV4-2015), 38% of Rwandan children under age five have poor feeding and face stunting while 9 percent are underweight throughout the country. 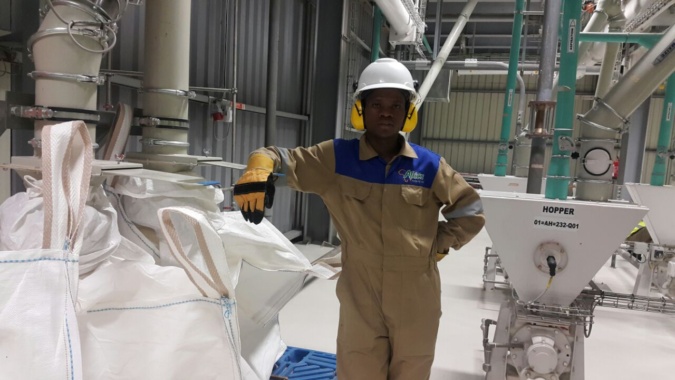 Beside the social protection deal, the factory which has capacity of producing 45,000 tonnes of food annually will also supply local market. It will be competing with existing food factories like Minimex and Duhamic Adri.

These purely commercial products will be on local market effective mid-February.

Officials from the company say they will be exporting its products to Uganda and DR Congo. They are targeting the continent.

Its new international standard factory and Buhler equipment is expected to set new standards in the milling sector.

This feeding project is not the first.Through ‘Gikuriro’ programme, a USAID funded integrated nutrition project launched in May 2016, government and its partners has set aside a five year $19million plan to reduce malnutrition in eight most vulnerable districts across the country.

In 2013, Rwanda launched the ‘1000 days’ national campaign to combat malnutrition with an aim of improving maternal and child health in the country: It has been scientifically proven that the 1,000-day window has a profound impact on a child’s ability to grow, learn and thrive.

A malnutrition study conducted last year by government, dubbed ‘Cost of Hunger Study in Rwanda: Child Under nutrition in Rwanda Implications for Achieving Vision 2020’ revealed that fighting underweight due to malnutrition costs the country Rwf65 million per year.

“The cost of malnutrition is borne mainly by the family with a 74 percent contribution to this burden. An effect on education includes 327,500 children repeating a class and 13 percent of this is associated with stunting. The cost of the nation on education is Rwf 2.4 billion,” reads the study.