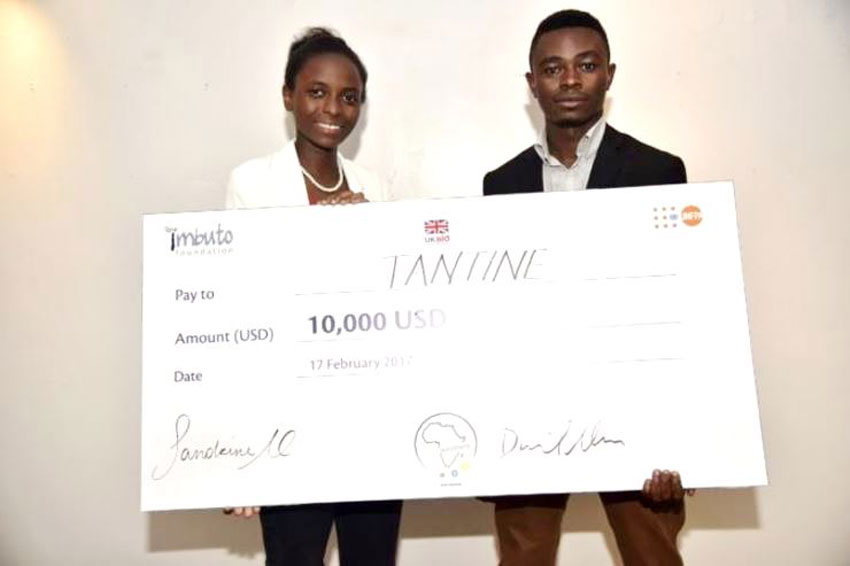 Seven months ago, twins won a $10,000 for developing an application to address reproductive health issues among Rwandans.

Their application ‘Tantine’ (Auntie) – where one can ask any question related to sexual reproductive health and get an answer, was among the best four initiatives at the iAaccelerator challenge 2017.

Today, Sylve Muzungu Hirwa and his twin sister Sylvie Uhirwa have started using the funding which was presented by Imbuto Foundation in partnership with UNFPA in February 2017.

“Currently we have created more content for our website and we have also launched a new mobile App that people can easily download on google play store,” Hirwa said.

So far, Tantine Group Ltd has used $5000 – half of the grant for developing the android application, website content, and development since February.

“The next move is “to focus on doing aggressive marketing to acquire more users,” he said.

Tantine App compatible to all devices is available on Google play store and can also be downloaded from their website www.tantine.rw.

The application allows adolescents and the general public can ask any question related to sexual health and get an answer including questions that society considers taboo.

Currently, the website attracts traffic of 1500 visitors daily up from 400 visits. The target is to reach  more than 5,000 visitors per day.

“We want to make our culture a route to solutions as we used to talk to our aunties; we want to keep the culture but in a revolutionized way that is digital and easily accessible,” Hirwa explained.

Tantine App was among the ten finalist at the Miss Geek Africa – a competition aimed at rewarding best young girl innovators of ICT solutions in Rwanda and Africa.

The App did not make it to the top three on grounds of profitability of the venture – a question raised by judges at the competition during Transform Africa Summit 2017 in order to walk away with a top award of Rwf3million.

Nevertheless, the twin App developers say that they managed to learn new marketing strategies from the Miss Geek competition and the current plan is to become profitable venture.

“We are planning to sell data to policy makers, research organisations dealing with reproductive health especially in women’s health as a way of becoming sustainable,” Hirwa said.

The other three finalist projects; Girl District, ‘Tubiganireho (let’s talk about it) TV show’, ‘Umbrella’ – remain at the initiative (start-up) level and have not been developed into profitable ventures.

However, Imbuto Foundation – a philanthropy organization founded by First Lady Mrs. Jeannette Kagame, says monitors each stage of development and implementation for each winner in the iAccelerator programme to ensure growth and success of these projects.

“We keep working on their projects and besides the winners, we continue to support youth with innovative ideas.” said Sandrine Umutoni, the Foundation’s Director General.