After riding 11,614.9 kilometers away from her home country, Anna Grechishkina a Ukrainian motorcyclist has been spotted up north in Rwanda.

According to Grechishkina travelling around the world is about, “meeting and talking to people, sharing with them my stories and listening to theirs,” she told Kigali Today.

She travelled to Rwanda on her motorcycle after accomplishing her trip in Tanzania.

Grechishkina 38, is riding a Ukrainian registered motorcycle – AA 1086 (named ‘Little guy’). She was spotted riding in Musanze district in the Northern Province on Wednesday.

Anna arrived in Rwanda on September 4th to fulfill and share her childhood desire of helping others to dream big and to follow their dreams.

“It is not just kilometers under my tires and amazing landscapes around, for me also it is also about doing something useful in the countries on my way, not only to receive, but also to give,” says the Ukrainian rider.

Her motorcycle world tour started four years ago on July 27, 2013 in Kiev city.

So far Grechishkina has been in 32 countries out of 50 targeted on her whole tour plan.  Rwanda is one of the 10 African destinations as she continues across the continent.

Through her project “I have a Dream” – Grechishkina believes that she can change the world – one person at a time and is determined to attain this goal.

Grechishkina also visits many schools, orphanages and hospitals for motivation conversations through telling her story as a way of motivating others.

“Even if I changed one person throughout this trip, this would make a difference in the world and my dream would come true,” she told Kigali Today adding, “Follow your dream; don’t be scared to take the first step.”

However, this Ukrainian biker says she faces difficulties of funding, expenses and bad roads, but says Rwanda has been easy on roads and that the people are welcoming.

“I cannot go back home, there is no peace, and no family; but all is here with me as I meet people,” said Grechishkina.

After Rwanda, she has plans to continue to Uganda, Kenya, Ethiopia, Sudan, and Egypt as she contemplates on her European tour. 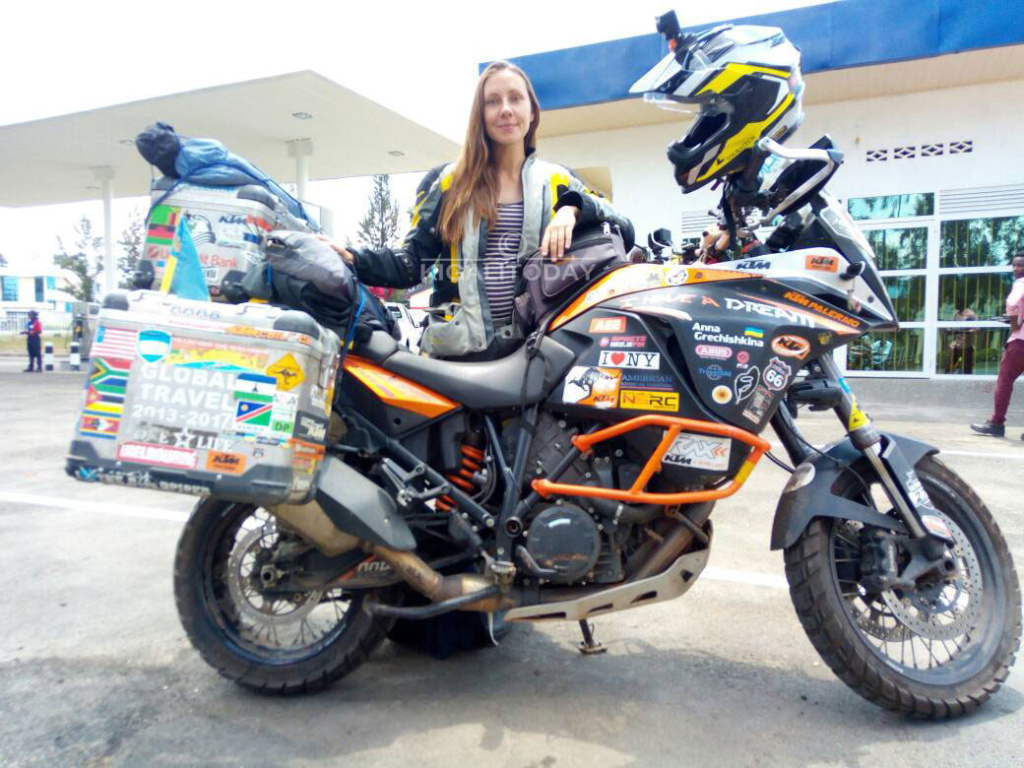 As a child Grechishkina always enjoyed travelling –by train or by car and after a few long trips to India and the Middle-East, she thought of going around the world while visiting as many countries and places as possible.

She started off with just $1000 and a donor bike– leaving behind her career working in Human Resource at a bank in Kiev to follow her dream.

What was originally supposed to be a two-year, 100, 000 kilometer trip has extended into a desire to conquer the world on a motorbike.

Grechishkina says she is more than halfway to breaking the current Guinness record for longest female solo motorbike ride- which is held by Benka Pulko (Slovenia) who travelled 180,016 km in 69 countries and seven continents.

The Africa trip is the biggest challenge for her yet considering this section of her journey as one of the most important compared to North America and most of South America, Australia and large parts of Asia and Russia.

Grechishkina says she once spent three weeks in the palace of the princess of Thailand on her trip in 2016, but she knows it is not going to be the case in Africa.

The part of her trips that she enjoys the most is to meet new people and make new friends and the most difficult part is to say goodbye.

From this global trip, Grechishkina plans to publish more books to create awareness of life in other countries. She has already published one book- “The world from my bike-photo meditation on the road” released in July 2017.