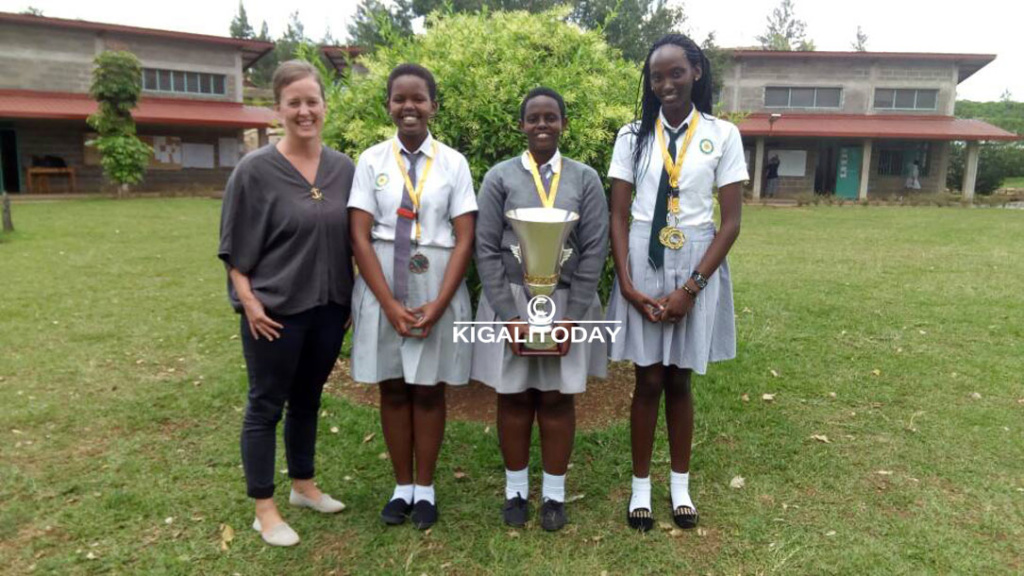 It is a sunny Tuesday morning and residents from Ramiro center, Gashora sector Bugesera district are busy with their daily activities.

The bars, the motor taxis, buses and people crisscrossing make the entire neighborhood busy. Ramiro center is situated 28 km away from Nyamata town.

After travelling 5km from Ramiro center on a long feeder road, there is a school – ‘Gashora girls Academy’ well known around the sector.

“I was born here, but ever since the school was established in 2010, I have never seen any girl from the school loiter around this village. When one needs to go out, their leaders call us to go and pick them.

Mbonigaba is speaking from experience about this school which has won trophies from different competitions inside and outside Rwanda.

At a recent debate competition held in Uganda, Gashora girls trounced other schools emerging as top performer in ‘Africa debate Championship of 2017’ that took place from September 8-15th.

KT Press visited the school to interract with winners and their trainers.

Arriving inside the school compound one may think nobody lives around because it is extra-ordinarily quiete for a school and only birds singing can be heard.

At a red colored gate, two security guards in blue uniform with the school badge oblige everyone coming to the school to produce an identity card.

Inside the compound, a green and well- cut vegetation welcomes you with simple buildings in baked bricks and high- quality roofing sheets.

On the other end, the school is surrounded by two lakes Mirayi and Rumira which provide a fresh air breeze and green vegetation.

Inside the Campus, it is studying hours and most students are in classrooms. However, the form six students are sitting in the garden preparing for national exams scheduled for November this year. 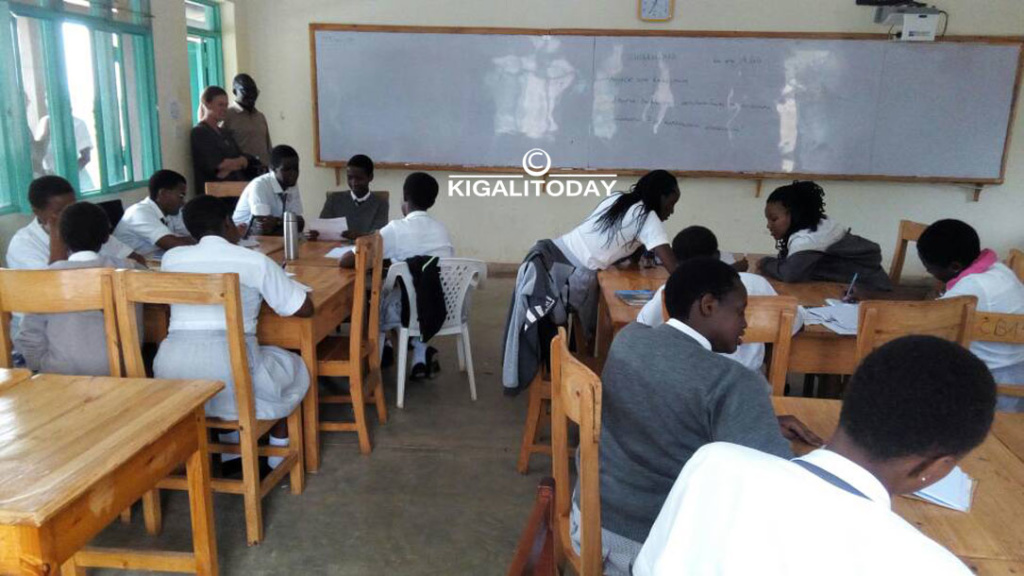 Students of S6 in class with lecturers

In a grey skirt; white shirt; black shoes matched knee length white socks, a green tie and braided hair, Natasha Teta Semwaga 17, is discussing in the garden with one of her tutors.

Semwaga is one of three girls that comprised a team that won the Africa debate championship.

Gashora school fielded two teams of six girls at the competition. However, only one team that was composed of Natasha Teta Semwaga 17; Cynthia Cyuzuzo 17 and Nikitah Isabella 17 won the trophy.

“Both teams qualified for the final rounds, but the judges had to consider points from the first rounds because two teams from the same school couldn’t compete in the finals,” said Samantha Bell, the school debate coach.

Gashora school scooped medals and the winners of the championship; Semwaga the best overall speaker; Isabella the 3rdbest speaker while Sylvie Mahoro Wairimu 17 from the second team was awarded Country best speaker.

All the girls study sciences including Physics, mathematics, Biology, chemistry and geography at Gashora girls Academy.

It is the largest debate competition in Africa organized by the Ugandan government to help youth find solutions to problems that affect them and their societies.

The debate was around subjects such as beauty contest, African history, economy and pan- Africanism among others.

“Scientific subjects were not involved. Sciences give straightforward answers, one plus one is two and things alike,” said Isabella.

“It doesn’t bother us to discuss about human interest based subjects though we study sciences because that is actually what the society needs,” added Semwaga. 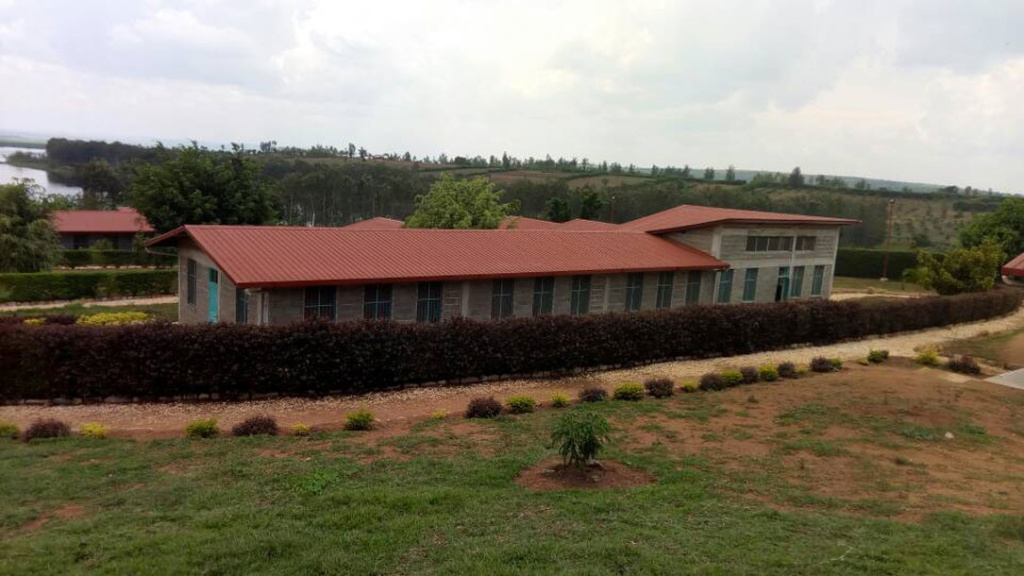 The school is known for winning world debate competitions including the latest World debate championship.

“When we heard that Tembisha and Mengo School from Uganda were coming in; we were so scared but we were surprised to hear that they feared us instead. They really had good dramatic ways to present their topics but they lacked content while we had both,” Cyuzuzo narrates

According to the girls One of the subjects that helped them to come out best was about ‘Africa to adopt the one child policy’ to avoid over- population which they stood against.

“Mengo School was supporting the idea while we were against it. We thought the only way to avoid over-population in Africa is for States to ban polygamy and to promote family planning strategies,” said Isabella.

Samantha Bell, the debate coach told KTPress that what helps girls to stand out in competitions is the ‘extra- curricular system’ that the school promotes. Every student has a club that she participates in.

“The school promotes after class activities the same as it does for academic activities,” Samantha said

At Gashora school, there are over 20 clubs including Dance club, art club among others but the debate club is the largest with over 50 students.

Samantha also said that during the competition, the girls had a team spirit which other schools were lacking.

“The team was like one person though they were three. One of the things I like about them is that gender does not stop them from doing what they want and how they want it. I simply show them the right direction and let them think.”

“In August, we knew we were participating and immediately started preparations including watching debates from the world championship to study the best debate styles. I even designated a third team to assist them with intensive research and feedback,” Samantha said.

Gashora Girls Academy has a library, a computer lab and the ability to watch news during weekends which enable them to be updated on what is happening in the country and around the world.

The school has calm environment and green scenery favorable for students

For example, the school organized an event ‘Model UN Simulation Conference’ on the sidelines of The 72ndUnited Nations General Assembly Wednesday 20th September.

Students will be in places of the 65 countries represented in the Assembly and interpret what they think countries will be presenting.

“I will be representing Russia and express the country’s take on the problem of refugees,” said Semwaga.

Alain Munyaburanga, the school Headmaster told KTPress that the strategic situation of the school helps students to think and dream big.

“We are surrounded by lakes and far from the main road which enable our girls to study well in a good environment. Also we promote freedom for everyone which other schools blame us for.” 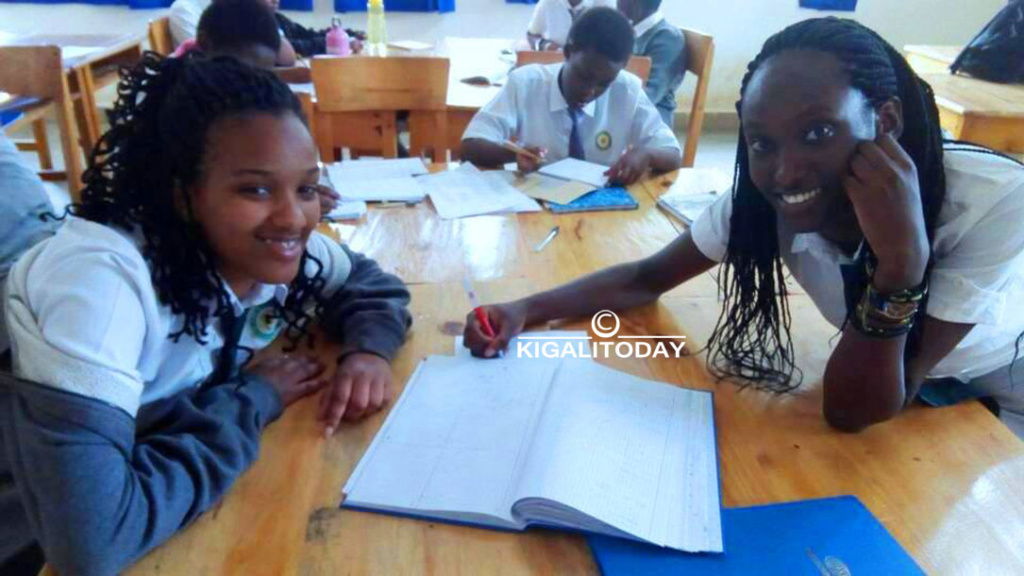 “We offer them liberty to choose. For example they choose the tutors, even me to be hired I was interviewed by seven students. We actually involve them in every single decision we take which according to me helps them to feel loved and valued taking them to success,” Munyaburanga said.

The school hosts 276 girls from different districts based on their performance.

It was founded in 2010 by two American women Shal Foster and Suzanne Sinegal McGill. It is an upper-secondary girl’s boarding school

The school is preparing for the 5thgraduation on October 8th where 85 girls are expected to graduate.

The school has won several competitions including Youth Entrepreneurship debate competition in 2015 among others.