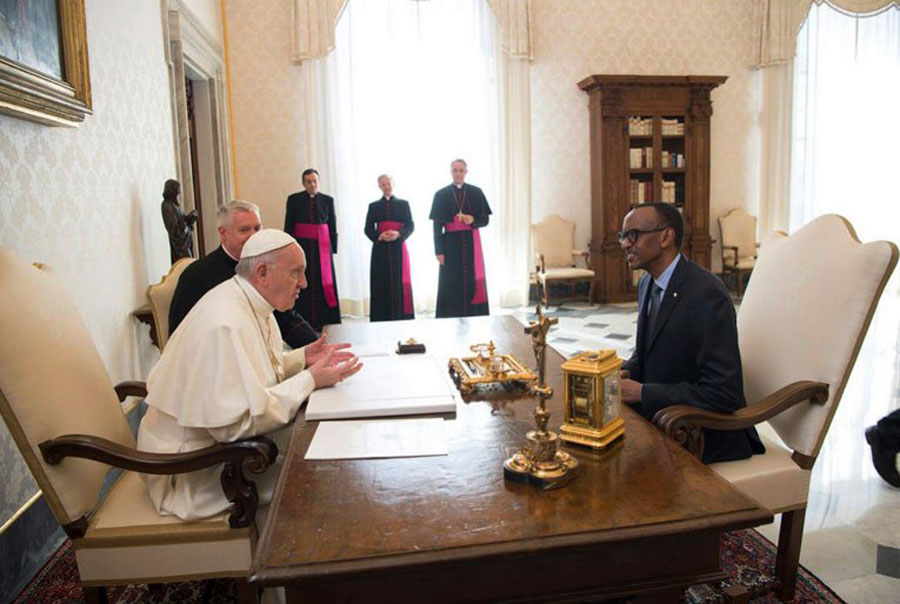 For two decades, relations between the Vatican and Rwanda government had remained very cold because the Catholic Church persistently shied away from apologising for its role in the 1994 Genocide against the Tutsi.

Despite the cold relations, a lot of tireless and behind the curtains talks had been going on for long.

In March this year, President Paul Kagame flew to China for strategic upgrade of cooperation between the two countries.

However, immediately after his two-day state visit, Louise Mushikiwabo, Foreign Affairs Minister announced via twitter, “After a successful visit to China, President Kagame is now in Rome, on invitation by the Holy Father.”

It should be remembered that before Kagame’s trip to Vatican, back home, Rwandans were for four months still synthesising a statement issued by the Catholic Church’s local Episcopal Council apologizing for participation of some church members in the 1994 Genocide against Tutsi.

Kagame himself was not convinced by this apologetic statement saying he preferred an apology from the Vatican not just the local Episcopal Council.

“I don’t understand why the Pope would apologise for sexual offences, whether it is in the US, Ireland or Australia, but cannot apologise for the role of the Church in the Genocide that happened here,” the President had said during the National Dialogue in 2016. 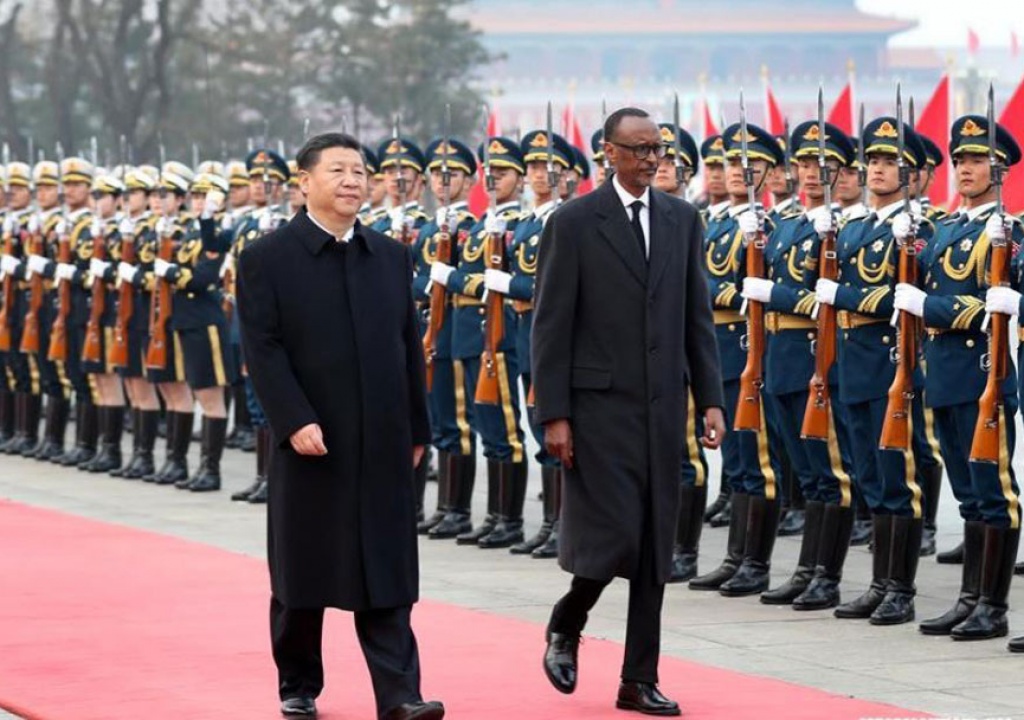 Around this period, Rwanda was preparing for the 23rd commemoration of the Genocide against Tutsi. This meeting with Pope kept Rwandans anxious.

To Rome, President Kagame was accompanied by the First Lady Jeannette Kagame and were received by senior Vatican officials.

Kagame alone was led into the Papal Office to meet the Pope. Their meeting lasted for about 30 minutes while the First Lady was given a guided tour of the Apostolic Palace.

After the meeting, the Vatican issued a statement saying the Pope conveyed his profound sadness, and that of the Holy See and of the Church, for the Genocide against the Tutsi. He expressed his solidarity with the victims and with those who continue to suffer the consequences of those tragic events.

He reaffirmed anew God’s forgiveness for the sins and failings of the Church and its members, among whom priests, and religious men and women who succumbed to hatred and violence, betraying their own evangelical mission.

“Being able to acknowledge/apologise for wrongs in circumstance/cases like this is an act of courage and moral high standing typical. We will all be better for it!”

While Vatican-Rwanda new chapter constitutes a climax in Rwandan diplomacy this year, many events brought Rwanda closer to the world and the world even much closer to Rwanda. 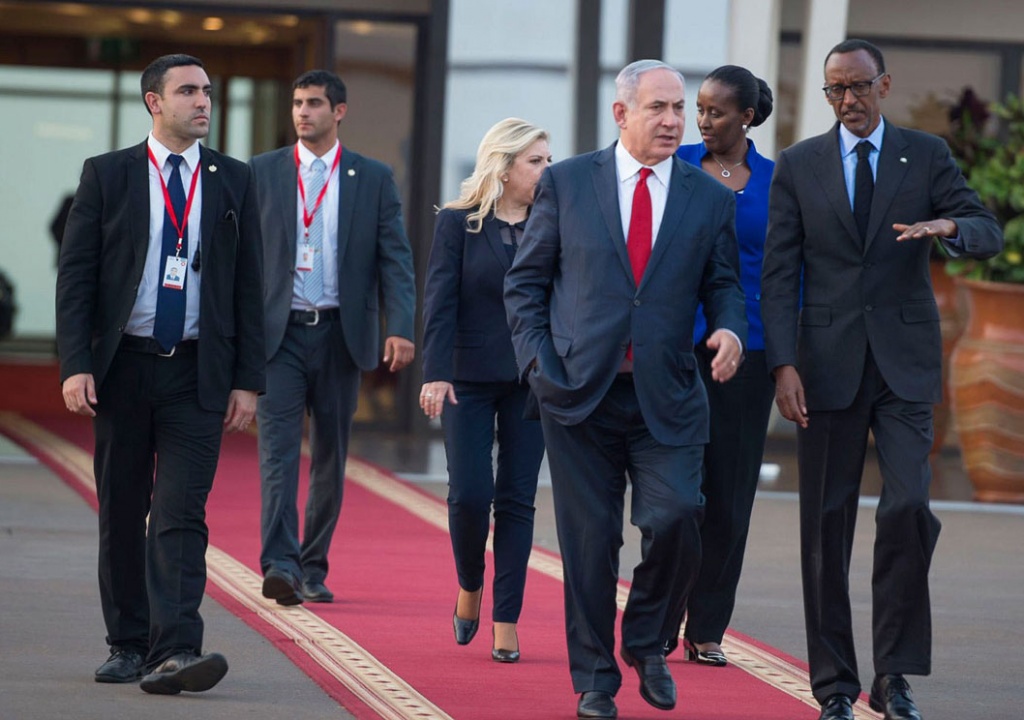 Rwanda maintained excellent relationship with its friends, including Israel.

“My message today is simple. Rwanda is, without question, a friend of Israel,” said President Kagame at the American Israel Public Affairs Committee (AIPAC) policy conference in Washington DC in March 2017.

“Israel has a right to exist and thrive.”

President Kagame said that what Israel went through – the Holocaust is similar to what Rwanda is going through; recovering from the aftermath of the Genocide against Tutsi.

This brings citizens from both countries closer to each other.

In June, 20 CEOs from Israel were in Rwanda to pitch business investment-Israel itself takes hundreds Rwandan students for internship in modern agriculture.

The biggest diplomatic gesture with Israel this year however, was a visit by President Kagame to Israel in July.

Speaking while receiving President Kagame, Prime Minister of Israel Benjamin Netanyahu said that Rwanda has a particularity of speaking her mind at all international meetings and this reinforces the already excellent relationship in both countries that experienced a terrible genocide tragedy in their recent history.

“We are looking forward to reinforcing our collaboration with Israel on common challenges and issues of mutual interest,” Kagame said.

Indeed, collaboration between Israel and Rwanda is noticeable. In November, Israel announced its plan to open embassy in Kigali. Already, Rwanda has its embassy in Tel Aviv.

The President said that for investors to come all the way from Europe, America and other continents is because they face “more risks than we actually have…for them they know it.”

2017 included several state visits to Rwanda. Egyptian President Abdul Fatah al-Sisi was in Kigali in August where he called for peaceful coexistence minutes after honouring victims of the 1994 Genocide against Tutsi in Rwanda.

He said the world should build peace not hate.

Similarly, President Kagame also made several other visits, and he always took with him a delegation that presents the country and its business opportunities to lure investors.

One such a visit was in India in January, Djibouti and China in April.

In Angola, and Kenya, President Kagame attended inauguration of Heads of State.

It is important to note that all these countries have exceptional bonds with Rwanda, especially in trade, investments and free movement of goods and people. 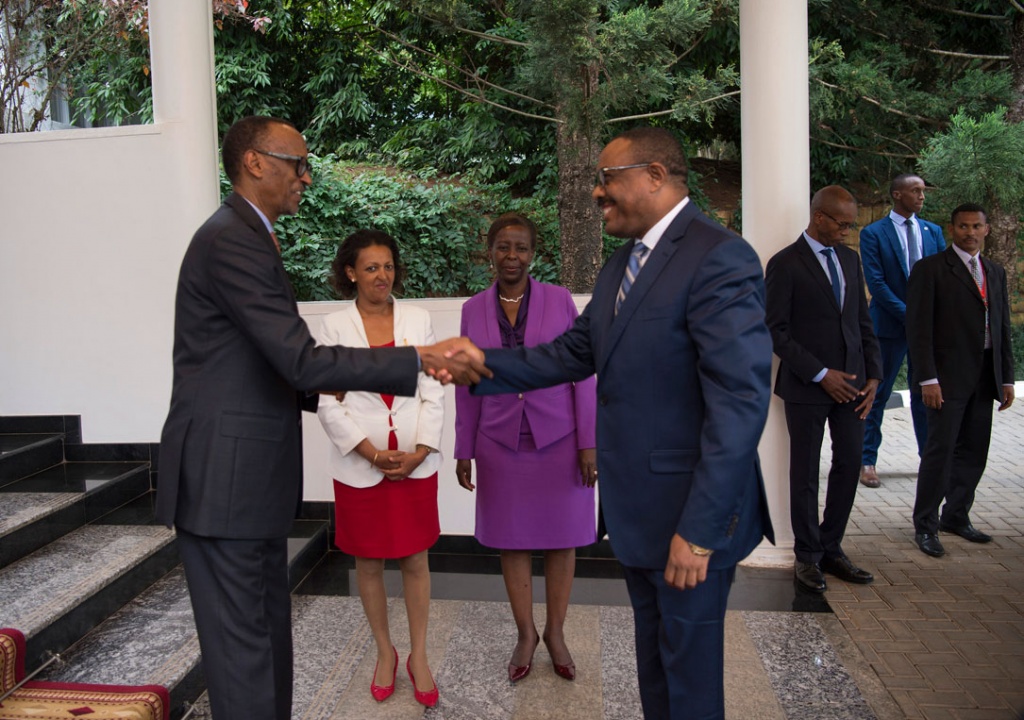 Year 2017 was not free of diplomatic incidences, and among others, France maintained its position to deny the 1994 Genocide against Tutsi where its officials and soldiers participated.

However, on October 29th Foreign Affairs Minister Mushikiwabo was hosted on TV5 Monde for an interview where she said that the battle by France to shield its officials that played a role in the Genocide against Tutsi is a battle they will lose.

“For us we think that the battle France is fighting for some of its politicians is a battle they will not win, because it is an unjust battle,” she said.

In July, a few days before ending his mission in Rwanda, Michael Ryan the EU commissioner in Rwanda also filed another incidence.

After stirring controversy through his tweet about a house that was being demolished to pave away for a bigger structure close to his residency.

However, his allegation was later dismissed and he admitted that he was wrong.

While hosting African diplomats representing their respective countries or organization s in Rwanda on January 2017, President Kagame declared the year 2017 ‘a period of cooperation, prosperity and democratic rule’ that will ensure better service delivery to citizen.

Defamation Not a Criminal offence in Rwanda Anymore

Rwanda’s Trade Deficit Down by 21%