Saturday March 10th was a Sabbath like any other where 200 worshippers flocked to Nyarunazi Adventist church in Nyabimata sector, Nyaruguru district.

It is a church situated at the buffer zone of Nyungwe National park where it rains a lot throughout the year.

On the fateful day, the church had among other visitors, a choir of 25 people who had come to proclaim to worship.

All went as planned until mid day when Berchmans Habimana, the senior pastor of the church invited the visiting worshippers to give the concluding round praise.

No sooner had they started singing than it started pouring, but the choir persevered.

However, some 10 minutes later, the pastor realized it could not work under the rain because no one could hear them anymore, though they had speakers.

“I stopped the choir, we switched off the generator and waited for the rain to stop,” Habimana narrated to KT Press.

However, the rain kept pouring and the Senior Pastor says he could keep his congregation active in that cold weather.

He stood up to request every Christian to open their hymn books and start singing to kill the boredom.

“My God! Upon reaching the pulpit, the incident I witnessed will never be erased in my mind,” said Habimana.

“I saw terrible lightning and suddenly, the whole congregation fell on the ground. Imagine seeing 200 people, all falling on the ground, not because of the Holly Spirit, but because of a disaster.”

Upon seeing the disaster from he gathered little energy and stepped forward to where his congregants were lying.

“This was the most trying moment of my life; they were almost not breathing. Indeed, some had already died,” said Habimana who grabbed the phone right away, and started calling every contact in his phone he thought could be helpful at that moment.

Habimana called the Sector Executive secretary, the police, the boss of Muganza tea factory for help.

“Intervention was quick; cars were brought to take dozens of wounded people to the hospital. However, some had already died.”

Indeed, the country fell in total shock following this thunder strike that killed 15 at this very church and two more people in other areas of Nyaruguru district on March 10th.

Interventions and support were hastened including emergency where local authorities and Muganza tea factory provided cars to rush the victims to hospital and then paid the medical bill and funeral costs for the deceased. 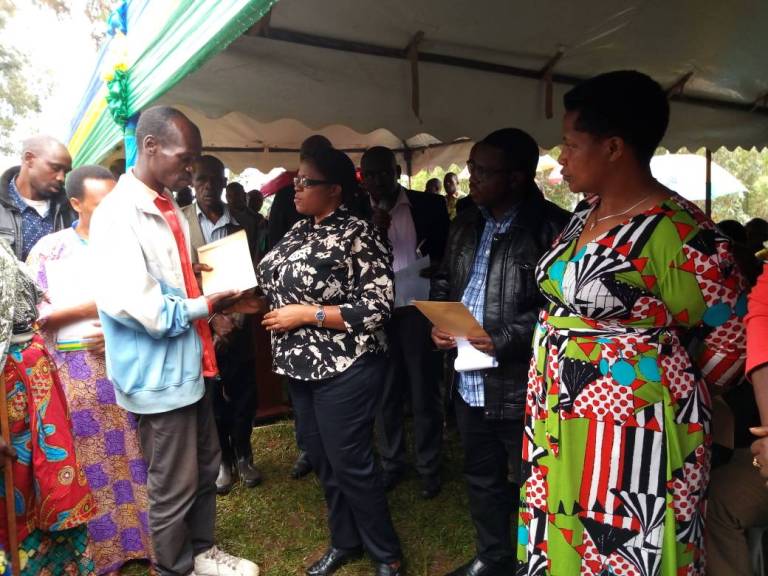 The latest in this support was on Wednesday where envelopes were handed to the families of the deceased.

“The Ministry of disaster Management and refugee affairs (Midimar) and Ministry of local government have extended each of the 17 families help of Rwf 50,000,” Vincent Nsengiyumva, the executive secretary of Nyabimata sector told KT Press on Wednesday.

He said more support will be provided in other forms.

Indeed, the families need support given the extreme cases that are involved. For example, Nsengiyumva cited cases of a family where a victim, Ayinkamiye Francine left three children.

“Her husband had divorced her. The children were taken to their grandmother who is also disabled,” said Nsengiyumva.

Strong memories of the loved ones

The senior pastor, the families and survivors of the Nyarunazi thunder strike have a lot to remember from the loved ones who passed away.

Murera Mateso from Bihembe cell last talked to his wife Clementine Habonimana on Friday9th when she was requesting him to “buy special food for them.”

Murera told KT Press, “she told me she misses maize paste and I went to borrow money to make her happy.”

After preparing the evening meal, the wife invited her husband and their two sons aged 5 and 2 respectively.

“I ate and went to sleep for a while because I work at night- I am a night guard,” recalls Murera.

He spent the following morning on guard, and, by the time he wanted to leave at around midi day, a child came running under the rain and told him that people had died at the church.

“I rushed to the church, started offering emergency services until someone told me that my wife was also among the victims,” recalls Murera.

He was ushered to a hall where they had put bodies of the victims.

“When I saw my wife among the bodies, I was speechless,” Murera said adding that he is going to raise her two sons.”

But what is Thunder Strike, Is it avoidable?

Few Rwandans know what the lightning strikes actually is. When some families lose a relative from lightning strikes, they assume that a jealousy neighbour who is against their development has bewitched them through lightning .

In a previous story Jean Baptiste Nsengiyumva, director of disaster risks reduction in Midimar dismissed this. He says that it starts from the atmosphere, especially in a cloud called “cumulonimbus”, which has electric fields.

When the wind augments in the cloud and mixes up the cloud’s particles, it increases the electricity in the cloud, reaching 30,000 kilowatt per hour, which is six times the capacity of sunlight reaching the earth.

At that extent, the electricity can either discharge itself in other clouds, reason why sometimes lightning strikes but do not reach the earth.

In other cases however, the lightning comes straight to earth, and it strikes the tallest thing it encounters in a particular area.

How to avoid lightening strikes

Nsengiyumva says people should avoid walking out during the rain, because water is a good conductor of electricity.

Carrying an umbrella, with a metal terminal is risky, and so is hiding  under a tree during while it is raining, because the lightning strikes would strike both the tree and the human being under it.

Most importantly, all Rwandans are encouraged to have lightning rods on top of their roofs. The conductor should have capacity to cover an entire building; otherwise, the lightning strikes would still strike the house.

Nsengiyumva however says that Rwanda is conducting research in the most lightning prone districts including Rusizi, Rutsiro, Karongi and Nyamasheke, all in the Western province.

The research will indicate specification of the required lightning rods for homes and public buildings.

“We are looking for a company that will tell us reason behind this increasing threat. Then we shall know which lightning strikes conductors to recommend to the communities around these areas,” says Nsengiyumva.