The most challenging week in Rwanda when country and friends of Rwanda commemorate over a million Tutsis who perished during the Genocide 1994 has arrived.

April 7th-13th and stretching  over a period of three months reminds every Genocide Survivor the very trying moment where hideouts were literally small enough to offer safe haven while a neighbor was no longer trustworthy.

In the first week of commemoration, all flags in Rwanda, at foreign embassies, at Rwandan embassies and high commissions and various organizations will fly at half-mast.

The United Nations and the African Union also join the country in the commemoration week.

No entertainment is allowed in the country, in whichever form, through whichever channel.

#Kwibuka24: the theme is Remember, Unite, Renew” which embraces country’s resolve for “Never Again”, for the unity and reconciliation, fighting against Genocide Ideology, and most especially, paying tribute to Genocide victims and supporting the Genocide survivors.

The president addresses the nation on morning of April 7th after lighting the Flame of Hope at Kigali Genocide Memorial where more than 250,000 Genocide victims are laid to rest. 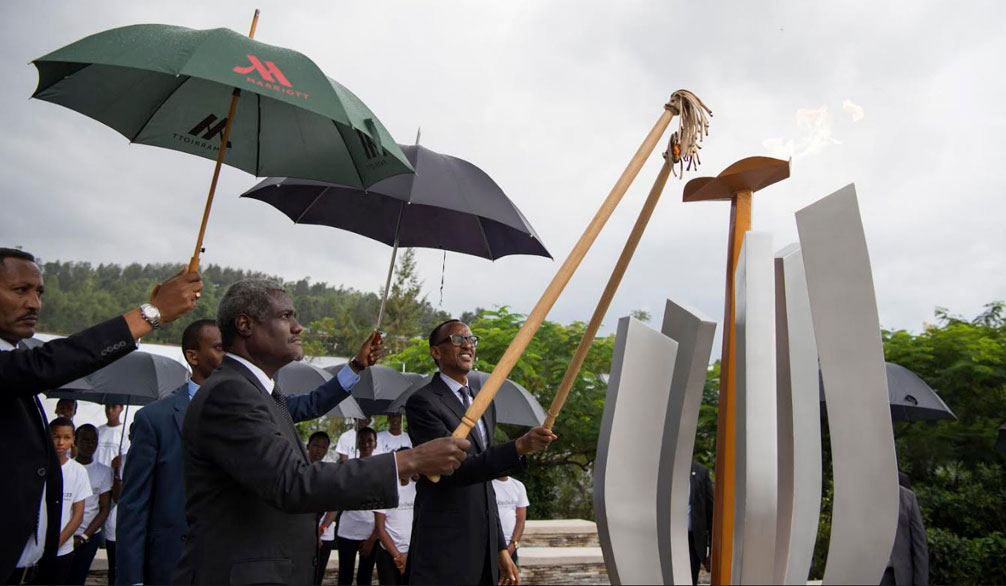 In the afternoon, the president attends the Walk to Remember event which is followed by a national vigil night at Amahoro National Stadium.

Songs, poems and testimonies make the main part of the vigil where also the youth read 100 names of Genocide victims.

Through the week, the community meets in their respective villages for Kwibuka sessions where a speaker develops a topic on the tragedy; how it was conducted and on the resiliency of the country.

Testimonies are also part of the sessions. Commemoration proceeds in institutions, schools and even families.

For the next three months, community will keep supporting the Genocide survivors in whichever way possible.

Showing compassion and love to the families has always alleviated trauma and contributed to social cohesion.

Sheltering them, giving them a financial foundation or any support intended to improve their wellbeing is encouraged, but the government always suggests that it should go beyond the three months period and become a lifestyle.

Every year, new remains of Genocide victims that are discovered are put in dignified resting places.

Some other remains also get relocated to a new loactions for better conservation. It will be the case this year in Muyira, Nyanza district where a memorial that was constructed will now be used to serve as a resting place for close to 90,000 victims.

The 1994 Genocide against Tutsi was a national wide manhunt; the Tutsi became the prey of every interahamwe in general and all unpredictable Hutus particularly.

The massacre was not just about killing; victims were massacred through the harshest torture and thrown to anywhere; rivers, pit latrines, quarries while others were left on the hills for domestic carnivores.

Cases of cannibals were also registered; extremist Genocide perpetrators ate hearts of their victims after eating their cattle and mercilessly hitting their children on the walls.

Meanwhile, some new components were introduced this year, while others were improved.

From the 24th Commemoration of Genocide against Tutsi onwards, mourners will still share testimonies, have other commemoration sessions, but if they want to read a mass or other religious rituals, they will find another occasion.

In most, if not all cases, a mass introduces the Kwibuka event, then testimonies of Genocide survivors, followed by addresses from several officials in attendance.

The intention is to limit the duration of commemoration to a maximum of three hours.

“In case it is not possible to respect this duration, local institutions examine the case and extend the time taking into consideration security of the mourners and their health,” reads part of the notice that was endorsed by Jean Damascène Bizimana, Executive Secretary of CNLG in February.

Apparently, in the past events, every participant could be given an unlimited time, but from now onward, every speaker will intervene within a limited timeframe.

For example, a prayer, by one representative of churches will last for a maximum 10 minutes, and a testimony, one hour.

“During the commemoration of the genocide, there should never be discrimination of churches, and for that reason, no Mass Reading or any other church rituals are allowed in Kwibuka,” reads the notice.

Another explanation to this ban of church ceremonies in Kwibuka, is that, “it takes a long time, yet all the mourners are not Roman Catholic Church Christians or part of the same religion.”

However, CNLG does not prevent the mourners from integrating the Mass or religious ceremonies, if they are a religious congregation which is remembering its members.

Speakers during commemoration sessions were trained so that they are equipped with right skills to give correct message.