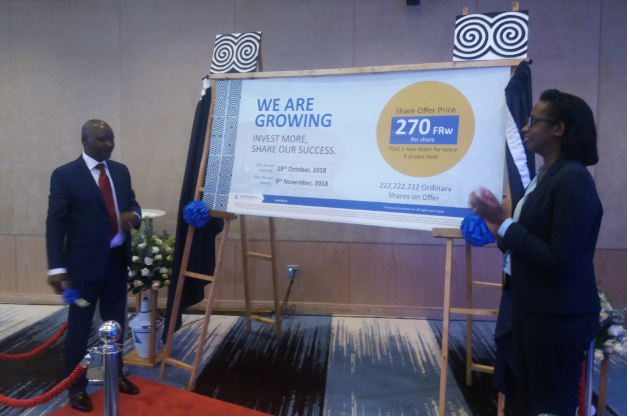 Bank of Kigali – Rwanda’s biggest financial institution has issued 7.2 million shares to its employees as part of its over 200 million discounted shares the bank put up for grabs.

On October 29, the lender officially launched its sell of Rwf222.2 million shares at Rwf270 each – following a Rights Issue by the Capital Market Authority and Rwanda Stock Exchange.

Through sell of the new shares, BK seeks to raise Rwf60 billion ($67.3 million ) in capital.

Thierry Nshuti – head of marketing at the Bank told KT Press that the Group set up an Employee Share Ownership Plan, as part of the Rights Issue and 7,200,000 new had been applied for by the staff since the official launch.

The shares given to BK staff represent 3.24 % of the Offer.

“The staff applied for the shares and we will wait for compiled report from brokers to ascertain how many shares were bought by our staff,” Nshuti told KT Press.

Meanwhile, the bank is conducting an online campaign to call for the last minute shareholders to take up the shares. The offer period closes tomorrow, November 9, 2018.

The shares have been up for grabs with a par value of FRw10 at and an Issue Price of Rwf270 per share in the ratio of 1 new ordinary share for every 3 Ordinary Shares held.

The bank, which will officially cross list on the Nairobi Stock Exchange on November 30, says its Rights Share will diversify the Group’s assets and mitigate transaction risks through a Digital Transformation Strategy.

Marc Holtzman, the Group Chairman said: “We believe the cross listing will access a wealth of new potential investors and increase our daily liquidity, which will be only to the benefit of our existing shareholder base and market.”

Mineduc Hands Over to Churches Duty to Build Nursery Schools