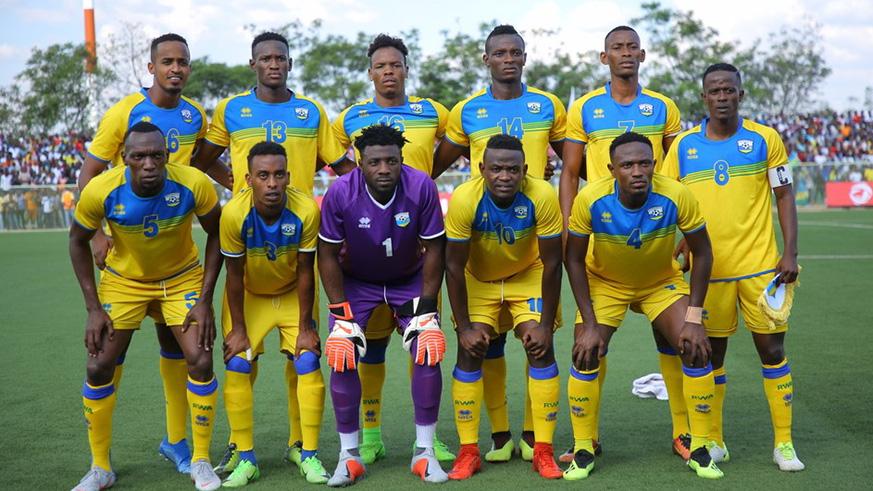 Rwanda’s Amavubi team which had mixed results this year, will start the new year ranked in 137th according to FIFA rankings

Rwanda have ended 2018 as the 137th best-ranked team, according to the final FIFA’s world rankings of the year.

The Amavubi Stars remained unmoved at 137th in the global ratings announced on Thursday 20, December.

On the continental rating, they are static as the 36th best.

The Amavubi Stars coached by Mashami Vincent last played to a 2-all draw to Central African Republic thanks to a brace from striker Jacques Tuyisenge before former France international Geoffrey Kondogbia ensured visitors shared the spoils in November.

Rwanda who are out of the 2019 AFCON finals following the bottom-place rankings in Group H will face second-placed Cote d’Ivoire in the final group match which will be staged in March 2019 away in Abidjan.

Across the region, Uganda Cranes have climaxed the year placed at 75, maintaining their position from last month and 16th on the continent.

There has been little movement on the December rankings with very few international games having been played.

Guinea-Bissau also moved up one place to joint 120 with Tajikistan, who have also lost two matches since November.

The only other African nation to move on the latest list is Zambia, who fell one place to 83, as they were leapfrogged by Oman on the back of two wins in the last month.

Belgium will begin 2019 at the top of the FIFA/Coca-Cola World Ranking, having preserved their single-point lead over France at the table’s summit and emerged as the Ranking’s ‘Team of the Year’.

Brazil (3rd, unchanged), Croatia in fourth and England complete the best five countries in the world.

The month’s biggest movers are Guyana (177th, up 3) whose CONCACAF Nations League qualifier draw against Barbados in September was recently reclassified as a forfeit win due to the Barbadians fielding two ineligible players.

Barbados was the worst mover, dropping by 3 places to position 162.

Europe accounts for 31 of the top 50 teams – two up from December 2017. Asia has also boosted its top-50 numbers from two to three, with these rises coming at the expense of Africa, which saw its representation drop from eight to five.

The next FIFA/Coca-Cola World Ranking will be published on 7th February 2019.