The 2019 Tour du Rwanda considered as Africa’s biggest cycling race takes place from Sunday, February 24 through to Sunday, March 3. There will be 17 teams competing for some big prizes.

This will be the first time Tour du Rwanda is held as a 2.1 category race following its elevation last year and it may be one of the toughest endurance events an athlete can take part in, but when it comes to collecting their prize money after eight days in the saddle riders will be reminded of just how tough the sport really was.

The total pot of prize money handed out at this year’s Tour is worth USD $51,000 and while the yellow jersey winner will take the USD$4000. Each stage winner will earn USD $1400 while the yellow jersey of the King of the Mountain, Sprints, Young rider, African rider, Rwandan rider and most combative rider will each take home USD $ 400 respectively. The best ranked team will earn USD $900.

Besides the stage winner, other cash prizes for the remaining top 19 best placed riders will earn from USD $710 down to $30 for 20th.

The Rwanda Cycling Federation (FERWACY) president Aimable Bayingana said in a KT Radio talk show this week that an increment in the cash prize was implemented due to the elevation of the standard of Tour du Rwanda.

“Following the elevation of Tour du Rwanda from 2.2 to 2.1 meant that we had to revamp every aspect related to the general organization of the Tour. With a 2.1 level, high profile teams have to take part hence as organizers, cash prizes have to be increased to attract the competition expected,” added Bayingana. 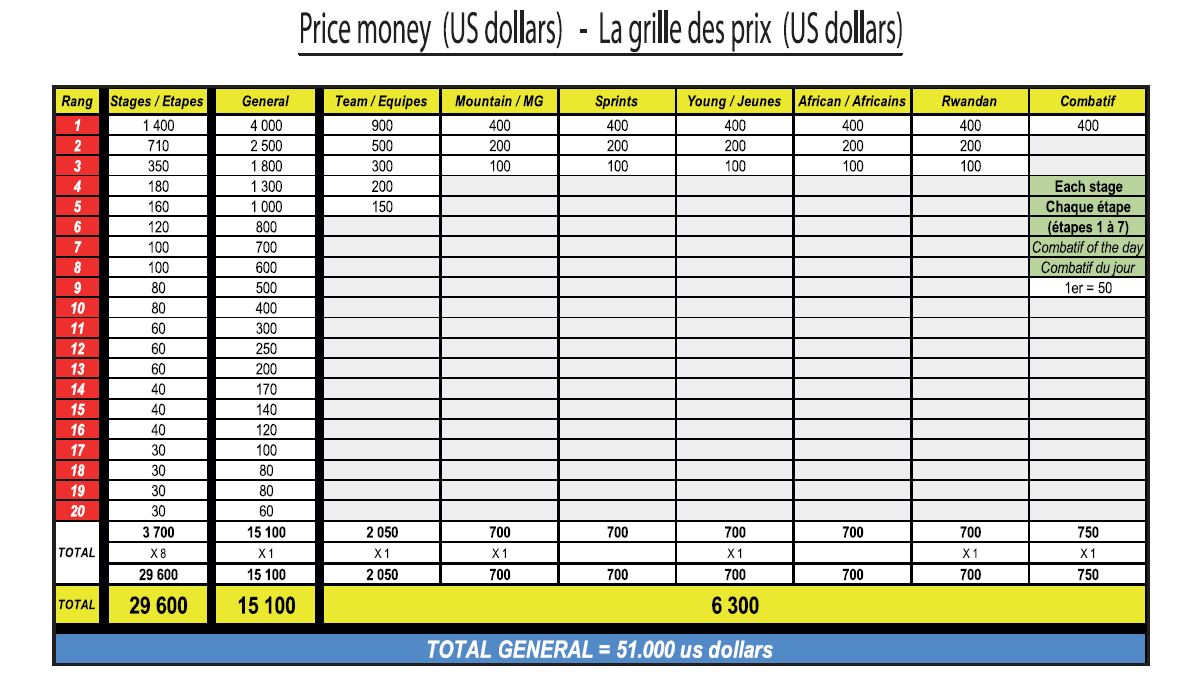 The 2019 Tour du Rwanda cycling race will start in Kigali and the overall winner will be decided on the ultimate stage with the famous ‘Wall of Kigali’, which the riders will climb four times before heading to the finish line at Kigali stadium in Nyamirambo.

This year’s race will see riders take on a gruesome stage 3 from Huye to Rubavu, a 213.1km race, the longest stage in the history of the annual event.

In total, the 17-team peloton will cover 959.1km over the course of eight days. Tour du Rwanda, which first became a UCI-Africa race in 2009, boasting seven stages and a prologue.

Unlike in the last ten years when Rwanda used to be represented by three teams, this time around the hosts will field just two teams – the national team (Team Rwanda) and Benediction Cycling Club, who have registered as a UCI Continental Team – each with five riders.

Rwanda’s Samuel Mugisha is the reigning champion. He is the fourth Rwandan to win the race after Valens Ndayisenga (2014, 2016), Jean Bosco Nsengimana (2015) and Joseph Areruya in 2017.