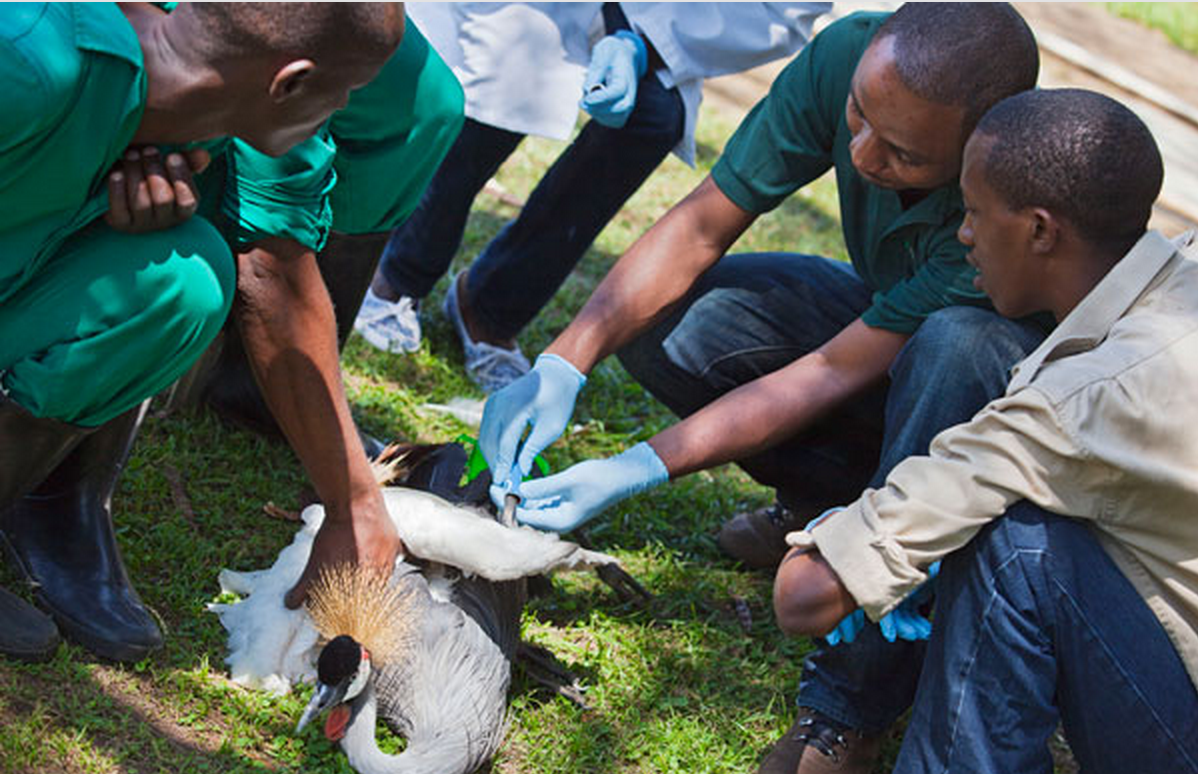 Olivier Nsengimana(second right) during treatment of a grey crane

Olivier Nsengimana, a Rwandan private conservationist has been awarded the ‘Future for Nature (FFN) 2019 – a prestigious international award that celebrates tangible achievements in protecting wild animal and plant species.

The annual award (FNN) worth € 50, 000 is given to 3 young conservationists each, for performed conservation work that is innovative, effective and sustainable, according to FNN website.

Held at Royal Burgers’ Zoo in Arnhem, Netherlands, FFN is given to best young conservationists by FFN foundation to candidates of any nationality or residence, not older than 35 years.

It aims at funding individuals for their outstanding efforts in the protection of species of wild animals and plants while also motivating winners to extend their professional network and strengthening funding basis.

Nsengimana presented his ongoing project of saving the endangered Grey Crowned Cranes in Rwanda and to combat their illegal trade.

In 2015, Nsengimana founded the Rwanda Wildlife Conservation Association (RWCA) that allowed him to continue his work on the Grey Crowned Cranes, but also expand to research and conservation projects connected to other endangered or threatened species.

Nsengimana targets setting a community of youth environmental club near Akanyaru wetland where youth will learn about the environment, take action to protect and care about their local area and be involved in tree planting events.

Grey Crowned Cranes are endangered due to poaching activities as well as high population density and issues of poverty and lack of awareness among communities about wildlife and the important role of the wetlands.

The population of Grey Crowned Cranes has reduced by 80% over the last 5 decades, and if these threats are not reduced quickly, Rwanda will soon lose the species, by raising awareness about the conservation issues and providing a holistic, multi-disciplinary approach to critical conservation issues, according to Nsengimana.

Nsengimana reintroduced 150 cranes within Akagera National Park since 2014. They are rehabilitated and monitored through GPS tags.

“The ultimate goal is to change the Grey Crowned Crane population from declining to increasing,” said Nsengimana.

“I love everything about Nsengimana and his project, along with his impressive track record as a gorilla vet. He’s clearly a very charismatic emerging conservation leader, whose success in unravelling the complex cultural sentiments surrounding crowned cranes has evolved into an excellent home grown rescue effort,” Saba Douglas-Hamilton, chairperson of International Selection Committee in FFN said.

Results of National Exams Out: Here Are the Best Students