Van Gaal’s arrival in the capital Kigali was confirmed to KT Press by an official in Rwanda Development Board (RDB)’s Tourism department.

“Yes, he (Van Gaal) is here as we wait for other cerebrities to arrive ahead of of the Kwita Izina ceremony,” the official who requested not to be named said.

A picture of Van Gaal’s arrival in Rwanda is circulating on Social media.

“Welcome in Rwanda Louis Van Gaal, let us talk Kwita Izina and forget everything about Manchester United,” one Moses Mutabazi jokingly tweeted with a picture of a lady welcoming Van Gaal in one of the facilities in the capital Kigali.

Rwanda Development Board Chief Executive Officer Clare Akamanzi retweeted it – a confirmation that the former Manchester United boss is indeed in the country. 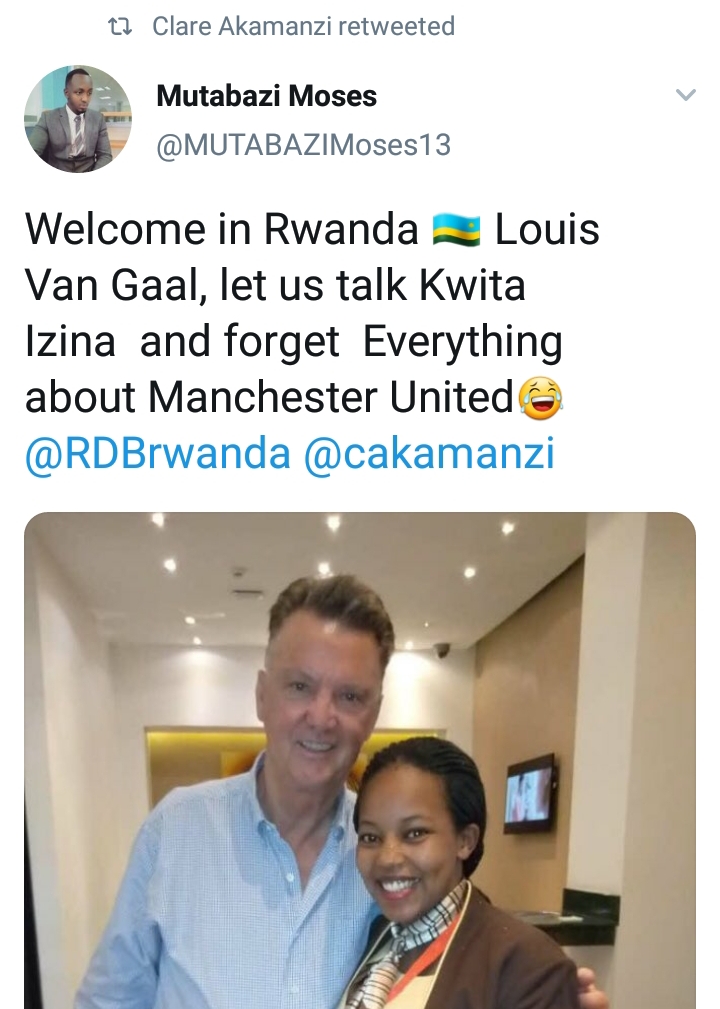 Van Gaal is among the celebrities set to name baby Gorillas during this year’s ceremony. Others include Tony Adams – Arsenal legend.

Since 2005, Kwita Izina has been the country’s biggest event, with several side events organised.

This year’s edition where 26 baby Gorillas will be named, will include Africa Leadership University’s 2nd edition of the Business of Conservation Conference to be held from September 8-9, Akagera’s Rhino Cycling Velo Race which took place on August 24 and a Kwita Izina Mega Concert slated for Sep 7 at Kigali Arena.

Meanwhile, Kwita Izina ceremony, which will take place in Kinigi, at the foothills of Volcanoes National Park in Musanze District, Northern Rwanda, has been building up, with several activities involving communities around national parks already giving a glimpse of what to expect in the coming days.

For instance, last month, RDB handed over 729 cows to vulnerable families living around the Volcanoes National Park as part of its tourism revenue share program.

Government allocated 10 per cent of the revenues from tourism to support communities around the park.

The handover of cows which took place in Nyabihu District, Western Province, is one of 36 projects in which the Government spent Rwf 1.5 billion on during the last fiscal year (2018-2019).

The projects have availed clean drinking water, milk collection centres, health centres, classrooms and housing to members of the communities living around the three national parks of Akagera, Nyungwe and Volcanoes National Park.

The program has existed since 2005 and over Rwf 5.2 billion has been spent on 647 community projects since its inception.