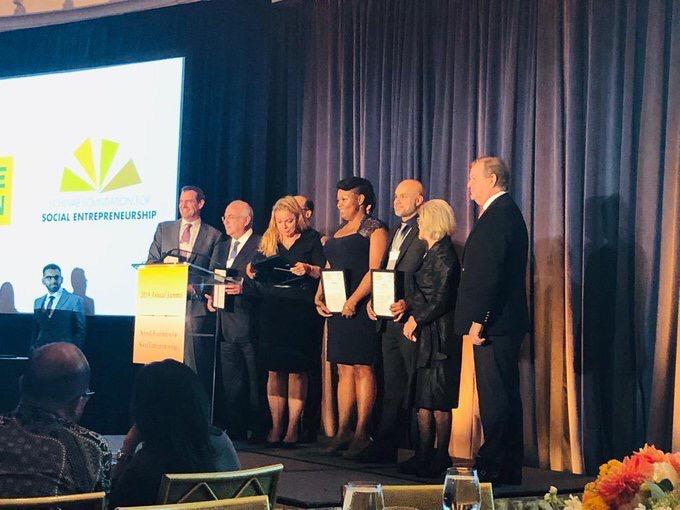 Rwanda’s Africa Improved Foods (AIF) has emerged among the top 40 global awardees of the 2019 Schwab Foundation for Social Entrepreneurship awards.

For more than 20 years, the Schwab Foundation has recognized efforts of heads of social enterprises (CEOs) as a new breed of leaders working towards developing new sustainable models for business, human development and environmental initiatives – reflected in the platforms of the World Economic Forum.

Rwanda’s AIF was awarded in the Corporate Social Intrapreneurs category that recognizes leaders within multinational or regional companies who drive the development of new products, initiatives, services or business models that address societal and environmental challenges.

In this category, Amar Ali, the Chief Executive Officer of Africa Improved Foods (Royal DSM), which has its operations in Rwanda was awarded among seven other corporate companies based in USA, United Kingdom, India, German, with operations in African countries.

The event was held in New York, United States, in which the 40 awardees joined a global network of over 350 outstanding social entrepreneurs from more than 70 countries worldwide.

Just as Rwanda, a few African CEOs managed to get nominated from Kenya (Cellulant), Nigeria (National Social Investment and Welfare Programmes), Sierra Leone (Easy Solar), and Egypt (Nafham) – getting selected in categories of Public Social Intrapreneurs, and Social Entrepreneurs – who solve a social or environmental problem, with a focus on low-income, marginalized or vulnerable populations.

“The 2019 Schwab Foundation awardees represent a new ecosystem of leaders who are driving change and shifting organizations and systems towards a more just, inclusive, sustainable future,” said François Bonnici, Head of the Schwab Foundation for Social Entrepreneurship.

“Not only do they demonstrate alternative models that better serve our society and planet, but they also show that mobilizing and transforming society is possible by instilling innovation into the levers of policy, finance, and research for greater inclusion and sustainability.”

“We see social innovation as an ecosystem of pioneering actors with a common purpose,” he added.

In May 2017, AIF opened its state-of-the-art facility in the city of Kigali, where it produces an annual output of 45,000 tonnes of fortified blended foods, employing over 300 staff and also offers 24,000 Rwandan farmers a stable, sustainable income for a proportion of their harvest.

The factory recently celebrated its first anniversary announcing a capacity to feed two million people and be able to reduce stunting in Rwanda from 38% to 32% by 2020 – bringing hope to tens of thousands of children.

The $60 million AIF investment in Rwanda was also named top of ten local business leaders during the 5th edition of the Rwanda Business Excellence Awards 2017 by Rwanda Development Board.

AIF Rwanda was in 2018 named among the finalists of the 2018 World Changing Ideas Awards (WCIA), in the food category among the 12 companies awarded in areas of health, technology, consumer products, energy, transport and education.

More Government Officials to be Prosecuted Over Mismanagement of Funds

Busy as Bees, Rwanda Delegation at the UNGA Hit the Ground Running