When the global head of the Roman Catholic Church, Pope Francis met President Paul Kagame in March 2017 and acknowledged the church’s failures in the 1994 Genocide against the Tutsi, it was presumed that the Pontiff had ended decades of disagreements that pitted the church against the government.

It took 22 years for the Roman Catholic Church under Pope Francis to finally admit that the church and its members played an active role in the massacres that claimed over one million people.

Before that in November 2016, the government had categorically rejected an apology issued by prelates under the Rwandan Episcopal Conference, terming it as ‘profoundly inadequate’ after the clergy put a disclaimer in the apology stating that the ‘church never sent people to kill others’.

The issue has been a contentious one since 1994, with the church remaining adamant to admit to its involvement. Pope Francis’ intervention however seemed to end the bad blood, ushering in a new era of flourishing relations between the church and government.

Speaking to the Press on Tuesday as the Roman Catholic Church in Rwanda unveiled a programme to celebrate 25 years of preaching unity and reconciliation.

Msgr Antoine Kambanda, the Archbishop of the Roman Catholic Church in Rwanda, said a lot has been achieved in the area of unity and reconciliation over the last 25 years. 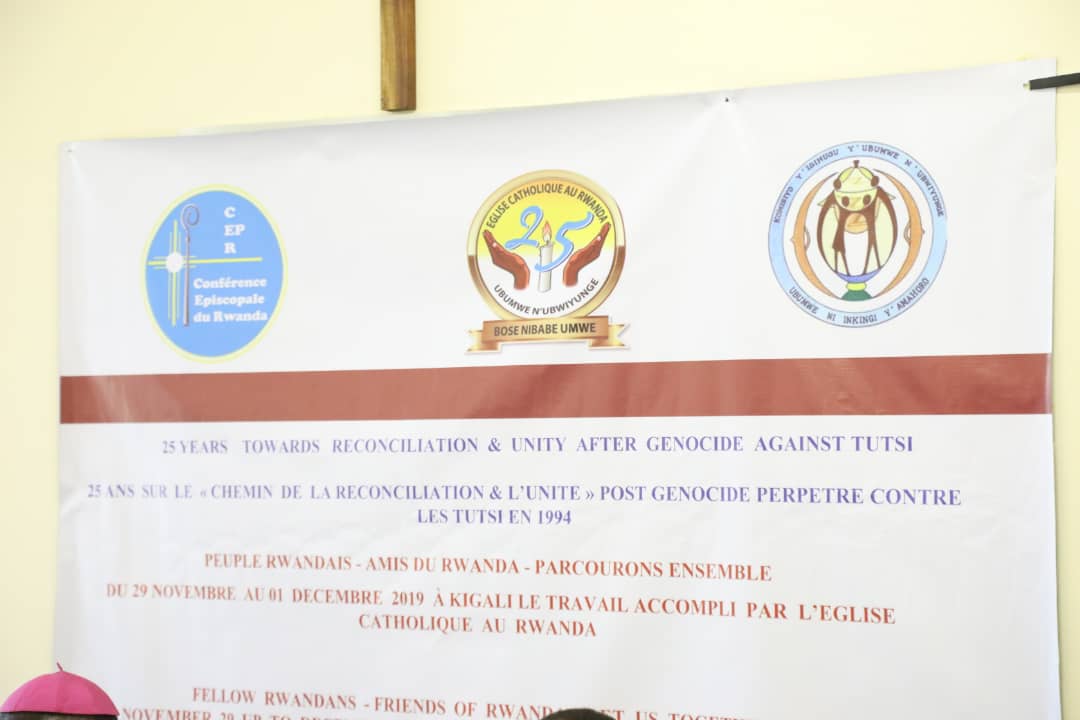 Msgr Kambanda said the church recognises the role of its members and the clergy in the genocide, something he said left pain and scars in the hearts of those who looked up to it for protection, recalling the process that led to Pope Francis issuing an apology.

“The Church like many other institutions in Rwanda was involved in the 1994 Genocide against the Tutsi. It was indeed sad to see church members and some of their leaders participate in the heinous crimes of killing people,” he said, adding however that the Church was the first to make a call to end the killings.

“Understandably this resulted into disagreements with the government, in regard to the role of the church. This is an issue that started way back at the time of Pope John Paul II. He was aware of what was going on in the country, having recently visited the country in 1992,” Kambanda said.

The Archbishop, who also chairs the Episcopal Commission for Justice and Peace (CEPR), said that at the time he was pursuing his studies in Rome and was aware that Pope John Paul II was very concerned by what was going on in Rwanda at the time and was among the first people to raise the alarm that the genocide was unfolding in Rwanda.

“His secretary revealed to us that he would pray every day about the situation in Rwanda and appeal to the international community to act. He was among the first most influential people on the globe to make a call to stop the genocide in Rwanda,” he recalled.

He said that the Pontiff also repeatedly condemned the involvement of catholic believers in the 1994 Genocide against the Tutsi. Thereafter, he said, the church distanced itself from its members who were involved in the killings, indicating that they did so in their own capacity, not on behalf of the church.

This led to contentions with the government which maintained that the church had to own up as a whole to its involvement.

The church however was adamant to do so, insisting that individuals should be held responsible for their actions and maintained a ‘no apology’ stance for the church in general.

It took Pope Francis to clearly articulate the role of the church and its members in the genocide and apologized. Archbishop Kambanda said that the move by Pope Francis cleared the air, setting the relationship between the church and the government on course again.

“The air between the church and government is good at the moment. The government of Rwanda and the Roman Catholic Church as well as other faith-based organisations work hand in hand as partners. When an issue emerges, we sit together and discuss it and find a solution,”

“We have not had a case where the church or a faith based organisation faces off with the government, to the extent of requiring an external solution. We do it amongst ourselves and find a solution to whatever challenges we face,” Ndayisaba said.

He referred to President Kagame’s message last year during the centennial celebrations of the Roman Catholic Priesthood in Rwanda where he said Pope Francis’ leadership marked a new chapter in the relationship between the government and church.

“This chapter of our history is an opportunity for new partnership that serves the people of Rwanda, we have the opportunity to learn from our past and focus on our future with the same end goal in mind: to serve Rwandans,” President Kagame said in October last year.

However, the Roman Catholic Church in Rwanda has been dogged by allegations of not only lacking the will to apologise to Rwandans for its wrongs but also has faced relentless allegations of harbouring ethnic divisions, the genocide ideology and not fully embracing unity and reconciliation initiatives, among other accusations.

Msgr. Kambanda insists there has been commendable progress in the church in regard to uprooting ethnic divisions, preaching unity and reconciliation and restoring harmony and coexistence among Rwandans.

He said the church took up the task, starting right from the families of those who were involved in the genocide, uniting families of victims and killers and ensuring that repentance, forgiveness and intercession are embraced.

“I can say there has been a lot of progress as shown by NURC figures. The results are there for all to see, which is why we want to celebrate these achievements and share with the rest of the world where we have come from and where we are today and consolidate what we have built further,” he said.

The countrywide celebrations will take place from November 29 to December 1. Mr Ndayisaba said that the government remains committed to work with the church to promote unity and reconciliation and also working together on development programmes.

Among other issues, Msgr. Kambanda said the church took off the pulpits all individuals suspected of participating in the genocide, including those who completed their sentences because they no longer have the moral authority to stand before the congregation.

He also said that the church participated and supported government programmes in line with peace and reconciliation as well as delivering justice for the victims. At least 41 per cent of Rwanda’s population are Roman Catholic Church members. 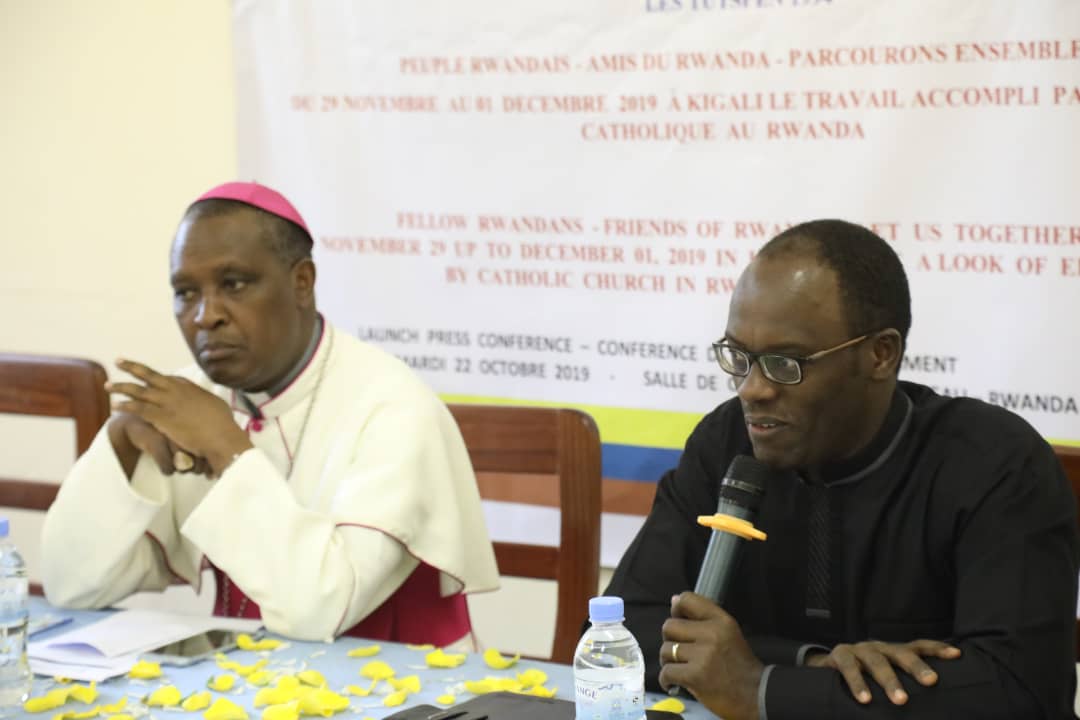 There will be an exhibition showcasing what has been achieved, visits to genocide memorial sites and a national forum on consolidating peace, unity and reconciliation gains.

Analysts maintain that the church still has a lot more to do, 25 years later, in regard to full ownership of the role of the church, revealing more mass graves and excommunicating members of the clergy who were convicted for genocide crimes.