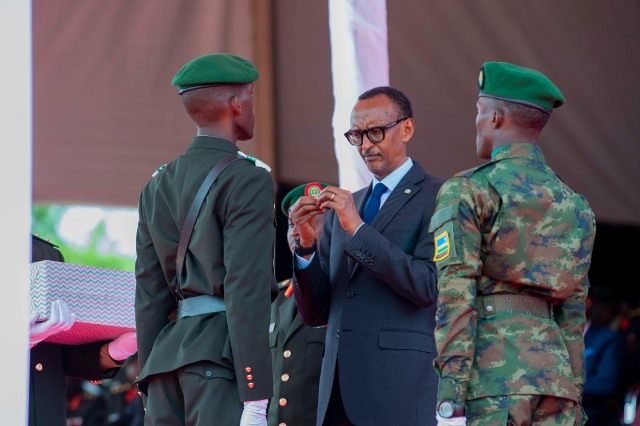 On Saturday morning, all roads led to Rwanda Military Academy in Gako, Bugesera district, where the first cohort of 320 officer cadets who completed the first degree course combined with military training were commissioned in a ceremony which was characterized by military pomp and pageantry. 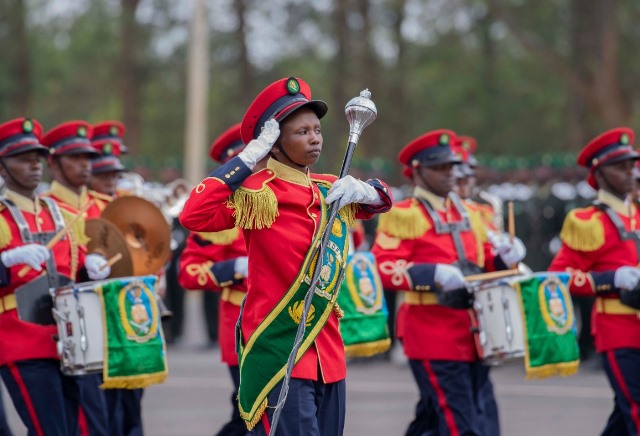 The colourful ceremony was comprised of a military parade by the graduating officer cadets who formed 6 guards while the other two guards were made up of escort military officers. The Rwanda Defence Force (RDF) military band as usual played out the national anthem and other marching songs. 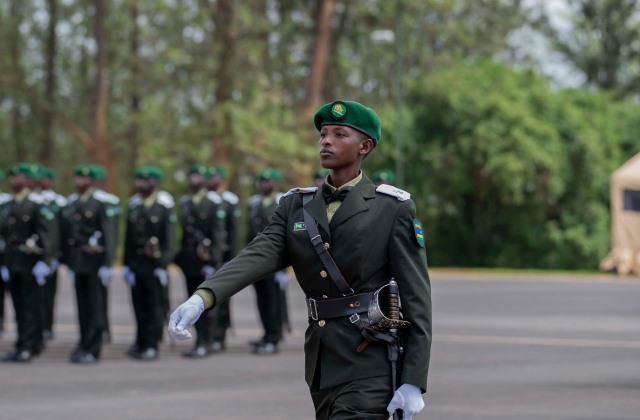 There was no room for error as the parade commander Maj Sam Gahigi and his assistant Capt Judith Kampire commanded their charges to mount a guard of honour typical of highly skilled cadets, whose training is considered to be one of the most intense and rigorous, to prepare them for the task ahead. 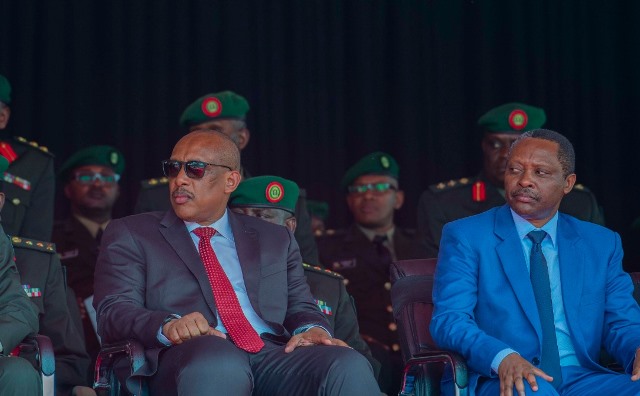 Few moments before the arrival of the guest of honour, RDF military police, in a heavily guarded motorcade, delivered the national flag and the RDF flag to the colour party in one of the spectacles of the afternoon. The coordination and efficiency with which it was done left the audience in awe. 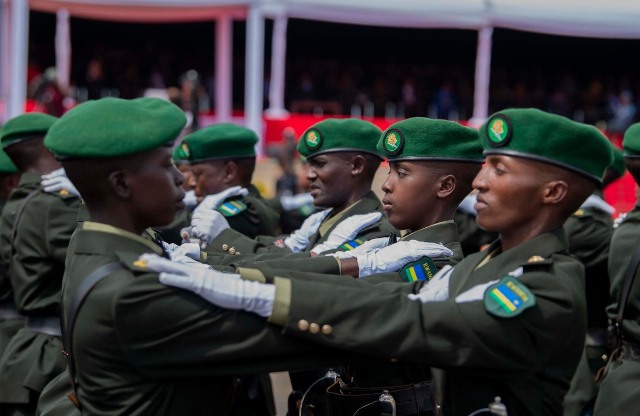 President Paul Kagame, also the Commander in Chief, arrived at a half past 1pm, flanked by the Minister of Defence, Maj Gen Albert Murasira, the Chief of Defence Staff Gen Jean Bosco Kazura and his security advisor Gen. James Kabarebe. 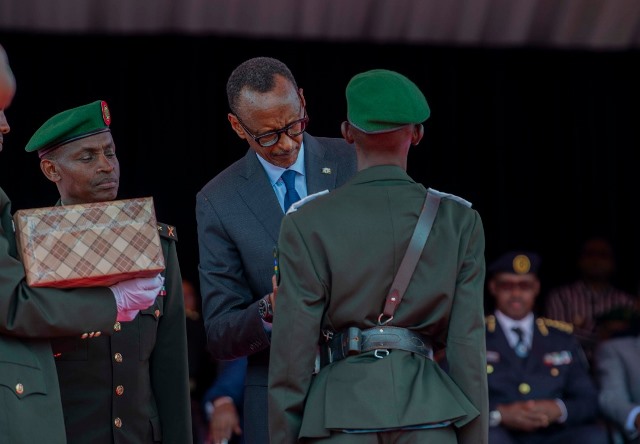 The Head of State inspected a guard of honour before proceeding to officiate at the ceremony to award the graduating cadets with a rank of 2nd Lieutenant. 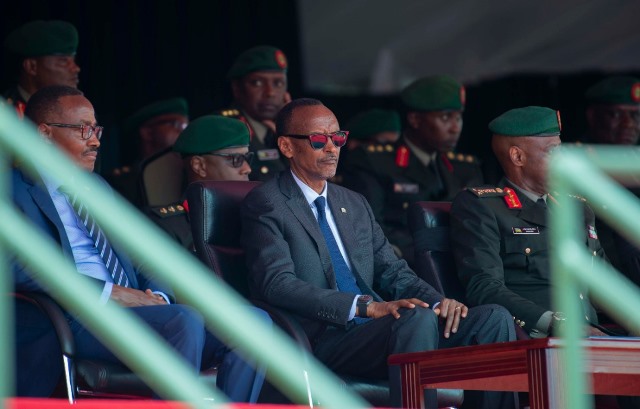 Ululations filled the air mainly from parents and relatives who had travelled from far and wide to see their children graduate from the military academy. 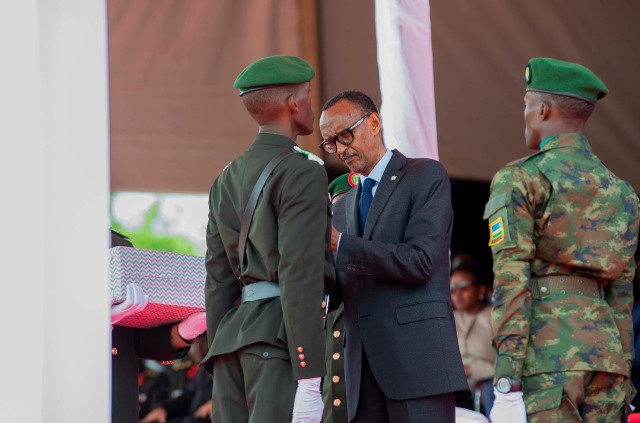 The officer cadets then paired themselves in a sheer display of military allure, each one, using their gloved hands, removing the mock pips form the colleague and replacing them with the real single gold bath star pips that are given to 2nd lieutenants. At the call of the band, the officers reorganise and the ceremony continues. 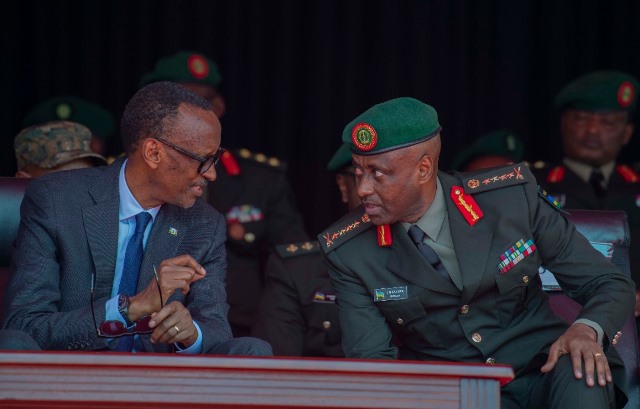 According to Brig Gen Ephrem Rurangwa, the Commandant of RMA, the military institution, which is charged with training officers in RDF principles and leadership skills based on the educational curriculum, the officer cadets are the first cohort out of the partnership with University of Rwanda to offer degree courses to military trainees. 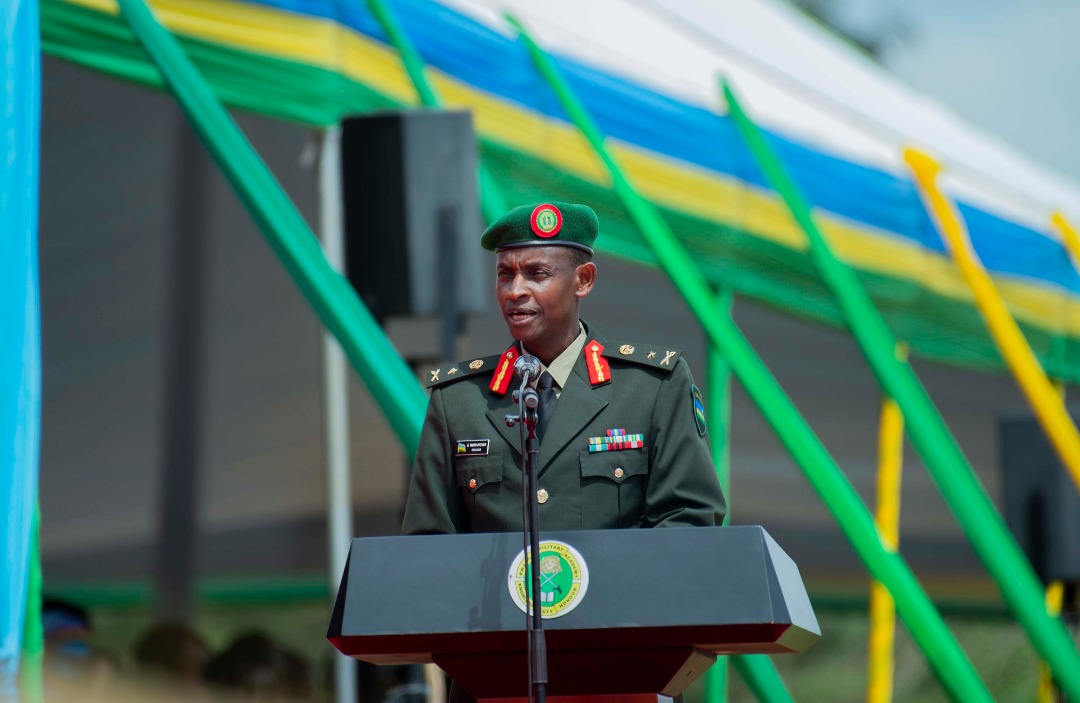 He said the officer cadets, who include 37 who recently graduated from UR but did a one year course in military training as well as the others who did four years, will be deployed in different RDF departments as part of efforts to continue professionalising the army.

“Since 2015, through a partnership with University of Rwanda, which we are grateful for, we started courses where cadet officers complete their training with a bachelor’s degree in the areas of medicine, mechanical engineering and social and military science,”

“Today we have 37 cadet officers who recently graduated from UR. We have a total of 418 students, 141 will graduate next year, out of which, 21 will complete mechanical engineering. In the next year, 2021, a total of 122 will graduate from RMA, with 21 doctors graduating,”

“Specifically on medical doctors, in 2024 we will graduate a total of 95 medical doctors if all goes well and we believe these will greatly contribute towards increasing the number of doctors we have in the country,” Brig Gen Rurangwa said. 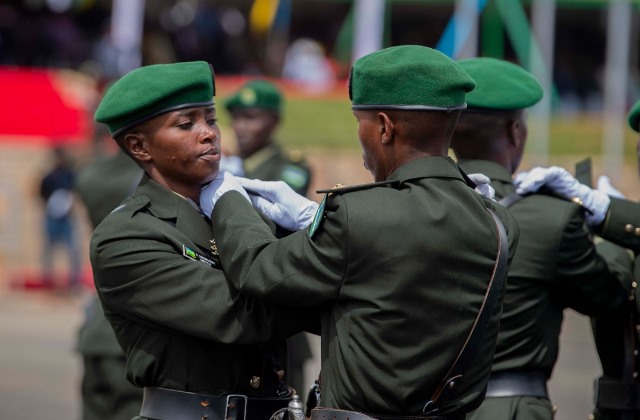 He said that the ones who completed the course were trained in three areas–good conduct, military training and skills as well as university-based education. 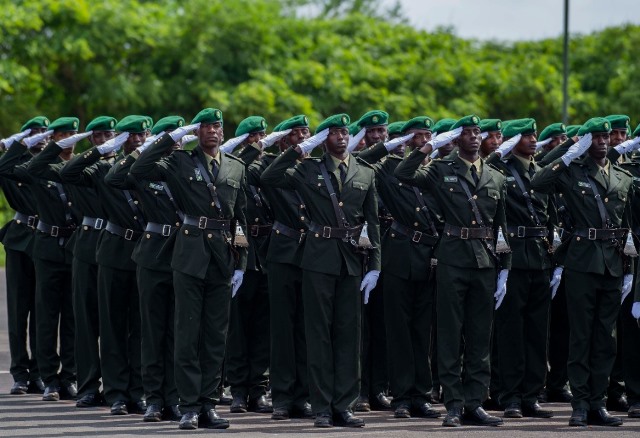 The first category are those who were already graduates and were given 1 year of military training while the other category completed 4 years pursuing a course in social and military sciences. Of the 320 pioneers, 29 are girls. 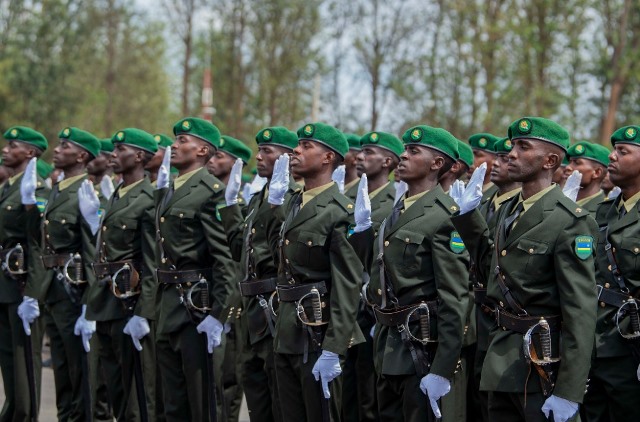 Brig Gen Rurangwa said RMA is looking to upgrade the facilities to make the military education institution a world class facility meeting all the needs of students to excel in their studies and to prepare them for the task ahead. 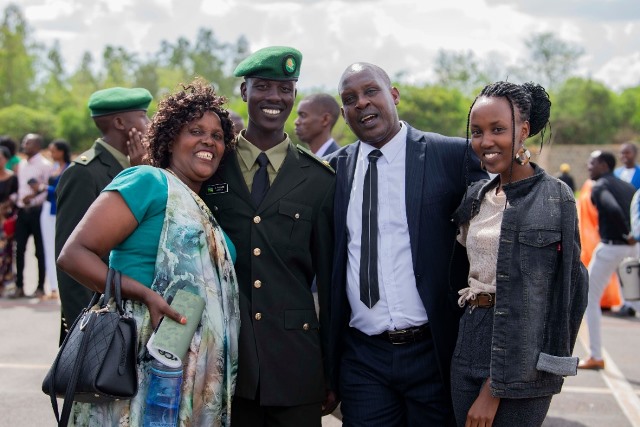 On his part, President Kagame said that both the new four-year course and the one-year course required determination, diligence, discipline in order to complete this course, an achievement he said graduates should be proud of.

“I want to thank all of you for choosing this profession. The profession you have chosen is a noble one. It is one of selflessness and dedication to our country,” he told them. 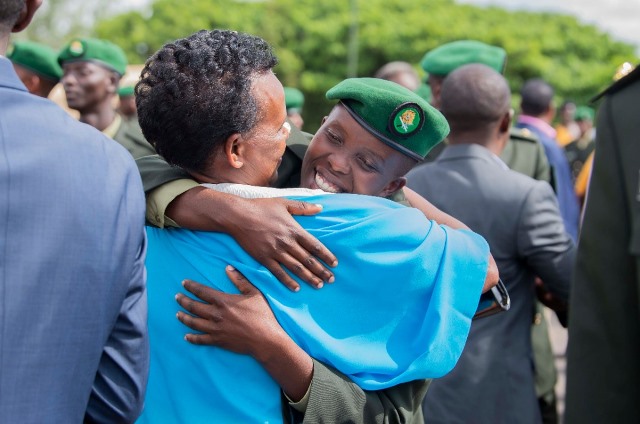 Soon after the ceremonies, it was time for the officer cadets to catch up with their families, after months of gruelling training and sharpening. 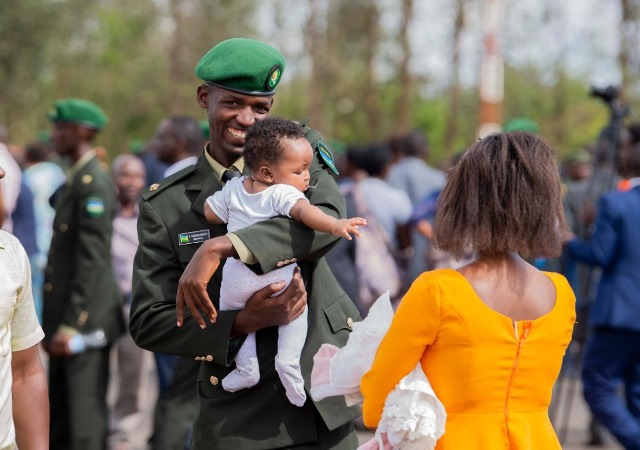 For Emmanuel Nsengiyumva, it was a dream come true but also a beginning of a long journey, doing something he wanted to do as a child. His mother Patricie Mukamukwende embraced him tightly after more than a year without seeing each other.

“I was not surprised when he told me he wanted to join RDF. From childhood, he always displayed high levels of discipline and commitment. He was different from all his siblings,” Mukamukwende said.

“He was always sharp and confident despite being the smallest of his siblings. He always showed pride in whatever he did and is always grateful. I am always proud of him. He used to be the first in class and by 23 he had completed university studies,” she adds as the two hug endlessly. 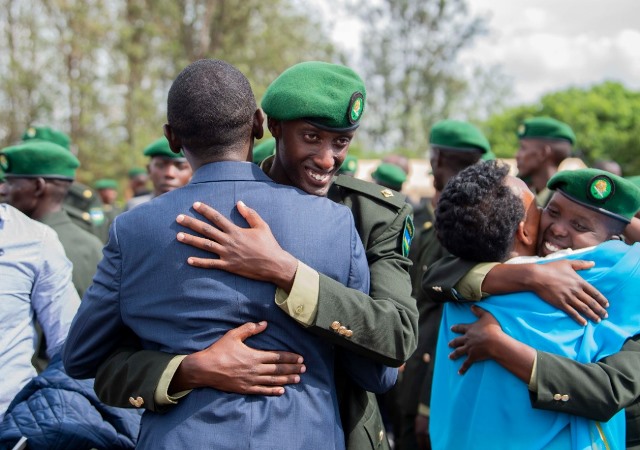 On his part, Nsengiyumva said that he has always wanted to join the army but it doesn’t stop there –serving his country is what drives him.

“I can’t express how I feel right now but I am confident that we have been prepared in the best way to serve the country at different levels. I am ready to do that,” the 25-year old said.

Post ceremony, the passing graduates hugged and caught up with their family members, while some could not control their tears on seeing their loved ones. Ululations and celebrations filled the air while photo ops took the best part of the afternoon.

The graduates were given 15 days of rest before they return for deployment. 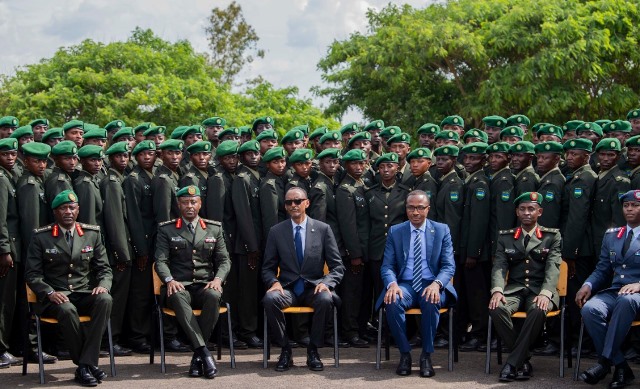 All photos and more here by Plaisir Muzogeye