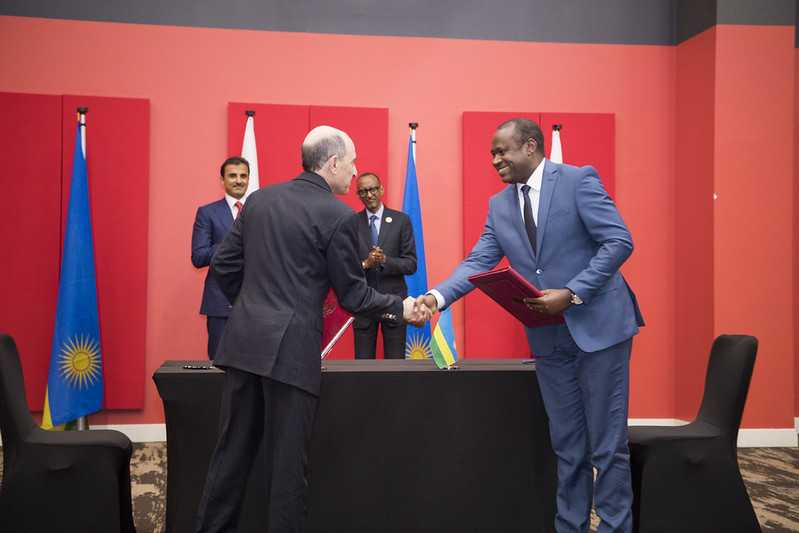 When the Emir of Qatar Sheikh Tamim bin Hamad al-Thani arrived in Rwanda to unveil the anti-corruption sculpture along his host President Paul Kagame at Kigali Convention Centre (KCC) on December 9, everyone’s focus was on this historic event happening in Rwanda.

The day was long, as celebrations filled the winners of the 4th International Anti-Corruption Excellence Award that were announced shortly after President Paul Kagame and the Emir of Qatar unveiled the anti-corruption sculpture.

But little was known that, later after the event, a historic signing was in the making. This is the day Rwanda and Qatar Airways sealed an investment deal for Rwanda’s new international airport in Bugesera district, Eastern Province.

Under the deal signed, Qatar Airways – the state-owned flag carrier of Qatar, agreed to take a 60% stake in the project, which as a whole is valued at around $1.3 billion.

This is perhaps the biggest project Rwanda is executing. According to terms of the agreement, the new investment deal between Qatar and Rwanda to build the airport has three agreements including; to build, own, and operate the state-of-the-art facility.

Addressing journalists shortly after signing the deal, Infrastructure Minister Claver Gatete said that the new airport “is being redesigned to accommodate seven million passengers per year” during its first phase – which is set to be completed and operational by 2022. 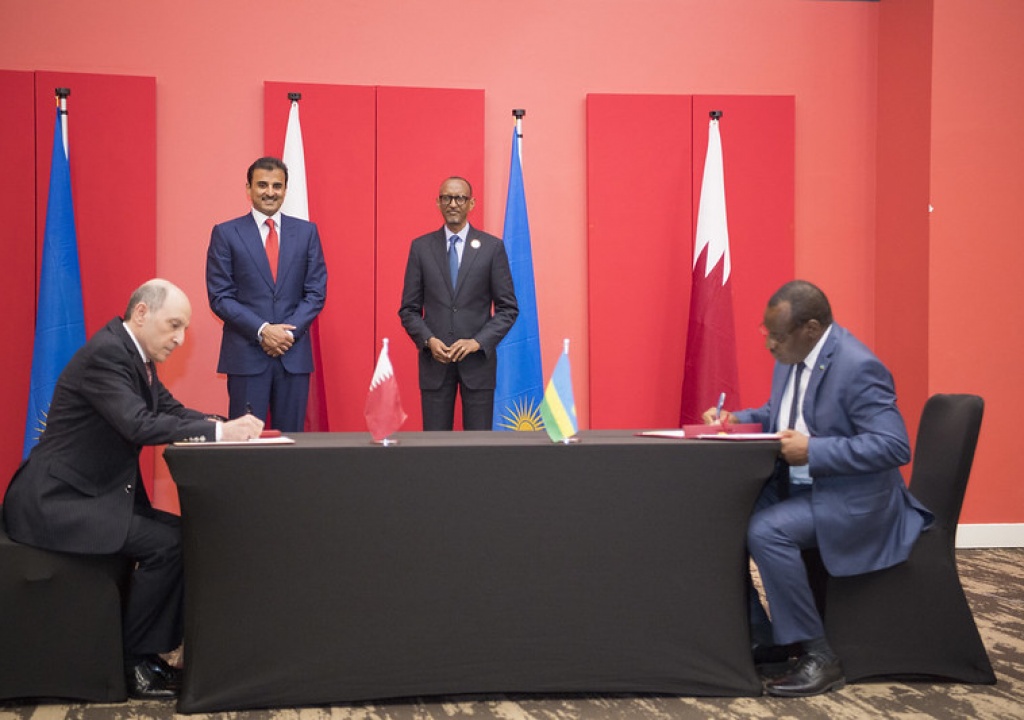 This signing has been the talk of the day – and would probably go on and on.

As 2019 nears its end, KT Press helps you make a recap on some other bigger signings worth over $700 million prior to the international airport deal. These include grants, credit and financing agreements.

The initial funding was worth 146.9 million Euros, taking the entire funding to this program to 261.9 million Euros, with an objective to ensure equitable provision of adequate, reliable and sustainable water and sanitation services for targeted cities. 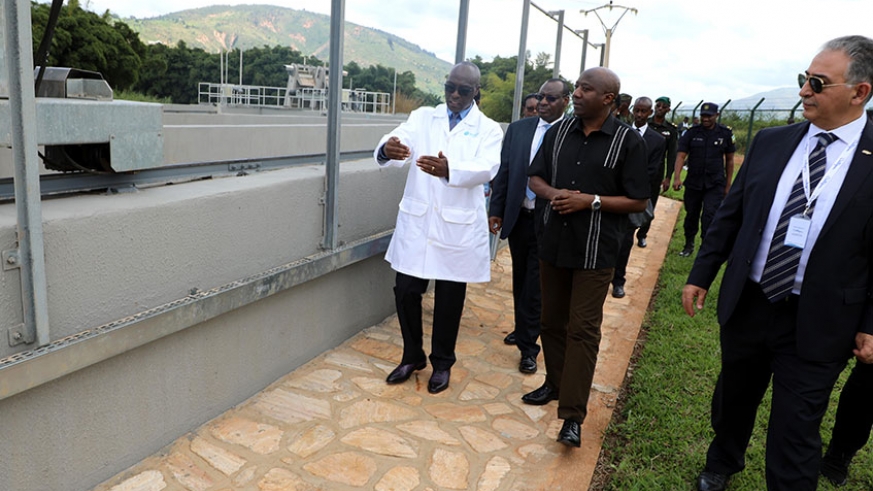 This signing came a week after President Paul Kagame who was on a visit to Japan from January 7-8, joined Prime Minister Shinzo Abe to witness the signing of a bilateral agreement on Nzove-Ntora Water Transmission.

Rwanda’s quest to rollout electricity for all was boosted by the signing between the government and the Arab Bank for Economic Development in Africa (BADEA), on the sidelines of the first 2019 BADEA Board of Directors Meeting in Kigali, a concessional loan agreement worth $20 million (Approximately Rwf19 Billion) to finance rural electrification project in Nyamagabe and Nyaruguru Districts.

The project envisages supply and construction of distribution networks and meters and service cables to connect houses, commercial and public centers in Nyaruguru and Nyamagabe Districts, according to Ministry of Finance and Economic Planning – the caretaker of government finances.

June was yet another good moth for refugees and their host communities when Rwanda and the World Bank signed a $60 million financing agreement (approximately Rwf54 Billion), of which $25 Million is a grant and $35 Million is an International Development Association (IDA) Credit which will be paid on 0.75% interest rate in 38 years including a grace period of 6 years to improve access to basic services and economic opportunities for refugees and host communities, and support environmental management, in the six districts in Rwanda that host refugee camps.

On this same day, the government of Rwanda and World Bank signed an additional financing agreement worth $ 71 million (approximately Rwf 64 billion) for the Transformation of Agriculture Sector Program.

As part of increasing the number of PhD holders and boost research across institutions of higher learning in the country, Rwanda government, Sweden and University of Rwanda signed SEK 330 million (approximately Rwf 31.5 billion) to boost research and use of scientific knowledge.

Under the “University of Rwanda – Sweden Programme for Research, Higher Education and Institutional Advancement”, the grant has been and will support production and use of scientific knowledge of international quality that contributes to Rwanda’s development and enable poor people to improve their quality of life through research carried out at the University.

The Government of Rwanda and the People’s Republic of China signed a grant agreement worth $42.8 million (approximately Rwf38 billion) that will, among others, finance the expansion and rehabilitation of 10km Prince house- Giporoso- Masaka road in the capital Kigali.

According to terms of the grant agreement, both Governments will engage further in consultations to explore other projects for financing.

The expansion and rehabilitation of Prince House-Giporoso-Nyandungu-Masaka will see the road transformed from a two-way two-lane to a two way- four-lane road – a move that will significantly decongest traffic along the road, according to City of Kigali officials.

The biggest part of Rwanda’s budget goes into infrastructure projects. According to the 2019/2020’s Rwf2.8 trillion budget, Infrastructure leads the country’s list of top six expenditure priorities – with a colossal Rwf551, 1 billion ($600 million).

Rwanda’s Judiciary which was recently applauded by President Paul Kagame for having undergone key reforms over the last 15 years, was boosted in June this year. The Government and the Embassy of the Kingdom of the Netherlands signed a financing agreement worth €9.3 million (approximately Rwf9.2 billion) grant to support the sector.

According to the agreement, €5.4 million of the grant will support the Supreme Court and National Public Prosecution Authority to improve specialized legal knowledge and skills for judges and prosecutors and reduce backlog cases in courts.

It will also provide for adequate and easily accessible legal information to judges and prosecutors to help them while analyzing and deciding on cases.

The agreement also included support to the Genocide Fugitive Tracking Unit to support their ongoing work.

Rwanda Correctional Services received €3.9 million which will be used to build 10 vocational training centers in 5 prisons and provide opportunities to prisoners to gain vocational skills and a diploma.

The concessional loan brings the total financing to this project by AfDB to $270 million which is the largest operation made by the Bank in Rwanda.

The main objective of the project is to improve teacher competency and student retention and learning.

The project consists of three main components which include: Enhancing teacher effectiveness for improved student learning; Through improving teachers’ English language proficiency and digital skills, support professional development of math and science teachers in upper primary through lower secondary schools; Reducing overcrowding and distance to schools; as well as financing the construction of 11,000 furnished classrooms and approximately 14,680 latrines, which is 50 percent of the required school infrastructure. The project will also strengthen institutional capacity to support teaching and learning.

In order to cut down biting numbers of stunting among Children, the governments of Rwanda and Japan signed a concessional loan agreement worth $ 90 million (approximately Rwf82 billion) to assist Rwanda’s effort to tackle malnutrition in Rwanda.

The support will be channeled through Japan’s Sector Policy Loan for Nutrition Improvement through Agricultural Transformation.

Rwanda and the World Bank signed a $125 million (approximately Rwf112 billion) credit agreement to enable expansion of electricity services in the country.

The new Rwanda Energy Development Policy Operation (DPO) is the third and last of a $375 million programmatic series, the first of which was approved in December 2017.

Meanwhile, it remains to be seen if Rwanda will sign more deals before December 31, 2019.