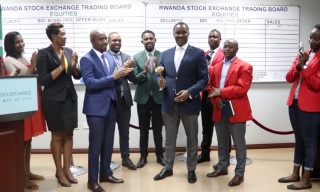 It was a successful and memorable year for Rwanda Stock Exchange (RSE) – the country’s youngest market in the region.

The Stock market, which just opened in 2011, has been growing steadily – despite being surrounded by a small economy with a GDP of less than $10 billion.

At exactly 12 noon Kigali time on Tuesday, December 31, Faustin Byishimo – Division Head of Business Development at I&M Bank Rwanda which is among the 8 listed companies on Rwanda Stock Exchange, rung the bell as the market business for 2019 ended.

Franked by Rwanda Stock Exchange CEO Celestin Rwabukumba and his entire staff, Byishimo immediately dropped the bell before speaking to journalists who attended the closing event.

“As an investor, this was the best choice. To invest on this market means quick returns and safety,” he said.
Shortly after, Rwabukumba took to the stage to outline the market’s performance for the past 8 years – which he termed a “great milestone”.

As the RSE turns 8 years, it has raised $761 million through primary market and $306 million traded on the secondary market.

“It is a very big milestone for a small market like this in a GDP of less than $10 billion. It’s already 10% of the GDP,” Rwabukumba said.

Asked on what has triggered this milestone performance, Rwabukumba responded that: “Well, I think it the need for people who have invested before, people who want to save and companies that want to raise money and government which wants to raise money through the market and the need for the economy to raise long-term finance.” 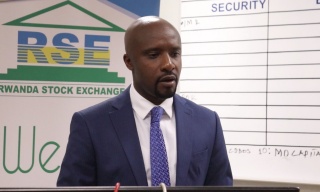 As the year clocks its end, Rwanda Stock Exchange boss told journalists at the closure of the business that within 8 years of its existence, the Rwanda bourse listed 8 companies, 36 debt instruments with a $3.3 million market capitalization.

Bank of Kigali the biggest investor

During the review of Rwanda Stock Exchange performance in the past 8 years, Celestin Rwabukumba said that Bank of Kigali – the country’s biggest financial institution in terms of assets, outpaced other listed companies as the most performing investor.

He, however, admitted that there is still a small margin of Small and Medium Enterprises joining the market.
“It’s worldwide. I don’t it’s particularity for Rwanda.

What happens for the SMEs or retail investors is that they always thing that the Stock Market is for big people. The Stock Market requires a few things that you must be careful about,” he said. 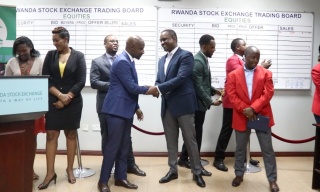 “Most SMEs don’t have good governance. Good governance and accountability are the big issues for companies coming to the market. You need to have good corporate governance, good management system,” he added.

Meanwhile, despite a milestone achievement registered, Rwabukumba said that Rwanda Stock Exchange targets to increase the number of people joining the market every year.

According to Rwabukumba, “Going forward, we want to be the main place for raising money for long-term finance in this country. So that is our objective and we would like to see every household owning an investment product in Rwanda,” 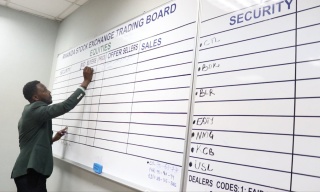 “In the next one year, we want to atleast increase 20% every year of people who are joining the market and because of technology, this can even be 100%,” he said.