Call it “Tour du Rwanda” the famous cycling race that covers almost the entire Rwanda every year. From January 29 to 31, KT Press joined a group of Foreign and local journalists in one of the longest journeys.

The media tour, organized by Rwanda Demobilisation and reintegration Commission (RDRC) was one of a kind and hectic.

The tour involved a road travel that covered Rwanda’s three Provinces; from the City of Kigali to Northern Province – to the Western Province and South, and back to Kigali.

To narrow the scope, the tour started with Kigali Musanze road – Musanze-Nyabihu, Nyabihu-Rubavu and the Kivu belt road that snakes through Rubavu-Rutsiro-Karongi-Nyamasheke and Rusizi districts in Western Province.

And from Rusizi town to Nyarushishi to the thick and constantly foggy Nyungwe forest through Nyamagabe-Huye-Nyanza-Ruhango-Muhanga-Kamonyi and back to Kigali.

In a private bus with a speed governor that never allowed our driver to accelerate past 60 kilometres per hour and a capacity to trim the bus’s speed down to 25 kilometres per hour every time the driver attempted to exceed the set maximum velocity, sometimes people on board went silent.

Others fell asleep, but the meandering roads of this part of Rwanda could not allow one to sleep. The bus kept rolling around different directions as the driver managed sharp corners with roadside landslides due to heavy rains.

It was a journey of nearly 20 hours, with two stops (Musanze and Rusizi). The media tour purposely wanted to give journalists full access to two distant places; Mutobo Reintegration Camp in Musanze district and Nyarushishi Transiti Center in Rusizi district, Western Province.

The two places host former armed militias and their families who were recently captured by Armed Forces of the Democratic Republic of Congo (FRDC) and handed over to Rwandan authorities.

Inside the two camps

Overall, there are 341 members of different armed groups who were captured and handed over to Rwanda and sent to Mutobo camp. These include 273 men and women former fighters. The camp is also home to 66 former child soldiers, 131 adult civilians and 26 children dependents. Among these former fighters include 1 brigadier General, 4 Colonels, 3 Lt Colonels, 2 Majors; 4 Captain, 1 Lieutenant and 9 sous Lieutenants.

Hundreds of kilometers away from Mutobo camp, these former fighters have dependents sheltered at Nyarushishi Transit Center.

The camp, located on top of Nyarushishi hill with a breathtaking view of tea plantations around it, is home to 1991 dependents of the ex-combatants. They include 122 men, 784 women and 1085 children.

Frank Musonera is the Nyarushishi camp manager. During the visit, he detailed to us how, upon arrival, repatriated ex-combatants and their dependents are received and the benefits they get.

“When they are received on the Rwandan side, they are transferred to Nyarushishi Transit Center, all Rwandans dependent of ex-combatants undergo health screening provided with basic needs like food, shelter, medication and clothes,” he said of the dependents.

“They also receive different Non Food Items and other hygienic kits. They get counselled, assisted and guided in resolving personal or psychological problems. This is done during the Pre-Discharge Orientation Program,” he added.

Reintegration in their respective communities

According to Musonera, the dependents of ex-combatants will spend at least 3 months in transit center receiving civic education and introduction to national programs to prepare them re-integrate fully.

“There is also knowing their records to be able to return to their rightful districts, most of them have been away since 1994, and all this time a lot has changed including names of the district of their origin.  Thereafter, they will return to their respective home villages for further reintegration in communities through existing programs,” Musonera told KT Press.

Indeed, these returnees are yet to grasp the new names of their respective districts. Inside the camp, KT Press approached 50-year-old Madeline Nzahoramvuga. Seated on a small mat sunbathing outside her house, Nzahoramvuga does know her home area. “I come from commune Kigombe,” she told KT Press as she massaged her swollen feet. The former Commune Kigombe is in the current Musanze district. She was reminded. Nzahoramvuga’s swollen feet were due to long distance she walked to get to Rwanda.

According to Musonera, “all dependents of ex-combatants undergo civic education courses related to the vision of the government of Rwanda, Unity and Reconciliation, Ndi Umunyarwanda program and get briefed on other development programs initiated to build a sustainable country that we want,”

“This enhances their quick reintegration as they get used to the general situation in different sectors of development in the country,” Musonera told KT Press.

Education of their children

When KT Press arrived at the camp, loud voices of kindergarten kids could be heard. It was class time. Inside one of the tents, more than 50 children sung a song to welcome guests of the day.

Their teacher, Esther Mukamurenzi, started commanding the kids as they embarked on their class sessions. With no trace of an English School or any school in the jungles of DRC, the kids, with jolly smiles on their faces, can count numbers in English up to 50. “They arrived here in a very bad mood. Some wildly behaved. But they improved, just like children. They are quick learners,” Mukamurenzi told KT Press.

Besides assisting Rwandans dependent on ex-combatants in Nyarushishi, the Government, said Musonera, is assessing their levels of education and will be deployed to schools and integrate them in the education system accordingly.

At the camp, malnourished children get daily porridge and milk. Elderly people get it too. Inside the camp, 11 am marks the start of a prolonged lunch. Children are taken in different tents with their mothers for porridge and milk feeding and other meals.

According to Musonera, in case of Genocide perpetrators among repatriated former fighters and their dependents, “Normally all Rwandans dependent of ex-combatants undergo such screening process, when one is identified as suspected, they are handed over to justice to handle. It’s the normal process,” he told KT Press. 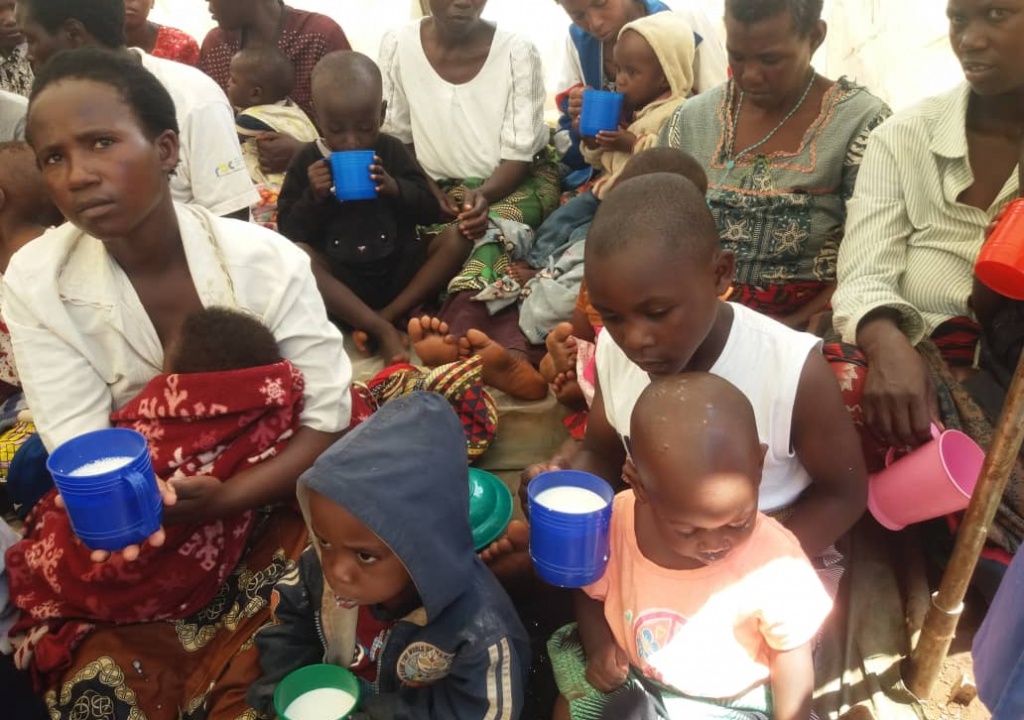 Frank Musonera who oversees Nyarushishi transit center on a daily, says that government does everything possible to ensure the returned are in good conditions considering the situation they have been living in the jungles of the Eastern DRC.

“We have a Health Post in the center. In case we have a serious case they are referred to Gihundwe Hospital; There is also an ECD (Early Childhood Development) facility in the center for kids under 6 years of age. This is to give them the standards that other children get,” he said.

A General with traditional hoe and the two worlds

Back to Mutobo reintegration camp, the tales of the former fighters describe how, after arriving in Rwanda, realized they have lived in two different worlds. KT Press sat down with brig Gen David Mberabahizi – the most senior officer among the former fighters. Thirty-four years ago, Mberabahizi graduated as a Lieutenant from Ecole Superieur Militaire (ESM) in the capital Kigali. He also attended other military trainings in Belgium before fleeing to DRC jungles in 1994.

He worked as a military advisor to the commander of the National Council for Renewal and Democracy or CNRD-Ubwiyunge – a militia group headed by ex-Rwandan Prime Minister Faustin Twagiramungu based in Belgium and Paul Rusesabagina.

The militia group is a breakaway faction of the Forces Démocratiques de Libération du Rwanda (FDLR) – a militia whose members took part in the 1994 genocide against the Tutsi in Rwanda.

“With all the military accolades I received, I regret one thing: Having lived for years carrying a hoe every morning to go and cultivate to get some food. The only thing I owned in DRC jungles was a few pigs,” Gen. Mberabahizi said as he stood with the support of crutches.

“Can I have a seat please?” he asked as he seemingly got tired of standing. Gen Mberabahizi’s miserable life haunts him. “I am turning 57. I have children and a wife, but with nothing to cater for them. As a man, this haunts me every day. I wish I got something to do and look after my family,” a seemingly frustrated Gen Mberabahizi said. 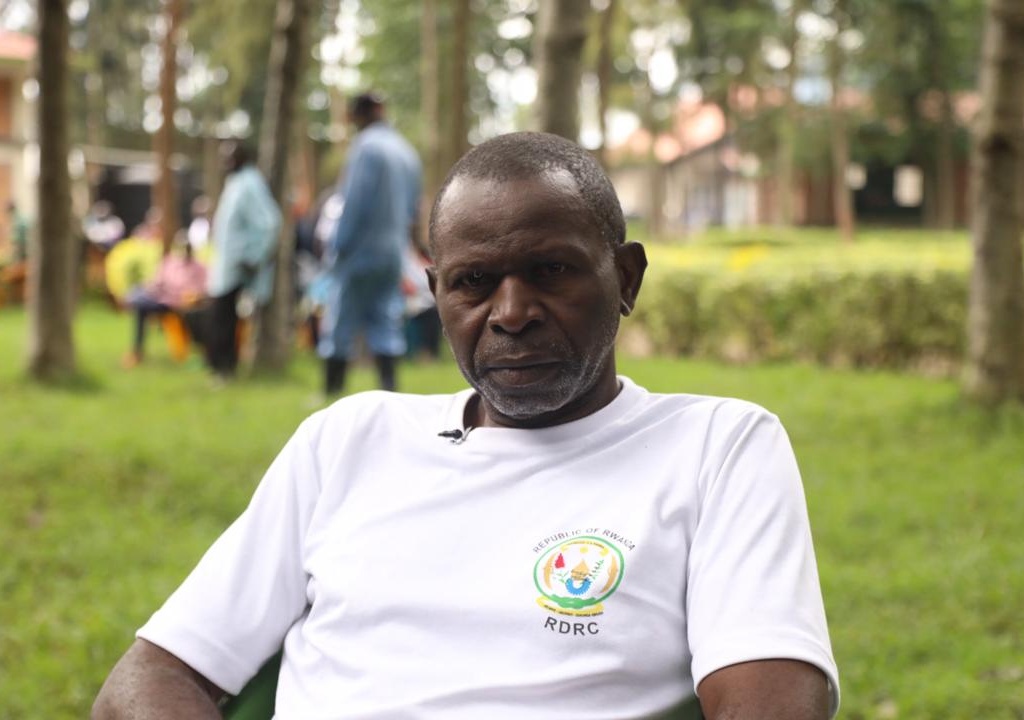 While Gen Mberabahizi’s miserable threatens him, Fred Nyamurangwa – Commissioner at Rwanda Demobilization and Reintegration Commission (RDRC) had good news for him and other ex-combatants.

According to Nyamurangwa, after a three months’ reintegration courses at the camp, Gen Mberabahizi and colleagues will be given cash incentive of Rwf280,000 as stipend for early days of his resettlement.

“At first we give them Rwf60,000 immediately when they leave the camp. We later deposit Rwf120,000 on their accounts and finally more Rwf100,000 is deposited on their bank accounts. We choose to give them this money in installments to help them prepare and plan for income generating projects,” Nyamurangwa told KT Press.

Like many of same status, who are successful businessmen and women around Rwanda, this is just the beginning of an eventful life for Gen Mberabahizi and fellow ex-combatants.

Since 1994, more than 3.5 Million Rwandan refugees repatriated and reintegrated in the society.