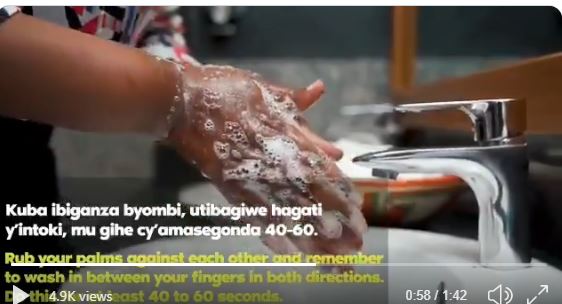 The First Lady Mrs Jeannette Kagame has joined the World Health Organisation (WHO) Safe Hands Challenge aimed at encouraging people to wash their hands as one of the most effective ways to stop the spread of the deadly Novel Coronavirus.

Speaking in French with subtitles in Kinyarwanda and English, Mrs Kagame shared her video going through the hand washing procedures recommended by the UN agency for health, challenging other renowned personalities to undertake the challenge which has since been embrace by global icons.

The First Lady challenged fellow First Ladies of Congo Republic, Kenya, Namibia and Democratic Republic of Congo (DRC) and Princess Dina Mired of Jordan, the President of the Union of International Cancer Control. 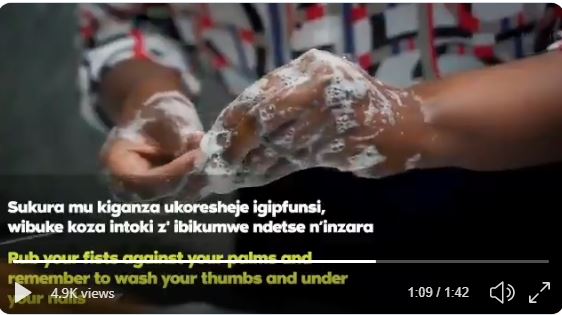 President Kagame was among the first people to respond to the challenge, sharing a video of himself washing hands while explaining the recommended who procedures.

President Kagame, who was challenged by Dr Tedros in turn challenged different individuals, among them his daughter Ange Kagame, who also responded to the challenge on March 17.

I am participating in the @WHO & @DrTedros #SafeHands challenge.

World Health Organisation (WHO) “Safe Hands” challenge which is aimed at encouraging people to wash hands as one of the most effective precautionary ways to keep the New Coronavirus at bay has been embraced by stars including Ivorian Football legend Didier Drogba, Indian actress Priyanka Chopra and many others .

WHO says washing hands using a step-by-step guideline issued by the agency is one of the simple things people can do to protect themselves from #COVID19, including using alcohol-based sanitizers.

Who says washing hands for a period of 40 to 60 seconds is an effective way to control the spread of the New Coronavirus which has so far killed 9, 989 people and infected 241,783.