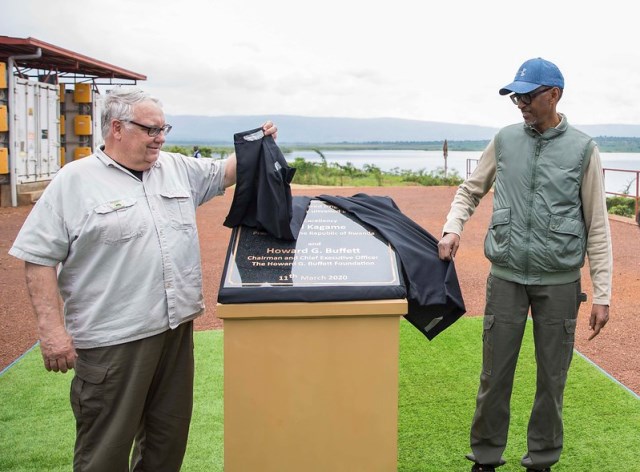 President Paul Kagame and American businessman and philanthropist Howard G. Buffet on Wednesday unveiled a $54m irrigation project that has turned the drought prone part of Kirehe district into a national food basket.

Nasho Irrigation Scheme project, which has been operational since 2017, was established by the Government of Rwanda in partnership with the Howard G. Buffet Foundation (HGBF) to modernize the country’s agriculture sector and specifically improve smallholder farmers’ livelihoods. 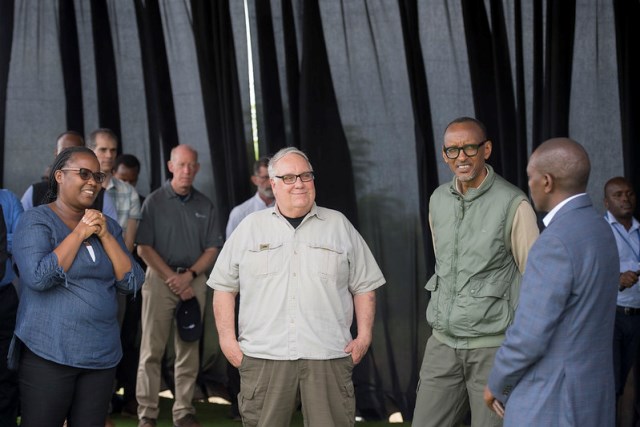 Buffet is CEO and chairman of HGBF.

President Kagame and Buffet officially unveiled the scheme which is made up of 63 centre pivot irrigation systems, irrigating 1,173 hectares belonging to about 2,099 former smallholder farmers grouped under Nasho Irrigation Cooperative (NAICO). 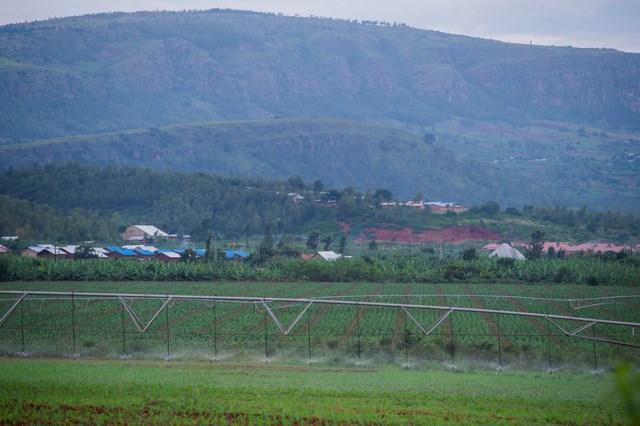 The Head of State hailed Buffet for his continued contribution towards the socio-economic development of Rwanda, describing him as a friend of Rwanda and a personal friend.

“I am very glad that we are witnessing a scheme like this one, which has improved the lives of so many to the level many people could not have achieved in such a short time,”

“Howard, I wanted to thank you for not only your friendship with this country of Rwanda and the people and myself but also for the partnership that has become very productive in this way,” President Kagame said.

Howard has invested over $250m in Rwanda over the last two decades, established the Rwanda Institute of Conservation Agriculture (RICA). At the launch, Buffet made a commitment to build a 36km road linking the institute to the irrigation scheme to create a powerhouse of agriculture research and extension that is not found anywhere in Africa. 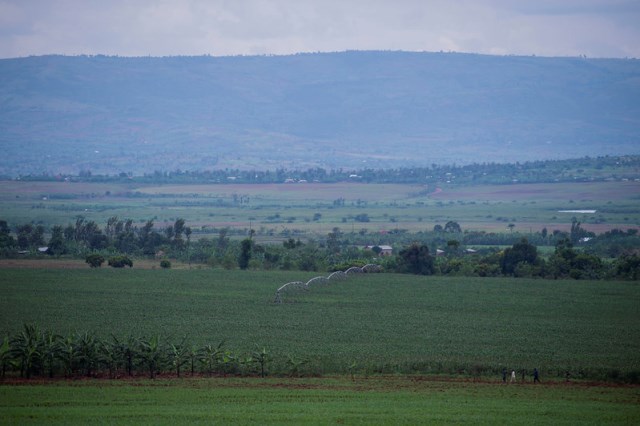 In reference to the project, President Kagame said that agriculture and conservation have come together to make a big difference for so many lives, not just benefiting by receiving hand-outs but receiving best practices, different inputs from the investments that Howard has made.

“I think the reward for you and all those who are doing their best to make this partnership as successful as it has been and continues to be, is seeing bright and happy faces of the thousands of Rwandans,” he told Buffet.

He pointed out that it is satisfying to see Rwandans able to learn to do things and show the benefits in real life as well as the increase in productivity and revenues for farmers. 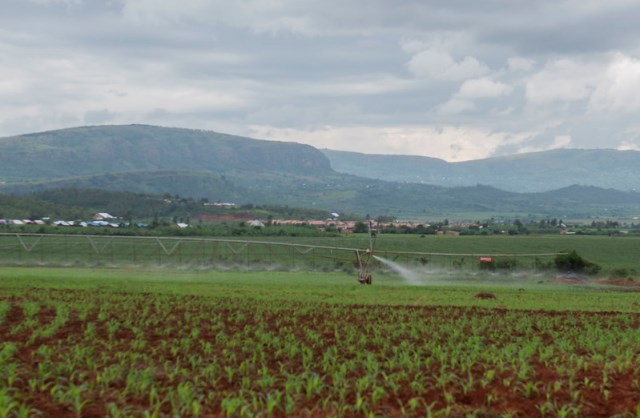 The project has transformed the lives of farmers in the area, who were harvesting 1 tonne on average, but today harvest up to 10 tonnes from the same area of land, thanks to irrigation.

“If you can take it from 3, 4, 5 tonnes per hectare to close to 10, then it is only showing what is possible that everyone can do, and that is the spirit that characterizes what we have been doing or want to do,” he said, adding that the challenge now is to ensure that the productive relationship between Rwanda and Howard never comes to waste at any point.

“The Howard Buffet foundation has been very central in helping us drive this spirit of achievement, success and transformation of the lives of Rwandans and the country as a whole,” thanking the many Rwandans, the farmers and those who have been leading them through these cooperative activities. 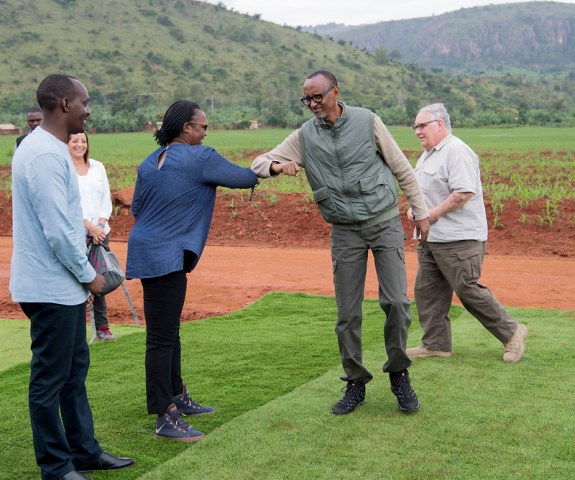 Praising the partnership between Rwanda and the Howard foundation, he said things can only get better and better, pointing out that the scheme has demonstrated what can be achieved through partnerships.

On his part, Buffet said that the progress the project made exceeded his expectations. 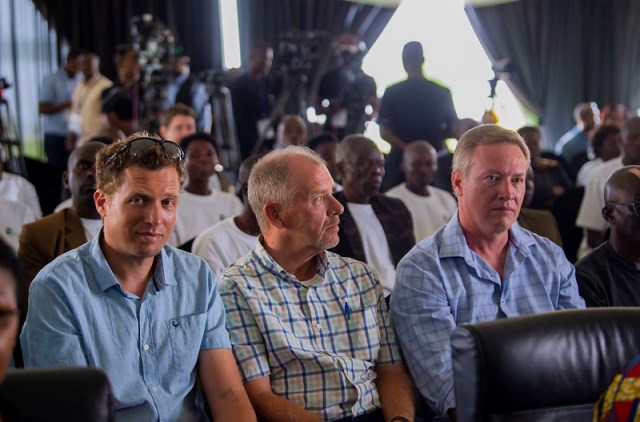 “It has progressed beyond my imagination. I heard today that some farmers are producing more than 10 tonnes a hectare of maize and I am thinking maybe I can learn something from them,”

“I think they are doing much better than I am doing at home. It has been huge progress,” Buffet said, adding that 5 years ago when he sold the idea of introducing centre pivot irrigation to a group of farmers in the same area, they all thought he was mad.

“They had no idea of what I was trying to explain. I got my iPad and I showed them some pictures and they still looked at me like I was little bit crazy. I tried to explain that I am going to bring a system that you can switch on and you have rain,” he said. 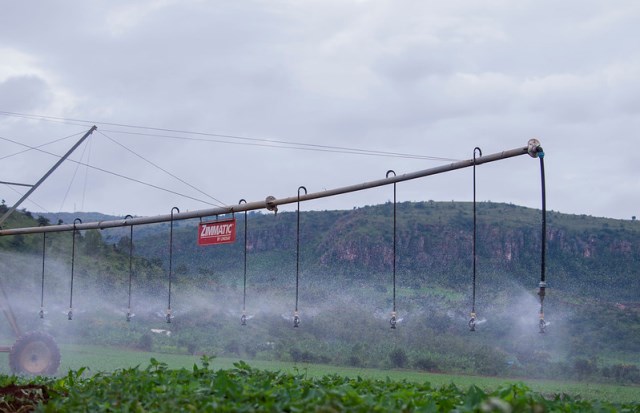 When he said that, he said the farmers thought he was really crazy and then he said he would have to do it and demonstrate to them that it is possible. When he did, they believed it can work and it did work.

He said the biggest challenge was how to get more than 2,000 farmers to agree on the same project but with the support of the government and line institutions, it was made possible. 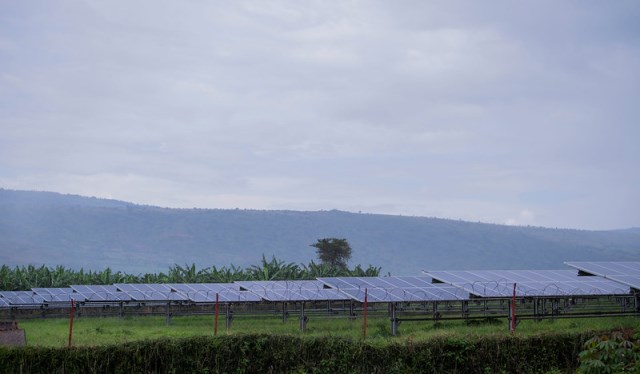 According to the Ministry of Agriculture and Animal Resources (MINAGRI), as of the agriculture season 2020A, maize production at the scheme is between 5.5 metric tonnes/ha and 10 metric tonnes/ha, beans: 1.5 MT/ha, and Soybean: 1.3 MT/ha.

The scheme also consists of a solar power plant with a capacity of 3.3 megawatts to power the irrigation system, with 2.4 MW battery storage unit installed, to provide electricity to pump water and reduce the burden from farmers. 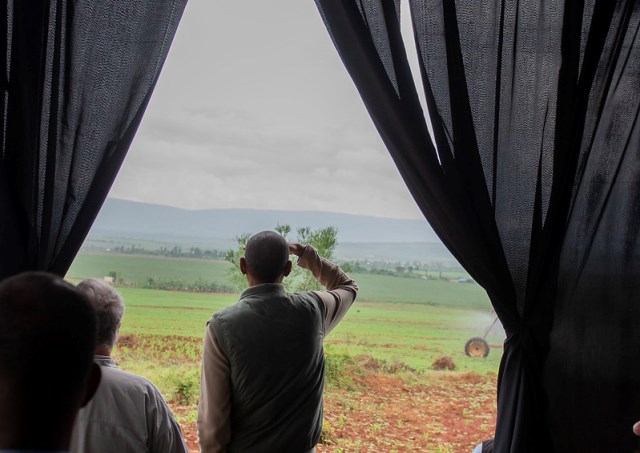 In addition, 144 houses (36 houses that are four-in-one) to resettle households from areas under pivot irrigation, and farm buildings were constructed thanks to this project.

About 24 km of existing roads within the project area were also widened and resurfaced and about 10 km of new roads created, which made it easy for installation of irrigation systems as well as transportation of inputs and produce.