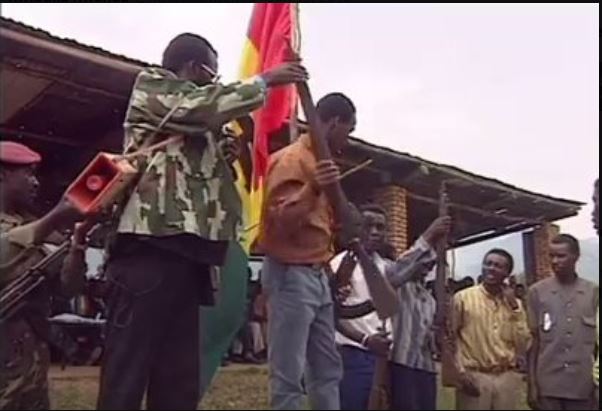 Should a man serving a life sentence for inciting and leading the mass murder of over a million men, women and children be allowed to publish a book in which he attempts to wash his hands of that crime?

“Mr Jean Kambanda, having deliberated and after verifying that your plea of guilty is voluntary, unequivocal and that you clearly understand its terms and consequences. Considering the factual and legal issues contained in the agreement between you and the Office of the Prosecutor and that you have acknowledged that both you and your counsel have signed, the Tribunal finds you guilty on the six counts brought against you…”

Words read out by a judge to Jean Kambanda during his trial at the International Criminal Tribunal for Rwanda (ICTR).

Before they were read out, he was asked whether he clearly understood the plea, what it meant, whether he had entered it freely, without any pressure or coercion. All questions to which he answered in the affirmative.

Kambanda would later seek to change the plea, arguing that it had been based on poor advice from counsel. The judges were not convinced. Kambanda was a clever man who was in control of decisions about his fate.

In 1994, he was also in control of the fate of many lives, and was clear what course he wanted to take then too, that of genocide.

Kambanda was selected to lead the genocidal government from early April, to the defeat of the genocidal forces in July of 1994. He took to the role like a duck to water. He could be seen, brandishing a hand gun, calling for the murder of anyone identified as Tutsi.

He was arrested in the Kenyan capital of Nairobi, in 1977, after years on the run, and transferred to Arusha in Tanzania, where he was tried and sentenced by the ICTR.

The planners and perpetrators of Rwanda’s genocide against Tutsi, whether in 1994 or the earlier murders in 1959, through to 1960s, had long prepared a tactic of how they would deny the crime of genocide.

There will be nothing new in Kambanda’s book, beyond bringing up to date that old tactic to suit the changing times. Genocide denial for the twenty-first century.

For those who wish to comfort themselves with various attempts to rewrite history, Kambanda’s book will find good company on the shelf.

It is, it seems, the season for intensifying the mission to blame the ‘94 genocide against Tutsi, on the Rwanda Patriotic Front (RPF).

Kambanda’s effort will join contributions from journalists Judi Rever, Helen Epstein, academic Alan J Kuperman, and other self styled ‘Rwanda experts.’ Their books, papers, interviews and talks, attempt to exonerate mass murderers, by primarily projecting their crimes on the RPF. Central to all their theses is that the 1994 genocide against Tutsi was “triggered” by the RPF invasion.

Like so many claims designed to demonise the RPF, the direct opposite is almost always the truth.

The RPF was made up of exiled Rwandans who yearned to return to their homeland. Over the years, attempts were made to agree a negotiated return, until it became clear the sectarian, extremist government in Rwanda, would never accede to a peaceful homecoming.

Coupled with this intransigence, were intermittent programmes that continued the Tutsi genocide began in 1959.

By 1990, it had become clear that any return to Rwanda, and eradication of the murderous ideology, would only be achieved by force of arms.

The RPF’s forced return home was to end a genocide, and all that led up to it, by building a new Rwanda. Those who make common cause with the perpetrators of genocide, echoing the tactic of blaming the RPF, always seem to miss a glaring omission in their assertions. If the RPF’s forced return to their country of origin “triggered” a genocide, to what do they attribute the cause of the 1959 massacres?

But, of course, no right thinking human being countenances a justification for genocide, let alone write treatises attempting to do just that.

Dogs bark, fish swim, birds nest in trees, and planners and perpetrators of genocide devise a strategy for genocide denial, even before the first innocent life is tortured and murdered.

It is not surprising that Kambanda would such a book. It is after all what comes naturally to his kind, the kind of human being that would conceive the extermination of other human beings, and go on to put the unthinkable crime into practice.

What is staggering, is that from a prison cell, he is allowed to rub salt into the wounds of the survivors of his crimes. The title alone seems designed to offend in a most sensationalist manner.

Why does the UN, to which the International Residual Mechanism for Criminal Tribunals (IRMCT) answers, allow such an outrage, for outrage it is? 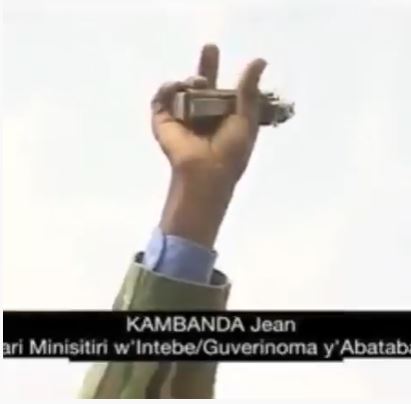 And the publishers, are they, to borrow from Shakespeare knaves or fools? Why do they choose to compound the offence of giving a platform to a convicted mass murderer, by presumably agreeing with him a title that would be certain to offend?

Yet, none of this should come as a surprise either. The Rwanda genocide against Tutsi is the genocide that can be denied with impunity. Its perpetrators roam freely in the world’s most notable capitals, notably, Paris, Brussels, London, while its sympathisers and erstwhile supporters reinvent themselves as human rights activists, and are lauded by the world, which is content to suffer the government that defeated their ideology to be demonised.

Kambanda’s book is just one more in an ever growing number of publications that attempt to rewrite history in favour of Rwanda’s planners and perpetrators of mass murder. Unsurprisingly, they, their sympathisers and supporters are growing ever more emboldened, as either fools or knaves, or both, applaud and even honour them, as champions of humanity.

Emboldened as they were throughout 1994, when the UN Security Council studiously avoidance acknowledging that a genocide was being perpetrated, thereby enabling the murderers to go about committing unimaginable horrors, in the secure knowledge that no one would stay their bloody hands.

No one that is, until the RPF put an end to a genocide that had begun decades earlier, culminating in April 1994.

The RPF victory over the genocidal forces, gave Rwanda, and Rwandans a new beginning. The same RPF that Kambanda is now allowed to attempt to besmirch. “The RPF Interahamwe” screams the title of his book.

It is Kambanda’s second book, and under lax prison conditions, he also entertains major news organisations, to whom he boasts of leading a pleasant existence, and of course, that it wasn’t he who was guilty of crimes of genocide, but the RPF.

A man who led and exhorted some of the most abominably depraved murderers in human history, the Interahamwe, is allowed to project the crime on to a force that defeated him and the mass murderers under his direction.

If this alone did not make the publishers wince, and reconsider, will the UN through the IRMCT, at last step in and end the growing, grotesque spectacle of perpetrators of genocide, and their fellow travellers, thumbing their noses at justice, and the survivors of their crimes. Could, should, Kambanda’s latest outrage be the last straw?