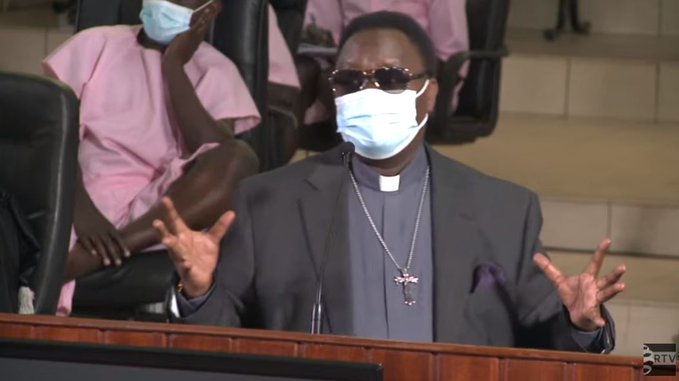 The Prosecution witness in the case involving Hotel Rwanda ‘hero’ Paul Rusesabagina and 20 co-accused has said that Rusesabagina facilitated his own arrest to a great extent.

Bishop Constantin Niyomwungere was heard by the High Court Chamber of International and Cross Border Crimes of Nyanza sitting at the Supreme Court in Kigali after several efforts by the defence to refute the prosecution’s request to have him give his testimony.

Rusesabagina had defended that “that man is a liar. He tricked from the beginning and cannot give any good testimony. By the way, I filed a case against him at East Africa Human Right Court and in Belgium. We shall meet elsewhere, not in this case. Having him, in this case, would be but an embarrassment.”

The prosecution had presented Niyomwungere as a key witness that would explain how Rusesabagina was not kidnapped as he claims.

After the court ruling that any party in the trial has the right to present witnesses, Niyomwungere who speaks Kirundi took the floor and gave a lengthy explanation of how he fitted into Rusesabagina’s own plan to go to Burundi “to meet officials and his fighters”.

Bishop Niyomwungere said that he was familiar and friend of Rusesabagina, and was compelled to accomplish the mission to bring him over after he got in touch with an agent identified as Michel, who showed him the evidence of what Rusesabagina did, which caused a lot of pain to many families and left behind orphans.
Bishop Niyomwungere said that he was touched by the plight of orphans and took it upon himself to execute the mission that would get Rusesabagina to face justice.
“I prayed and I fasted about this mission. I was compelled by the Holy Spirit. I could not be comfortable seeing that I was talking to someone who planned attacks in which people were killed and children orphaned. I was guilty in my heart and I had to do something,” Niyomwungere said in court.
As he was trying to figure out what he would do to have Rusesabagina face justice, the witness said that he heard from Rusesabagina himself say his plan to go to Burundi to meet officials and later his FLN fighters, led by a one Gen. Gervais and he started from there an operation that cost him more than one month.
He said that from the onset, Rusesabagina had expressed fears that traveling with commercial flights would expose him to risks since Rwanda had issued arrest warrants against his name, which is why they agreed to secure a private jet to ferry him to Bujumbura.
“He said he would not do any stopover in any European country because there are arrest warrants issued against him especially in Belgium. He even refused Germany and did not want to go through Kenya where I was. He proposed a stopover at Dubai rather,” said Niyomwungere.
It was agreed that Rusesabagina would pay for a flight from US to Dubai from where a private jet would fly him to Bujumbura. Niyomwungere had lied that the Burundi government had covered all the costs of a private jet for that particular trip.
Niyomwungere preceded Rusesabagina in Dubai and booked a hotel room at Hotel Ibis, but Rusesabagina suspected that “there are many Africans in Dubai and Rwandans may notice my arrival and arrest him.”
Always bowing to Rusesabagina’s wishes, Niyomwungere who was working in close collaboration with one Michel, a Rwanda Investigation Bureau(RIB) worked out of the hotel and headed to the airport of private jets and their travel documents were ready.
Regarding the plane, Bishop Niyomwungere told the court that it is the RIB agent Michel who promised him that they would get him a plane if only he could promise to deliver Rusesabagina. He told them that all he needed was the facilitation and he would get his friend to face Justice.
Back to the airport in Dubai, a migration officer was handed passports of both travellers from the VIP lounge and within a while, they were told that the private jet was ready.
Niyomwungere and Rusesabagina boarded and the former made sure that the latter does not know their destination while on board, and this worked.
On the plane, Bishop Niyomwungere said that they were only 2 passengers -himself and Rusesabagina plus one air hostess and pilots. “Everyone on the plane knew it was going to Kigali, except Mr. Rusesabagina,” he told court.
“Rusesabagina likes discussing and having light moments. Whenever an occasion of getting on-flight information was presented, I would involve him in deep chats and then the occasion would pass without him noticing,” Niyomwungere said.
Halfway, Niyomwungere and Rusesabagina himself slept over until the time they landed at Kigali International airport.
They disembarked and Rusesabagina was arrested.
After Bishop Niyomwungerere testimony, the Prosecution presented precedents in European countries where wanted individuals were ‘tricked’ into ending up in the countries where they were wanted for different crimes, without any force being used, as was the case with Rusesabagina.
Court has set Wednesday, March 10, 2021, at 2pm to deliver a ruling on today’s objections.