Insanity , Duress, Intoxication,…Circumstances that May Lead to Acquittal 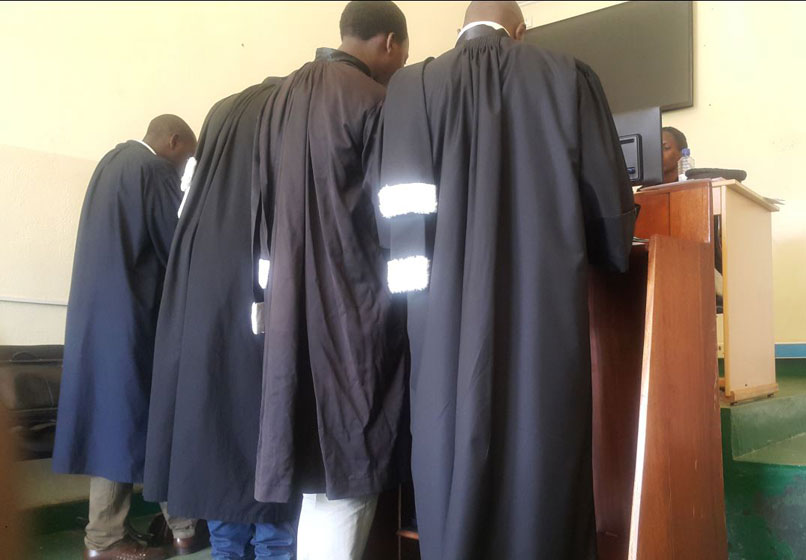 Under Rwandan and International Criminal Laws, a Crime is an unlawful act punishable by law.

However, there are circumstances under which a person who has committed crime is exempted from punishment or enjoys reduction of punishment or acquittal.

The present article explores these circumstances.

The defense of superior order takes into account the fact that a person is in a superior subordinate relationship may be ordered to undertake certain actions which they are expected to obey. the duty to obey however cannot be held to absolve a person for all liabilities when he/she commits a criminal offense. For example, in a war time a soldier can use this defense in a trial before the Court of Law.

According to the Rome Statute, orders to commit genocide or crimes against humanity are manifestly unlawful.

Under Rwandan Law and International criminal Law, a soldier is not a robot he /she must have the reasoning before doing any acts. When you are recommended to go and kill innocent babies, you also have to think as a human and reasonable person.

A person is deemed to act under duress when they are faced with an imminent danger to life, limb or freedom that cannot be otherwise averted, commits an unlawful act to avert the danger away from himself or herself, a relative, or a person close to himself or herself.

In a case of no more choice the obedience to orders defense should be used as a defense when there is a duress. Ex: defense attorney Jovan Babic and Erdemovic in ICTY.

Yugoslavia tribunal: duress can be used in mitigating a sentence but not as a complete defense so, Erdemovic’s sentence was reduced to 5 years.

The ICTY Statute does not include a provision on duress and necessity. However, the jurisprudence of the ICTY has dealt with this matter.

The majority of the ICTY Appeals Chamber has held that duress does not afford a complete defense to a soldier charged with crimes against humanity or war crimes in international law when the taking of innocent lives is involved, but it may be taken into account in mitigation of punishment.

In ICC Statute, Duress can be a complete defense if the act resulted from a threat of Imminent death or serious bodily harm against that person or another person and the person act necessarily and reasonably to avoid this threat, provided that the person does not intend to cause a greater harm than the one sought to be avoided.

Under Rwandan Law, Article 86 of the Law Determining Offences and Penalties in General exempts from punishment a person who commits a crime under force or duress if he/she cannot resist.

A person who follows the orders of someone in authority is also exempted from punishment unless it’s clear that such an act is unlawful.

Exemption from criminal liability also extends to a person who commits a crime as a result of misinterpreting a law or a fact if the misinterpretation removes intention to commit a crime.

Criminal responsibility is excluded when a mentally incompetent person commits a criminal offense.

Insanity defense commonly known   M’Naughton   Rules in many legal systems, in international criminal law was first raised in Nuremberg Court. the Nuremberg Tribunal recognized that mental incapacity can affect criminal responsibility in relation to Rudolf Hess who resorted to the plea of insanity.

Notwithstanding his bizarre behavior during the trial, the tribunal held “there is no suggestion that Hess was not completely sane when the acts charged against him were committed. He was given a life sentence, one of seven Nazis to receive prison sentences at the trial.

Hess died on 17 August 1987, aged 93, in a summer house that had been set up in the prison garden as a reading room. He took an extension cord from one of the lamps, strung it over a window latch, and hanged himself. A short note to his family was found in his pocket, thanking them for all that they had done.

Under the ICC Statute, the defense   is available if.” the person    suffers from a mental disease or defect that destroys that person’s capacity to appreciate the unlawfulness or nature of her or his conduct, or capacity to control his or her conduct to confirm to the requirements of Law”

It means that at the time the crime is committed the person must have the insanity, if they become insane after committing the crime this cannot exempt the person from being held responsible.

Sometimes the law is unfair because when you are charging an insane person, he/she can’t know what is going on and is not able to defend himself in court of law.

Pursuant to the ICTY Precedent of prosecutor v Strugar, the Cambodia tribunal permitted defendant Ieng Thirith to be examined   by psychiatrics to determine if she was fit to stand trial.

The psychiatrics determined that she was suffering from severe dementia and on that basis the tribunal ordered her their unconditional release so she walked away from Justice.

Under Rwandan Law the Insanity defense is admissible when the accused was insane during the commission of the offence.

Another act that results in non-criminal liability, according to article 86 of the Law Determining Offences and Penalties in General in Rwanda is self-defense. This includes fighting off thieves and other wrongdoers, acting in self-defense or defending another person in danger, and fending off any person who breaks into an inhabited place or enters by trickery.

Law Nº68/2018 of 30/08/2018 Determining Offences and Penalties in General also exempts from criminal liability anyone who acts to protect property from damage.

Under the Rome Statute, defense of yourself, another person, or property can be grounds for excluding criminal liability. There must be a threat of an “imminent and unlawful use of force”.

The accused must have acted reasonably and proportionately to the threat. Defense of property can only be raised as a defense to a war crime, and only with regards to property that is essential for the survival of the accused or another person, or for accomplishing a military mission.

However, an act is only considered as self-defense if the means used are proportional to the gravity of the threat. For example, if a person is under the threat of being slapped and they respond by firing a gunshot, this might be considered an extreme measure.

An alibi (from the Latin, alibi, meaning “somewhere else”, “at another place “) is a statement by a person, who is a possible perpetrator of a crime, of where they were at the time a particular offence was committed, which is somewhere other than where the crime took place.

An alibi defense is a defense based on information that a defendant was not at the scene of the crime when the crime occurred, that he was somewhere else and could not be the person who committed the crime. The defense can have witnesses testify and present evidence at trial to support an alibi defense.

If a defendant raises an alibi, he is denying that he was in a position to commit the crime. By raising that issue, the defendant requires the prosecution to eliminate the reasonable possibility that the alibi is true.

A successful alibi does not require conclusive proof of an accused’s whereabouts. There is no requirement that an alibi excludes the possibility that the accused committed a crime; the alibi need only raise reasonable doubt that the accused was in a position to commit the crime.

Where an alibi is properly raised, the prosecution must establish that, despite the alibi, the facts alleged are nevertheless true.

ICC recognizes alibi as a defense, although it is not included in the Rome Statute.

Under Rule 67 of the ICTY and Rule 79 of the ICC the defense must inform the prosecution whether there is an alibi and disclose information about the alibi.

Mistake of facts is recognized as an excuse to the commission of criminal offense in most jurisdictions, it negates a person’s intention to commit a criminal offense and therefore it is deemed to be an excuse.

This idea is expressly recognized in the formulation of “mistake of fact” under the Rome Statute of the International Criminal Court, Article 32(1). In most systems, the law holds that the mistake of fact must be an “honest” mistake as to circumstances that justify the conduct, were they to exist.

Domestic courts generally Judge the Validity on the mistaken belief on objective grounds.

Mistake of fact therefore cannot apply to offenses that may be committed negligently, as negligent conduct does not involve any element of cognition or awareness on the part of the perpetrator: the perpetrator cannot be mistaken about a fact, as he or she never considered it in the first place.

Legal systems differ about whether a mistake of law constitutes a defense to the commission of a criminal offense. Some systems, based on public policy grounds, abide by the maxim “ignorance of the law is no defense.”

In other systems, a mistake of law is a permissible defense in certain circumstances, for example, where the mistake was unavoidable, or where the person who committed the criminal offense can prove that he or she had a justification for the mistake of law.

In Rwanda according to article 86 of Law Nº68/2018 of 30/08/2018 Determining Offences and Penalties in General a person commits an offence as a result of an error of law or an error of fact if such an error entirely removes the intention to commit an offence.

Under the ICC Statute, the defense   is available if “A person is in the state of intoxication that destroys that person’s capacity to appreciate the unlawfulness or nature of her or his conduct, or capacity to control his or her conduct to confirm to the requirements of Law, unless the person has become voluntarily intoxicated under such circumstances that the person knew or disregarded the risk, that as a result of the intoxication, he or she was likely to engage in conduct constituting a crime within the Jurisdiction of the Court.”

This requires the medical certificate to prove it.

Intoxication of the perpetrator of a criminal offense means that he or she is not considered morally blameworthy due to a lack of capacity, and therefore the person can   benefit from the defense set out by International criminal law. The wording of Paragraph 1 is taken from Article 31(1)(a) of the Rome Statute of the International Criminal Court.

In the case of voluntary intoxication, a person cannot avail of the defense of intoxication where he or she knew or disregarded a risk that, by reason of taking the intoxicant, he or she was likely to engage in criminal behavior. The typical case would be a person drinking alcohol to gain the courage to subsequently perpetrate a criminal offense.

For example, if someone abuses alcohol or drugs and as a result they commit a crime, they have to face punishment.

The law says that “A person who deliberately deprives himself/herself of mental faculties during the commission of an offence is criminally liable, even if such deprivation was not intended to commit an offence “

In addition, children under the age of 14 are exempted from criminal liability under article 85 of the Law Determining Offences and Penalties in General.

Article 87 of the Law Nº68/2018 of 30/08/2018 Determining Offences and Penalties in General determines the way non-criminal liability applies.

It says that exemption does not apply to co-offenders and accomplices. Additionally, article 87 says that non-criminal liability does not always result in non-civil liability.

Civil liability, according to the Law Dictionary, is “the legal responsibility of paying money for damage to another person’s health, business or property.” For example, a child below 14 may not be imprisoned for damaging property but his/her parents may be required to pay for repairs.