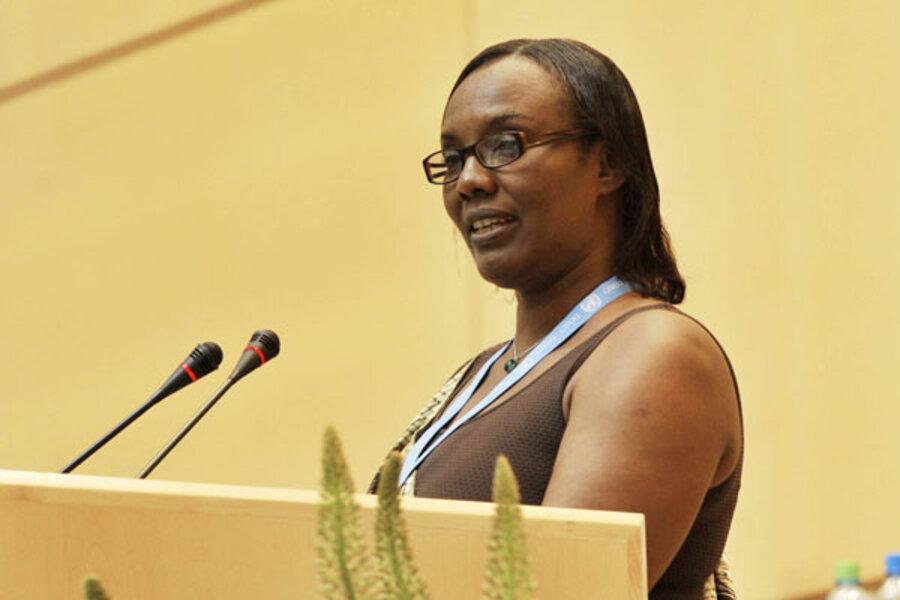 Fifty-nine years ago, a baby girl was born in a family of sixteen children in former Masango Commune, current Ruhango District – Southern Province in an era when polygamy was common trend.

Parents called her Rose Mukantabana. She grew up in a climate of gender based violence where a woman was neglected and her education, right to property not a priority.

Not going to school or even dropping out of school in the middle of lower Primary had been given a “justification” for both genders but most especially for women.

“Do you study to become a village chief, a burgomaster or lawmaker? was a question they always asked a child girl who wanted to persevere in the challenging education during my time,” recalls Rose Mukantabana who defied the odds by becoming Rwanda’s first female speaker of Parliament 2008-2013 . “Indeed, in my time there were no women in leadership positions from local to central level.”

Mukantabana studied her Primary school in four schools after her family relocated to Murama commune, now Nyanza district. She started from her Nyagisozi village which only had Primary one and two at 3 kilometers away from home. 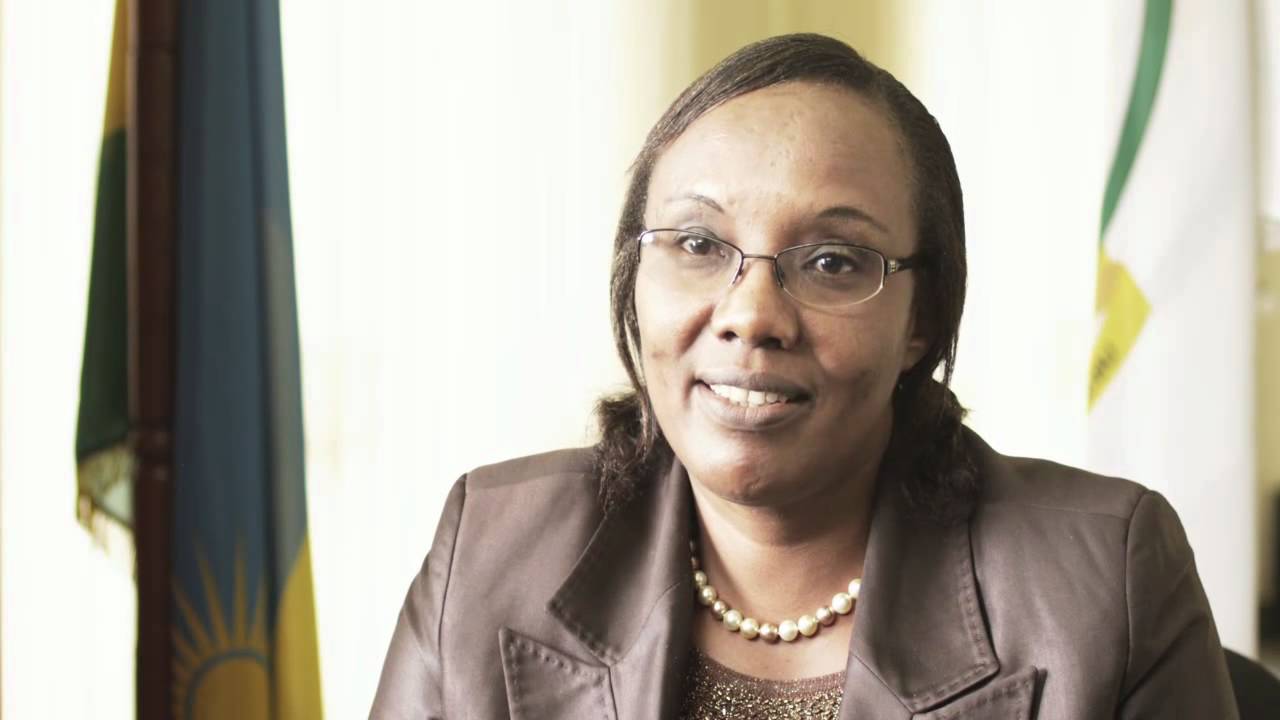 That was her routine six days of every week of academic calendar but all her siblings dropped out of school by Primary 3 while saying there was no motivation to suffer for that much.

Parents were always happy to see their children home because there were a lot of work; grazing cows, farming and many more in the predominantly farming community.

But for Mukantabana, she persevered and finished Primary 4 with first score of her class despite all odds. 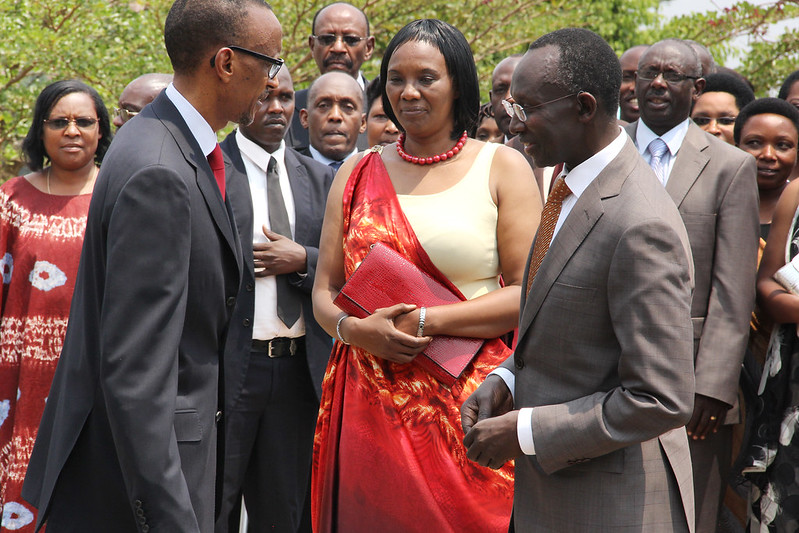 After Primary 4, she was lucky to get a new school – Kabere Primary school in the current Kabagari sector, Ruhango district which is at 4 kilometers from home. Changing school was a good move because her male classmates had started targeting her.

“My male classmates had sworn that they would beat me at the end of the year for being the first of my class,” Mukantabana recalls.

“The proclamation day, my father escorted me to school and realized how painful this trip was. He found me a school at shorter distance as a reward for being best student.”

Mukantabana studied Primary 5 and 6 at her new school and she was relieved because the distance was relatively shorter.

Like her classmates, she enrolled for Primary Leaving Examination (PLE), but, little did she know that a cow would mess up. 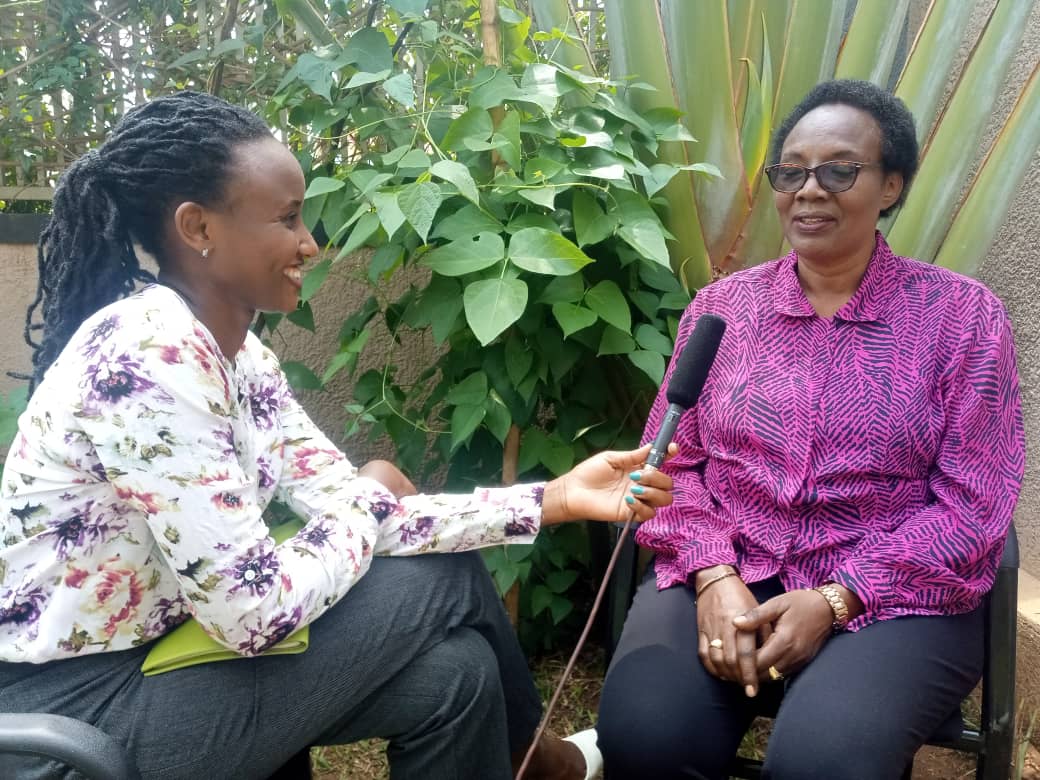 In 1973 on eve of national exams which she had to write from GS Karambi, Mukantabana collected her academic ID known in French as Fiche Signalitique. The ID included all contacts and identification details of a student, including ethnicity which was the basis of allocating places to the students-the quota system.

While returning home, she saw her sister who was grazing cows and passed by. She put down her ID and a cow dealt with it.

“As we were sharing food provision that I had not finished from school, I realized the cow was eating my ID. I screamed and cow keepers tried to save it, but it was too late,” said Mukantabana.

After reflecting on what to do, Mukantabana returned to school to request for another ID, only to be told that it was not possible because the IDs were coming from the Ministry of education, well sealed, without a single duplicate.

“My teacher advised me to find out from the Burgomaster if I could obtain any help, but the burgomaster told me he could not do anything about it,” Mukantabana said.

However, the official advised her to go to the examination site the following morning to see whether the inspector of education of Masango and Murama who was at the site could help.

“I woke up early morning accompanied by mother. I presented my case to the school inspector who was with supervisors from Ministry of education. They told me that it was not possible to sit the exam without the document,” she recalls. 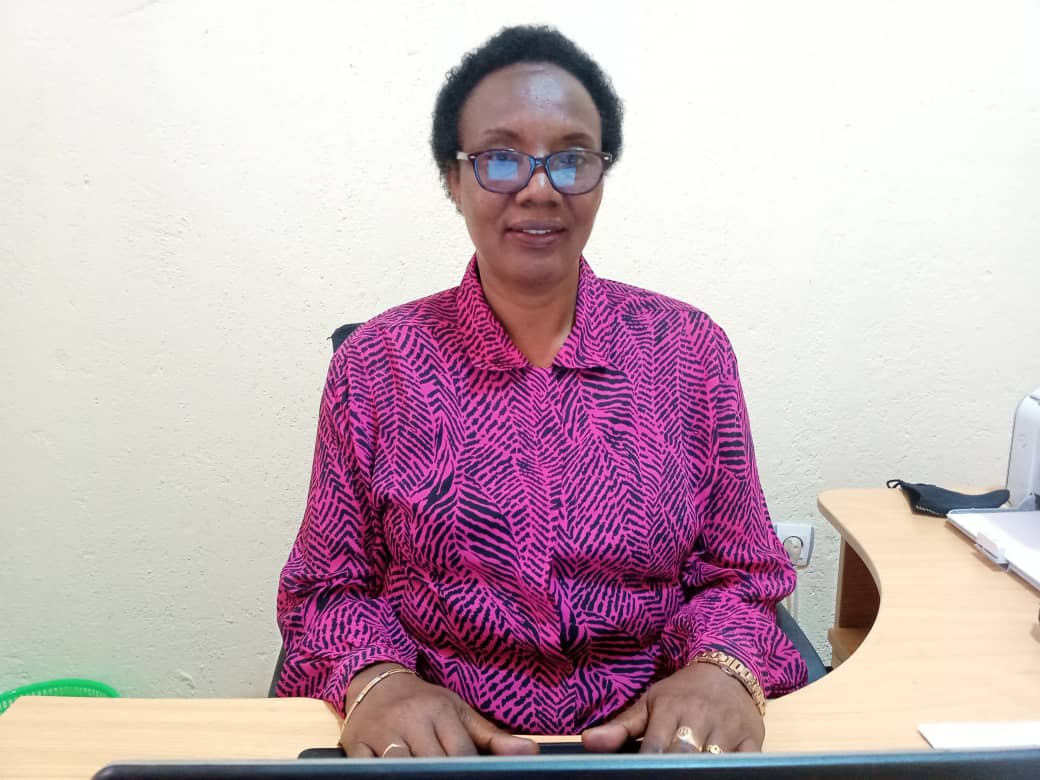 The only promise they made, was to file a report which would allow her to repeat Primary Six and sit the exam the following year, and this was honored.

“When I recall that there were no phones that time! The burgomaster would have called and the issue could probably be settled,” she said.

In 1974, Mukantabana wrote PLE and passed successfully. She was admitted at Nyanza Girls’ school in lower level, then Rwaza in Upper level in Teacher Training College.

At Secondary 5, students had two choices: to proceed with Teacher Training or to change to Secretariat.

She joined Secretariat, completed in 1981 and married a longtime friend Athanase Muyango the following year in Kigali where she had obtained a job after secondary school.

Mukantabana concentrated on her family and work. Despite being bright, she put on hold education because the only high learning institution was the National University of Rwanda which was not open to everyone on merit. 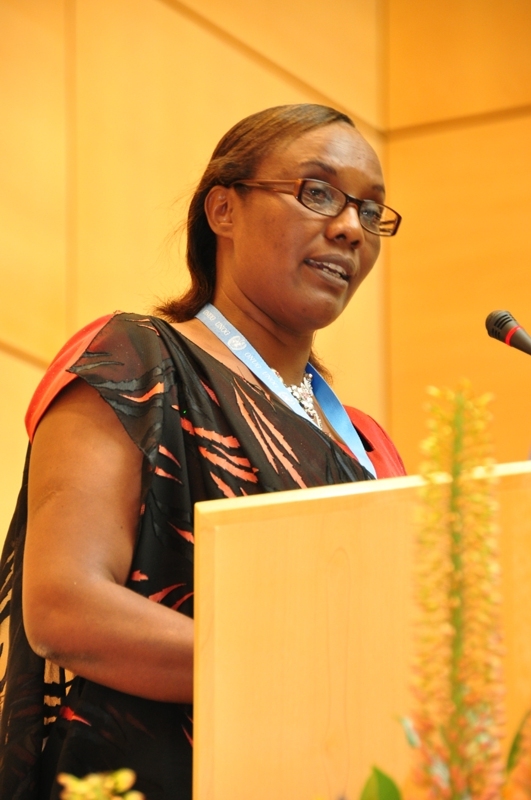 When the then Minister of Education Agathe Uwiringiyimana loosened on University access Mukantabana applied for scholarship to study Law and she was admitted at Mburabuturo campus-Kigali, the plot which hosts the College of Business today.

She stopped in 1994 during the Genocide against Tutsi and resumed in 1995 but was halfway when her husband died in 1996. This loss obliged her to stop again to cater for her children.

Since 1996, Mukantabana is officially a women’s activist. That year, she was employed by Haguruka, a civil society organization which defends the right of children and women until she returned to complete her Bachelor level.

Haguruka would bring her back to serve as Executive Secretary after graduation given her passion to defend women’s rights.

However, defending the cause of a woman, gender balance has been part of Mukantabana’s life since childhood. Her late mother was the first beneficiary of this activism.

Mukantabana is a witness of gender based, domestic violence since childhood in her own family and village.

While she was in Primary 4, Mukantabana was saddened by a decision of her father to marry a second wife, then a third one. But this came after years of her mother’s suffering.

“He had a habit of beating my mother, something we never understood,” she said.

“We were three girls born from my mother. He prevented all of us from having any right to property and we became a miserable family.”

Mukantabana recalls that the family had a huge banana plantation and many farms and cows.

“Father prevented us from getting banana for food. He refused us firewood from our forest and went further to stop cow keepers from giving us milk,” Mukantabana said.

“We could go hungry sometimes until concerned neighbors told my mother to always come for food.” 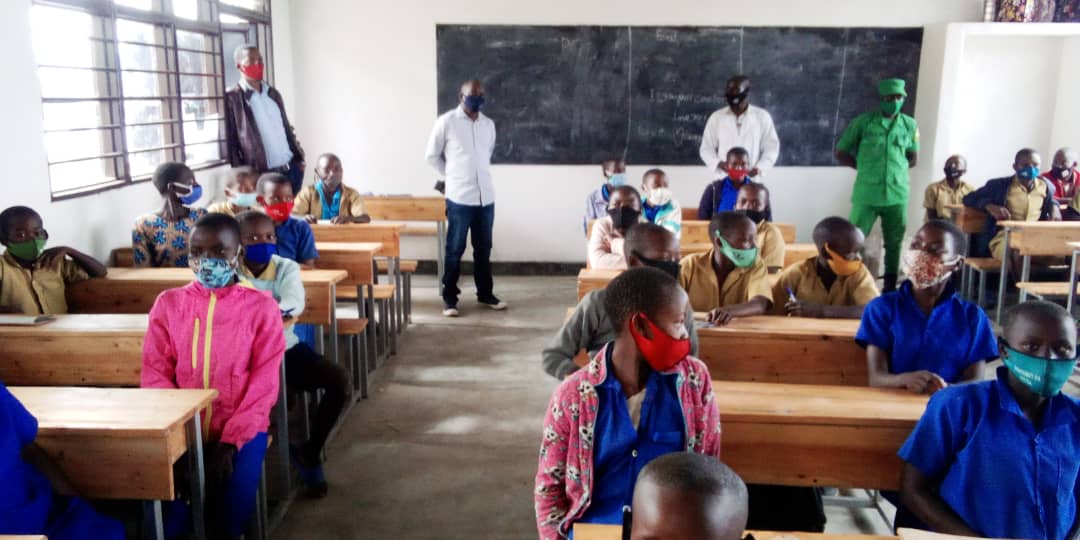 However, one event triggered change and Mukantabana, last born in her mother’s womb is happy to have acted the way she acted.

“I was in Senior Six and one day it rained cuts and dogs. My mother was not able to go get food crops from neighbors. She decided to cut banana from our farm despite father’s warning that he would kill her the day she would step on the farm,” she evokes.

“My step-mother alerted my father who rushed home and picked the banana while renewing the warning: tell your mother to never dare again!”

When the mother returned, Mukantabana told her the story and added: “Mom! You should take her to court. We have to recover our rights.” 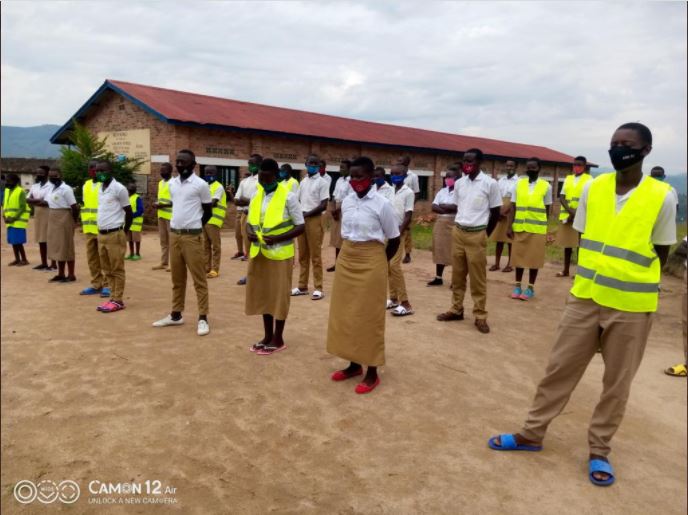 The mother hesitated because she was fearing the worst but Mukantabana convinced her.

“I prepared the case file for my mother and this was my first attempt to advocate for women,” she said.

The primary court-then called Tribunale de Canton ruled for physical separation and ever since, Mukantabana, her mother and the two siblings were relieved.

“We told my father, that if he dared to come again to cause trouble to mom we would beat him up. He desisted,” says Mukantabana.

Through the years, Mukantabana served in several capacities, in defense of women’s rights. She worked at Haguruka, USAID, Action Aid and was once vice president of Pro femmes Twese Hamwe.

After her Bachelor of Law, she studied Human Rights at Master’s level in Belgium and continued to go through ranks until she was voted Member of Parliament among the 24 seats dedicated to women in 2008.

She was elected by fellow parliamentarians as Speaker, becoming fist female speaker of Parliament in Rwanda.

“It was the world’s most female dominated parliament with 55% being women. It was not something to boast for; it rather encouraged my colleagues and I to work hard so as not to disappoint,” Mukantabana said.

Among her parliament’s achievements was to amend laws that were segregating women or refusing them equal rights with men.

In 2013, Munkantabana has re-elected Member of Parliament and she served until 2018.

She is currently a practicing lawyer and member of Rwanda Bar Association. She hates injustice and loves Rwanda.

“When I am away, I miss everything from my country, including the dust, hills and name it,” she said.

Some Quotes by Rose Mukantabana

No one has ever made himself great by showing how small someone else is.

Dignity is inherent to human being not given by a human being to another one. Everyone wherever he/she is deserves it.

The way to get started is to quit talking and begin doing.

With Contribution of Germaine Umukazana and Richard Kwizera

Mrs. Kagame Tells Green Hills Academy Graduates To ‘Think Out Of The Box’

Face Masks: Restrict Their Travel Plans, And Save The Planet