Rusesabagina Verdict And That Rwanda Effect On Western Journalists And Commentators 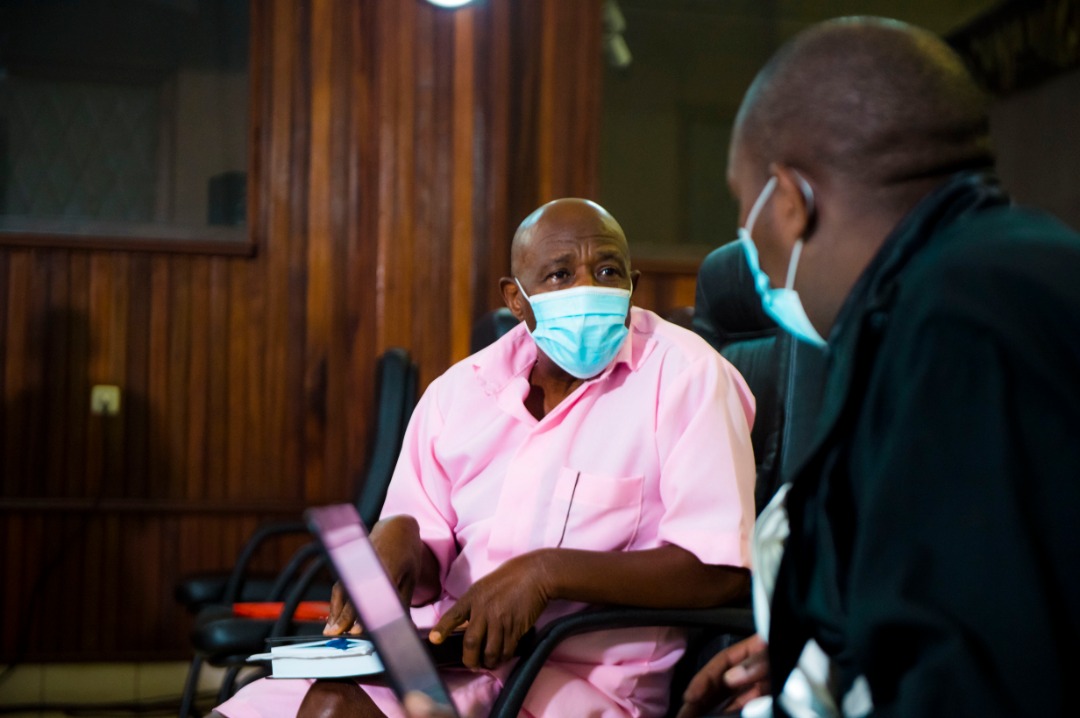 Paul Rusesabagina talking to his lawyer in court

What is it about Rwanda that seems to turn otherwise great journalists into sock puppets, manipulated to regurgitate the propaganda of the planners and perpetrators of the 1994 genocide against the Tutsi?

Ahead of the verdict in the case against Paul Rusesabagina, the Guardian has come out of the traps early, to lead what will no doubt be a chorus of vituperation aimed at Rwanda, if, or as is likely when, Rusesabagina is found guilty.

As one might expect of an article written by a journalist of Chris McGreal’s talent and seniority, the opening paragraph is elegant and arresting. Scratch beyond the surface, however, and it is little more than fatuity skilfully wrapped in spaciousness.

“Before history begun to be rewritten, the hotel manager and the rebel leader were hailed as heroes of the 1994 Rwanda genocide.”

Note that for many journalists and commentators in the West, the genocide against Batutsi, or as they prefer, the Tutsi, is never to be so acknowledged. The purpose of such sidestepping of the truth, to ostentatiously demonstrate a view opposed to that of the Rwanda government.

From the outset, Paul Rusesabagina and Paul Kagame are placed on equal footing, apparently, equal protagonists.

A brief juxtaposition might may show us the validity or otherwise, of that assertion.

In his youth, Paul Kagame was one of a group of young men and women, who made a decision to sacrifice their lives, walking away from their dreams and aspirations, to join an armed struggle, against the murderous thugs, then in power in Uganda.

About the same time, 234 miles away, due south, in Rwanda, Paul Rusesabagina was no doubt trying to forge a career, and ingratiating himself into a party, the MRND (The National Republican Movement for Democracy and Development) at whose core, was an ideology of genocide. He must have impressed the leaders of that movement. They would send him to Kenya, and then Switzerland, to study hotel management.

As the discrimination, and occasional murders on the basis of ethnicity intensified into ever greater massacres, Rusesabagina, now a hotel manager, changed his allegiance to an even more extremist wing of the genocidal establishment, Republican Democratic Movement (MDR-Power).

One man would therefore rise to become a hotel manager, the other, would play a major role in the eventual liberation of one nation, and later on, following the untimely death of his friend, Gisa Rwigema, would succeed his fallen comrade, to lead the forces that would liberate another nation, bringing to an end a genocide that had claimed over a million men, women and children.

And like Rusesabagina, Paul Kagame too belonged to a movement, the Rwanda Patriotic Front (RPF) which would be transformed into a political party.

“And then Rwanda was dead” stated one survivor of the genocide matter of factly, describing the aftermath of the genocide he barely survived. It took the RPF, with Paul Kagame at its helm, to resurrect a nation.

Today, despite the claims of its Western detractors, Rwanda offers a clear vision of what a modern African state could be. Recognising his leadership qualities, former American President Bill Clinton, saw Paul Kagame as “one of the greatest leaders of our time.”

Rusesabagina’s prominence has taken an altogether different route: a Western writer looking for a “feel good story” alights on a hotel manager at the Hotel de Mille Collines. A Western film director reads his story, and the film “Hotel Rwanda” is made.

Neither the writer nor the director bother to look closely at their hero. Instead, they focus on the character they have created. “A humanitarian hero” is born. Accolades follow, and Rusesabagina is lifted high, afloat the hot air that is generated by all the talk of his great humanity.

But he remains true to himself. He never changes from the extremist who was sent to the Hotel de Mille Collines, handpicked by the head of the genocidal government, Jean Kambanda, to keep any eye on the place for them. In a way, it is a duty he never stops performing, serving the cause of MDR-Power.

What does change, is that this time, serving the cause, now does indeed entail rewriting history.

With his newly acquired fame, Rusesabagina tours the most influential nation on earth, spreading a message of which Theoneste Bagosora, one of the chief architects of the genocide against the Tutsi, might have ordered.

“Rwanda is an open prison for Hutu” he tells his American audience. It is like cream to a ravenous cat. They lap it up. As the applause rings ever louder in his head, he begins to feel less the lackey of the now defeated genocidal establishment, and more like one of the leaders, in continuing the fight for the cause.

Why not the Presidency of Rwanda? Afterall, America seemed to be on his side. They could help bring it about. He establishes a foundation, into which Americans pour money. He tells them their money is to be spent on reconciliation efforts in Rwanda. But not a cent ever reaches Rwanda.

A lot of it does however, allegedly find its way to armed groups, hiding in forests on borders with Rwanda. An investment into his future role, when he and his friends, are once again, masters of Rwanda. The money helps to attack and murder communities inside Rwanda.

For the Rwanda government, which had been perfectly content to let him live his fantasy of a “humanitarian hero” a line had been crossed. A judge in a Kigali courtroom, will soon read out how far.

These then are the two men, whom the Guardian would ask us to judge as equals. The former hotel manager, whose Walter Mitty complex would lead him from wearing a middle manager’s suit, to prison pink shorts, is raised to the same level, as a soldier statesman, whose achievements include leading heroic young men, and women, among his people, to literally save a nation.

It beggars belief. And yet there it is, in black and white, in one of the planet’s major newspapers.

But this comes as little surprise to Rwandans. They have come to accept this type of thing from the Guardian, and any mention that it remains one of the world’s great newspapers, is rewarded with ridicule and hollow laughs.

For Rwanda, the question is how to correct falsehoods about itself, when they are weaved by the most skilful craftspeople, and trumpeted as truth, in one of the world’s greatest market places.

Many Rwandans will say, resignedly, that the Guardian has become a mouthpiece for Rwanda’s genocide ideologues and their supporters. They cite the paper’s publication of the so-called Hutu Power propaganda, packaged long ago, to deflect attention from its crimes of genocide.

The assertion may be a little overstated, but it has some justification.

Such a piece would normally have been written by Michela Wrong. She is, it would seem, the designated Rwanda expert, at the Guardian. Of recent however, she has had to contend with robust criticism from individual academics and journalists, she has taken to traducing, for the unforgivable crime of not going along with her claims about Rwanda.

The paper was perfectly sanguine about dismissing Rwandans’ objections to the depiction of their country, but Western journalists and academics had to be given due credence. It seems to have been decided that perhaps, on this occasion, Wrong might sit this one out.

But she may be contented with the fact that her oft repeated claims get an airing, even without her byline.

Once again, through the pages of the Guardian, the Hutu Power message of “double genocide” and even that the RPF started the genocide is disseminated.

“But Rusesabagina goes further, with the unusual allegation that Kagame bears responsibility for the original massacre of the Tutsis by claiming that his forces infiltrated the Hutu militia, the Interahamwe, to encourage killings during the genocide, and to justify the RPF seizing power…”

The first thing to be said about this example of Rusesabagina “going further” is that like the double genocide claim, it is nothing new, nor is it unusual among Rwanda’s extremists.

Far from originating with Rusesabagina, in repeating these claims, Rusesabagina was simply carrying out his masters’ instructions, issued over a decade ago. Instructions that the Guardian now regurgitates.

One cannot escape the impression that these claims sit uneasily with the writer, McGreal’s journalistic integrity. Unusually, he does put the claims of double genocide in quotation marks. But mentioning them at all, surely should be regarded as despicable by any decent, well informed commentator.

We are told that the charges of “double genocide” “infuriate the President” [Kagame]. We do not know how the Guardian knows this. In fact, Paul Kagame knows the Hutu Power ideology, and ideologues well. He takes all the bile that emanates from their malignant minds, with equanimity, rarely, if ever bothering to even mention it.

The repetition of such offensive propaganda does however infuriate ordinary Rwandans, especially the genocide survivors among them. Such claims achieve what the genocide ideologues intend, to open the barely healed wounds of the survivors, as well as of course, muddying the waters to obfuscate the truth of the ideologues’ crimes.

There is the usual repetition of allegations of political assassinations. Even there however, as one might expect of this particular journalist, there is some balance. But his conclusion is bizarre, to say the least.

“Rusesabagina’s arrest and trial suggest that Kagame is interested in publicly discrediting one of the few Rwandans with name recognition globally, and the credibility to make his criticisms stick. The question now is whether this week’s verdict will do most damage to Rusesabagina’s reputation or to Kagame’s.”

If for a moment we consider that both men are who, and what they are, rather than what the Guardian says they are, we inescapably reach a different conclusion: the notion that Paul Kagame spends even a moment, worrying about Rusesabagina is preposterous. And only the wilfully ignorant of the true nature of Rusesabagina, can tout his “credibility”.

His “criticisms” amount to little more than the spouting of Hutu Power venom, familiar to Rwandans. He is just one of many, some of whom stand accused of directly taking part in mass murder.

Paul Rusesabagina will certainly be flattered with the absurd comparison between him and Paul Kagame. And they do have somethings in common: they are both Rwandan, male. They both have the name Paul. There it all ends however.

Paul Kagame’s credibility is founded upon his honour, integrity, and his undoubted abilities and achievements, that continue to promote the wellbeing of the people of his nation. The Guardian’s real question, really, isn’t.

The real question is, if convicted, how long will Paul Rusesabagina get, will his conviction have the desired effect of discouraging other acts of terror, and will the Guardian rise to its own greatness, and quietly, begin to cover Rwanda with the journalistic integrity the paper, and its many excellent journalists espouse.