I Defended Myself – Safari, the Farmer In Assault Case Tells Court 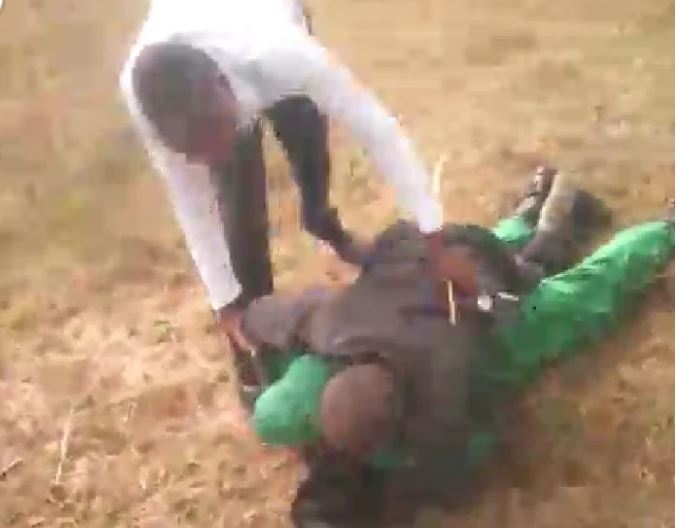 A Nyagatare district resident who was caught on camera holding a local security official has appeared in court on charges of alleged assault of a government official.

Safari George came into the social media highlight last month August after a viral video circulated on various platforms showing Safari siting on the back of one of the area district security officer (DASSO) with his arms squeezing the neck of the officer.

The two allegedly entered into an altercation and a physical scuffle after the security officer tried to arrest Safari for violating animal rearing restrictions in which the resident had been grazing cows in a public space, which is prohibited in Rwanda.

The incident, which involved other local leaders in Karangazi sector, allegedly happened weeks before the social media video started circulating on August 27th 2021.

Nyagatare district officials including the Dasso officer and Musenyi cell leader, have since suspended from duty for allegedly used excessive force in trying to stop Safari from his act of violating standing directives on animal rearing.

During the court appearance for provisional detention hearing this September 7, 2021, in Nyagatare district, Safari told court that he acted out of selfdefense and didn’t have a premeditated motive in his actions.

Through his lawyer, Mugwiza Fidel, Safari asked the Nyagatare primary court jury to release him on bail as the case trial goes on.

Safari narrated that on the fateful day, the Dasso officer stripped naked Safari’s herdsman, and in attempt to intervene, the Dasso officer turned to Safari and attempted to beat (cane) him which resulted into a retaliation in self-defense.

However prosecution insisted that the suspect should be detained for the thirty (30) days mandatory period since he could evade justice especially that he assaulted a government official.

Court listened to arguments from all sides and ruled that the decision on the bail deposition will be read on Thursday September 9, 2021.

Normally, it is culturally forbidden and legally criminal for a citizen to assault a government official while on or in pursuit of official duty, as explained in the law below.

Legally article 234 of Law determining offences and penalties in general indicates that any person who assaults or commits any other act of violence against a member of Parliament, a Cabinet member, a security officer or other official in the performance or in connection with the performance of his/her duties, commits an offence.

A person convicted of any of the acts referred to under Paragraph One of this Article is liable to a term of imprisonment of not less than three (3) years and not more than five (5) years.

If that violence is committed with an intention to kill, the applicable penalty is a term of life imprisonment.