A study conducted by the Rwanda Biomedical Centre (RBC) in 2018 shows at least 3% of Rwandans suffering from one of the cases of mental health, with depression and trauma among the leading cases in Rwanda.

This depression and trauma according to the research is caused by many factors including the country’s history of genocide against Tutsi, drug abuse and social economic factors and discrimination among others.

Sandra Nadege Uwayezu, 18, is a living example born with yellow hair which added to her childhood life of discrimination leading to self-isolation, denial and depression.

Moving from a community school to St. Andre as a result of excelling in class, Uwayezu says her former teachers wondered how she would cope with a new student’s community especially that she looked different.

“I felt I could do better things with my life, though some children didn’t bully me outright it was indirectly, by looking at me as different because of my hair. I resorted by closing myself from others and used that energy to excel in everything that I did,” Uwayezu said.

Going through this childhood of looking different, struggling with love relationship, sexual reproductive health issues and a bit of drug abuse, Uwayezu tells her story through her first book – “Light in the Dark” which is aimed to help the youth to manage depression but also parents to parent their children.

The book that was authored at age 17 tells her life story (9-16-years) of living in the dark as a child born different from her siblings and community around her. With yellow hair, which is commonly known among alibino, she spent two months to write the manuscript and publish two years later.

Though born and named Uwayezu, the book author doesn’t normally use the surname and prefers to identify her self as Sandra Nadege and also use pseudo names in her “Light in the Dark” published locally in house at Ubuntu Publishers in Kigali, was launched this weekend during a book launch that was also attended by the First Councillor to the German Embassy in Rwanda, Charlotte Renate Lehner.

In one of the chapters she shows how it was difficult to be her own self and live to her own dreams. With this commitment Uwayezu excelled in sciences and was referred to as the science girl but in her dreams she never thought of being a scientist but a writer, singer and artist. 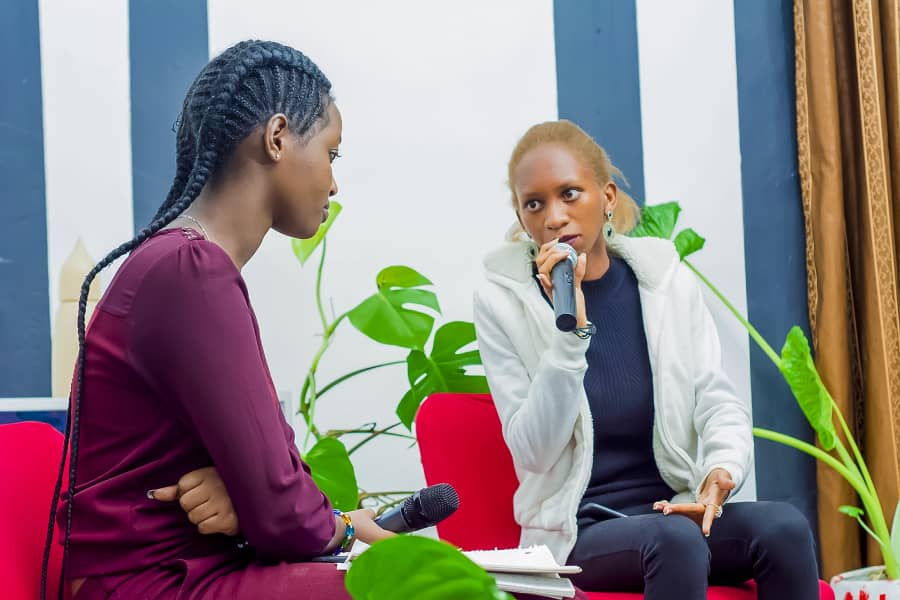 “This book tries to show parents that we children are not projects. We have feelings, dreams and aspirations in life but parents don’t get closer to us to find out what we are. They think we can be planned and shaped like projects,” Uwayezu said.

The author says that the book is going to be a light to others, especially the youth in Rwanda who undergo difficulty to deal with mental problems, understanding their true self, through walking the path of Uwayezu where they can pick some lessons to become better persons.

“I want people to read my story, walk through my steps and use it to do something about their lives to become what they want to,” Uwayezu said.

One student, Michael Gakuba, 26, who attended the launch said that meeting Sandra Nadege in her book and real life today changed his preset ideas on relationships with women after going through a history of drug abuse and mental problems as a result of having a bad experiences in relationships with girls.

Sandra is such an inspiration to me. The first time we met I saw a lady with potential in everything and I realized in her life that no matter how people judge you, you can be and do better to find meaning in life,” Gakuba said.

Mutesi Gasana, the publisher at Ubuntu Publishers says that the story of Sandra Nadege Uwayezu is not only touching but also a lesson for her as a parent and a publisher.

“It took me many years to decide to publish this book because I was not sure if this story wouldn’t damage the life of the author who was very young by then, but re-reading her story left me crying for days and amazed at how the story was so well written,” Mutesi said.

Mutesi says that Ubuntu publishers will help Sandra Nadege to promote and sell her book among university students which will help to use her story to educate other Rwandan youths who struggle with similar teenage life experiences.

Impressed by Sandra Nadege’s gift of writing and commitment to publishing, Ubuntu Publishers stated the book author has officially been recruited as a book editor- which could arguably make her the youngest book editor in Rwanda at 18years.