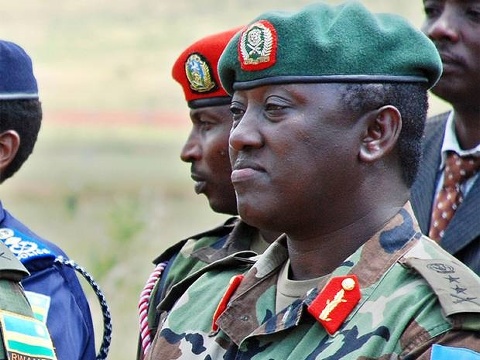 President Paul Kagame has lashed at UK’s arrest of Rwanda’s Head of Security and Intelligence saying this is an act of arrogance and contempt.

Kagame made the remarks this afternoon at the parliament as massive protests demanding for the release of Gen. Karenzi Karake across the country entered the second day.

Rwandans have jammed the streets of major towns across the country protesting against Britain’s arrest of Gen. Karake on June 17. 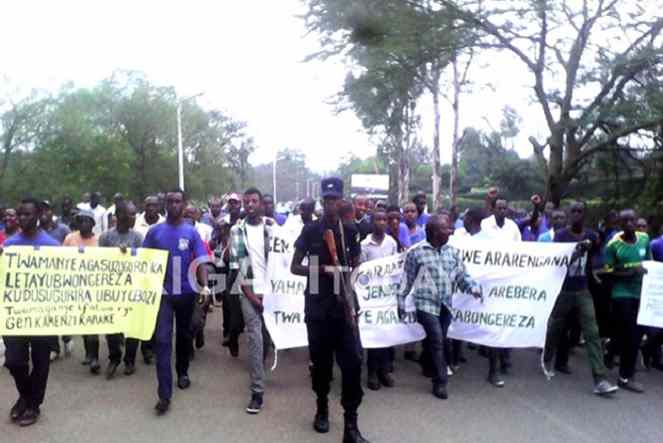 Massive protests across Rwanda’s towns have entered the second day demanding the release of Gen. Karake arrested in the UK

Schools have closed and farmers in the villages have abandoned their gardens and are now protesting in the streets.

The UK embassy is already surrounded by peaceful protesters. Loud music of and patriotic songs is being played. 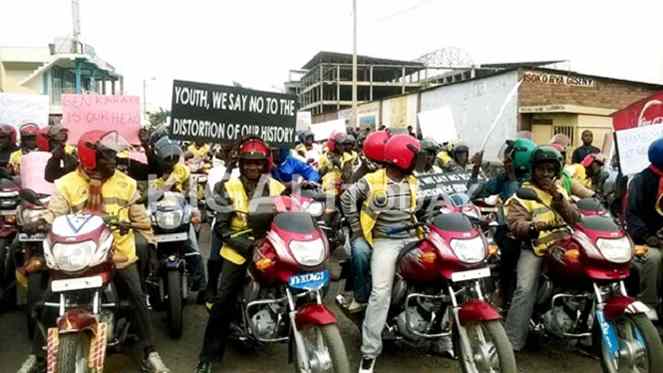 “He fought with us to make this country what it has become and on this long journey towards what we want to become,” he added. 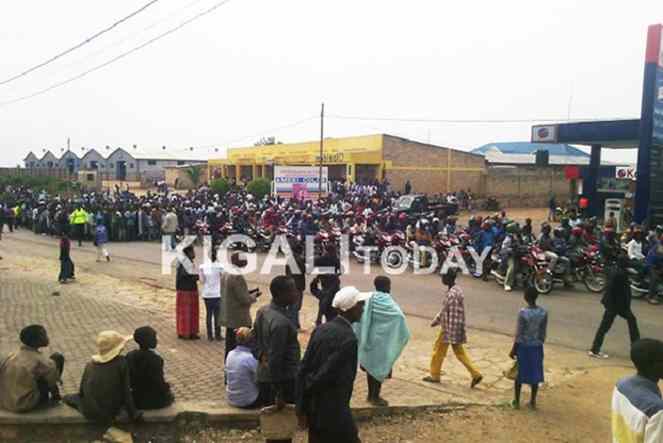 Karenzi, who was on official duty, has diplomatic immunity, but the UK police deliberately bypassed the procedure.

Kagame said it was unthinkable to “pick an official like any of other thugs on streets. Someone with diplomatic status.”

Rwanda’s Foreign Affairs Minister Louise Mushikiwabo, who flew to Europe to discuss the matter, described the arrest of Gen. Karake as “an outrage and lunacy”.

The General has been a regular visitor to London despite being targeted by the European Arrest Warrant (EAW) since 2008.

Sources in UK say that Rwanda’s chief spy was in the UK on invitation by M16, but it seemed like a trap.

The meeting was canceled and two days later he was arrested by UK’s Scotland Yard officers at Heathrow Airport as he was boarding a plane back home.

Rwanda was not informed about the arrest until security organs in Rwanda learnt about it from social media.

When contacted, the UK told Rwanda the General was arrested on request from Spain to answer crimes committed in Rwanda.

The UK embassy in Rwanda said, “the arrest…was a legal obligation …following the issue of a valid European Arrest Warrant.”

The Spanish indictment accuses 40 Rwandan top military officers, including President Kagame, of the deaths of Spanish aid workers between 1994 and 1997 in western Rwanda.

Gen. Karake is a revolutionary and was part of the liberation struggle that defeated the genocidal regime that massacred over a million Tutsi in 1994.

He was appointed deputy commander of the African Union peacekeeping force in Darfur, Sudan from August 2007 to January 2008 and later became deputy of the UN mission in Darfur.

“Suggesting that Gen. Karake and other Rwandan leaders are guilty of crimes against humanity is an insult to our collective conscience,” said Williams Nkurunziza, Rwanda’s High Commissioner to the UK.

“There are no grounds anyone should have arrested our head of intelligence, under no circumstances…” Kagame said.

Ironically, the general has a Masters of Business Administration from the University of London.

Former International Development Secretary, Andrew Mitchell has said the Spanish indictment are politically motivated and not about justice.

“Let’s be very clear, they are being pursued by supporters of the genocidal regime which murdered up to one million people in Rwanda,” Mitchell said.

Rwanda says Spain has never raised the issue or try discuss the issue. “It is actually Rwanda that has gone to Spain and asked , what is the problem?” Kagame told parliament.

The Judge Andreu Merelles indictment, Inshuti and S’Oliver, were cited in the 2009 UN Group of Experts report for providing material support to FDLR.

These NGOs received nearly €200,000 in grants from the local government of the Balearic Islands to prepare the indictments against RPF.

He said the matter has been discussed  between Africa and Europe, but every time they want to salvage it.

“It is a continuation of slavery, colonialism, arrogance and bigotry,” kagem said.

The President said despite the arrest having caused distress, the country needs to “keep heads cool” “Non of these countries have basis other than arrogance and contempt.”

Meanwhile, 21 years after the genocide, countless killers are still traveling freely in Europe, including in the UK.

Alain Mukurarinda, the Spokesperson for the National Public Prosecution Authority told KT Press that  the UK judicially has not yet responded or reacted to Rwanda’s extradition request made on the 12 suspects since last year.

Below are some of the genocide fugitives living in Europe and have never faced justice.

Save Kaberuka From Politics, He Is Interested In Business