From Rags To Riches; Story Of Rwanda’s Gikongoro Region 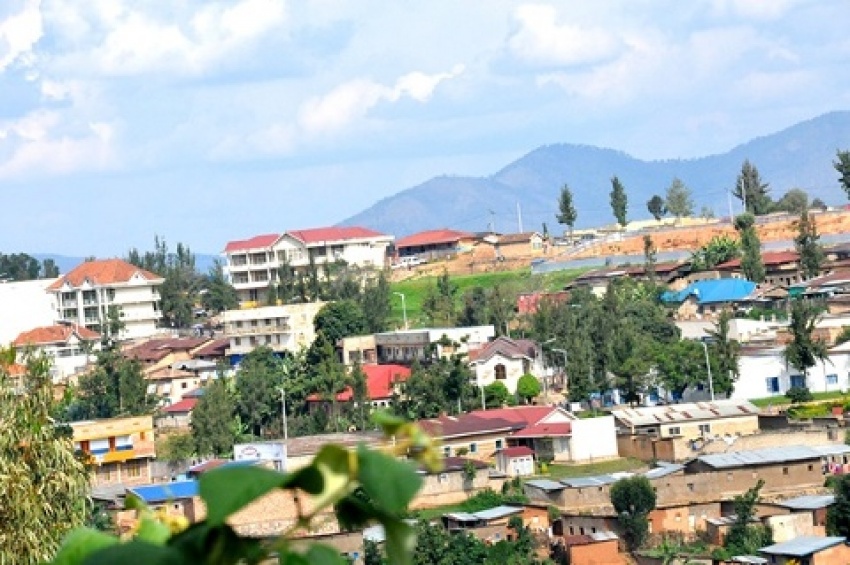 A new face of Nyamagabe town.The area was formerly deserted. It has since been transformed and attracted more investments.

He wanted to meet them and discuss how to develop their region that was limping.

“He (Kagame) challenged us to do something for our region which many Rwandans thought had been cursed,” Francois Kanimba, Rwanda’s Minister of Trade and Industry told KT Press.

Nyamagabe had been deserted. Hundreds of residents had fled the area as others succumbed to hunger until the late 1980s. The soils were infertile and only eucalyptus trees would try to grow. The area looked like an “abandoned property”.

The meeting between Kagame and Nyamagabe’s influential leaders and business the community resulted in various solutions including; creation of a Multi Sector Investment Group (MIG) also Rwanda’s pioneer collective investment group. It aimed at promoting profitable investments to benefit the local population.

However, the investment group became stagnant and the president convinced his government to support it. MIG had ventured into honey production, tree planting, tea and coffee production.

Ngarambe adds that the government “topped up with Rwf60 million for five consecutive years”.

The group eventually invested in a $ 10 million Mushubi tea factory with a 20,000 tons annual production capacity.  Nyamagabe also hosts Kitabi tea factory with 17,000 ha producing 2,250 tons and generated $ 7 million in 2014 out of a total $ 51.76 million countrywide.

Coffee has earned MIG many awards, including the Cup of Excellence in 2008, which rewards best coffee farmers worldwide.

Ngarambe says that MIG is currently valued at Rwf10 billion with over 3000 workers.

Was MIG a tip?

Meanwhile, in 2007 Minister Kanimba constructed a 4-storied commercial complex in Nyamagabe to break the monopoly of an only 2-storied building that existed in town.

It was evident there was a significant change in Nyamagabe, including introduction of a bus transport company replacing traders’ trucks.

“Huye residents come for shopping. Others come for work or for leisure,” he told KT Press.

Following the campaign, Golden Monkey Hotel, named after the attractive primates of the nearby Nyungwe national park, started with a restaurant-bar, hotel rooms, a night club and a live band, locally known as ‘igisope’ for traditional music lovers.

It produces 10,000 electric wooden poles annually, for both Rwanda and Tanzania, according to Joseph Munyarukaza, a senior staff at NFC. A wooden pole costs up to Rwf100, 000.

Nyamagabe annual revenues have increased to Rwf622 million in 2015, from Rwf338 million in 2011. Its annual budget was increased from Rwf11.9 billion in 2013 to roughly Rwf13 billion for the 2015-2016 budget, almost equivalent to Rwf13.3 billion budget allocated to Nyarugenge district in Rwanda’s capital Kigali.

Meanwhile, over 17% of Nyamagabe households are now connected to electricity from 3% within the last 4 years. The electricity is generated from Rukarara hydro-power plant, funded by government to a tune of $24 million. The region’s financial sector is also booming with the top five commercial banks operating their branches there.

But where has Nyamagabe come from? 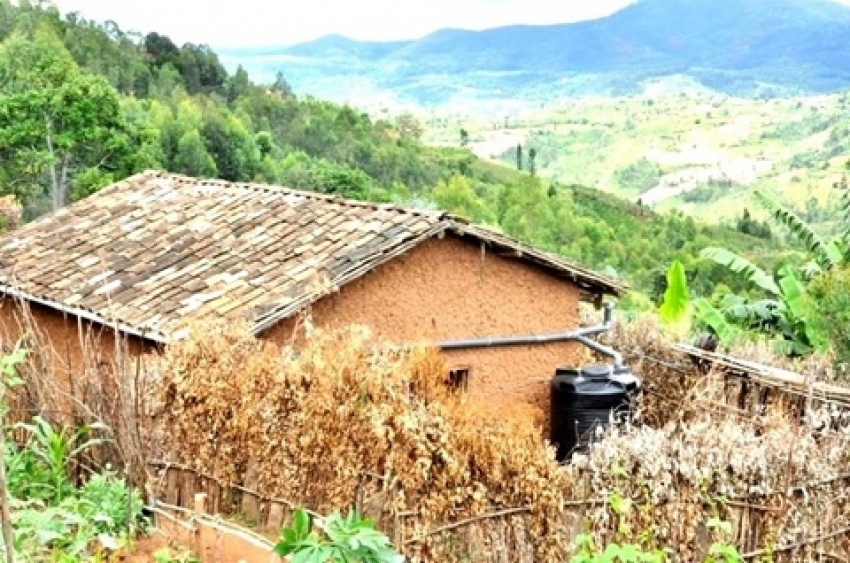 Every household has an installed water tank to enable water harvest and irrigation.

In 2006, about 20% of households in Nyamagabe had been hit by famine, families with poor food consumption patterns. “One meal a day was a luxury in my time,” says Mukarucogoza who witnessed death of her neighbors due to severe drought that hit the area in 1987.

The government tried several programs to improve the condition.

Farmers in Nyamagabe, particularly in Cyanika sector, were moved into rural settlements locally known as imidugudu. Every household in the sector acquired a water tank for water harvesting and irrigation.

As a result, the area is home to green fruit trees and vegetable gardens throughout the seasons.

Four years later, in 2006, the World Food Program indicated that it had moved to 6 % of  households with poor food consumption.

With this, farmers secure enough arable land where they grow one crop and harvest abundantly.

Farmers and government share by a half the price of fertilizers and improved seeds and it is bearing fruits. 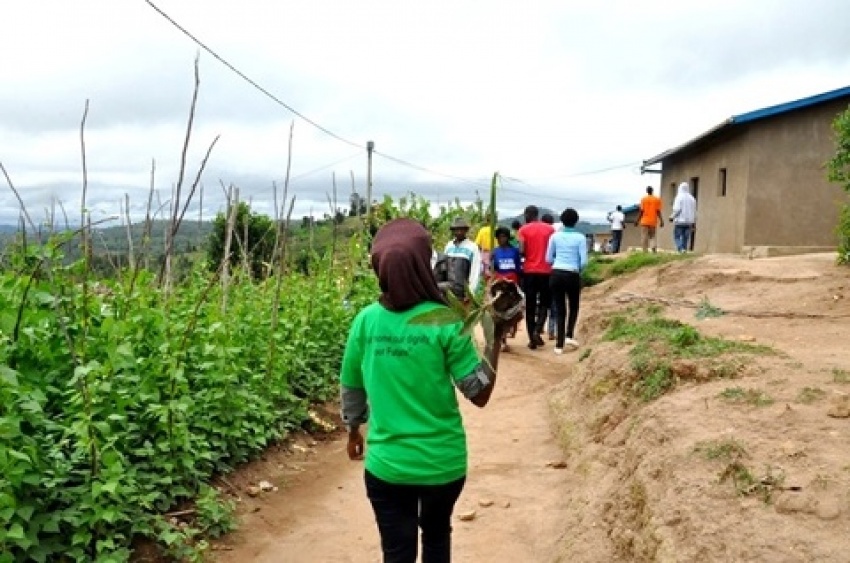 A view of climbing beans. Farmers in the area mostly use fertilizers to improve crop production

“There is no curse in our land; we just need fertilizers to harvest enough,” says Jacqueline Mukarucogoza 50, one of the farmers.

Nyamagabe’s staple food including Irish potatoes and cassava increased to 28 tons per hectare last year, up from 15 tons in 2010.

Mukarucogoza grows 100kgs of beans and green vegetables on a small piece of land in Cyanika sector, thanks to fertilizers and a cow given to her under President Kagame’s ‘One Cow per household’ initiative.

The program has since 2006 given free cows to 10,000 and 250,000 households in Nyamagabe and countrywide to improve community wellbeing.

With their slogan, Dukorane umurava dutere imbere, (let’s strive for development), Nyamagabe poverty levels decreased from 47% in 2002 to 36% in 2012 and the trend is continuing successfully.

Once a hunger stricken region is now one of the country’s food basket. The smiles on the faces of the farmers is enough evidence. “Now, we can afford three meals a day,” says  Mukarucogoza. 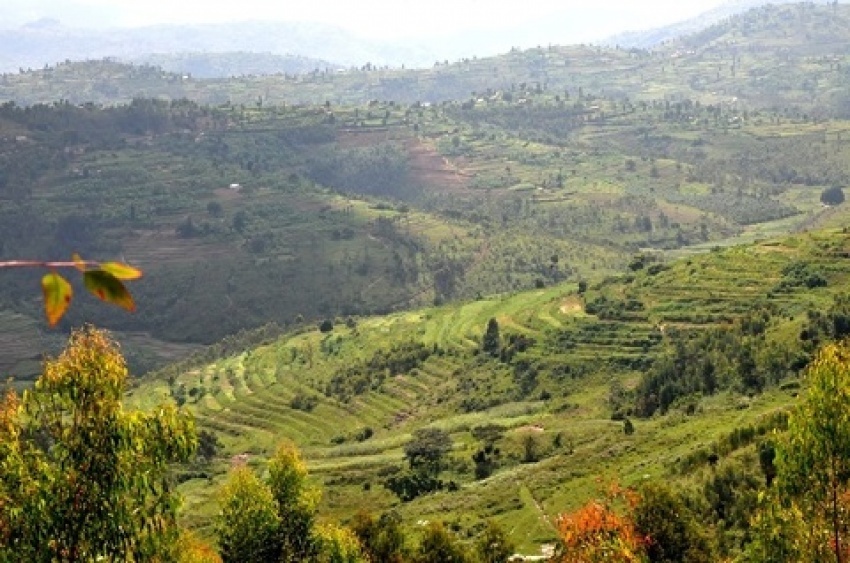 Terracing is nowadays a common land management practice in Nyamagabe. This has helped in controlling soil erosion and subsequently raised crop production.

I feel Your Pain, Kagame Tells Rape Victims of Genocide