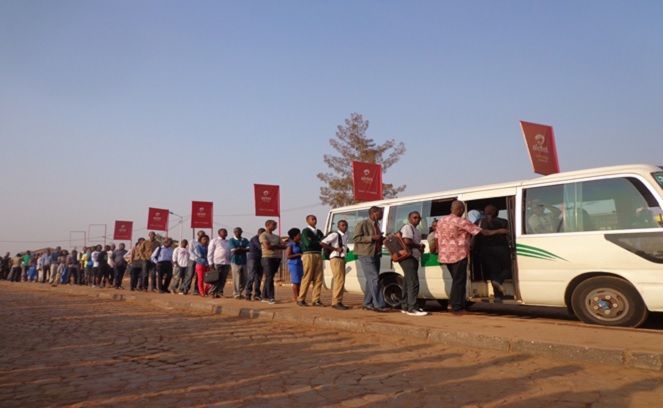 Most residents in Kigali city will have to embrace public transport system as some streets within the city have been gazetted under the ‘car free zone’.

It is 5pm in Rwanda’s capital Kigali as schools and business begin to close. Crowds of city dwellers converge at bus stations as the sun sets and orange road lights fade in.

The long queues of commuters at bus stations seem never to end. The bus attendants issue tickets to queuing passengers as they board one after the other.

Other buses are coloured blue, orange and green corresponding with particular destinations. This helps the general public identify a particular bus enroute to their preferred destination.

The Yellow buses are new and are for students. They arrive at the terminals in intervals of five to ten minutes as passengers alight.

A bus starts a maximum 1 hour trip to the last bus stage on the black and white tarmac roads with lights, all over the 730 km² hilly Kigali at Rwf 200($0.2).

On board, some people with unfinished business keep sending e-mails; others find time for social media interactions. The buses are fitted with high speed internet known as ‘the 4th generation wireless internet.’

Francis Rangira 80, a veteran educationist is a witness to the evolution of Kigali’s public transport from footpaths to tarmac roads plied by city buses.

“It is a miracle,” he sums up as a man in his forties gives him priority to seat in a brand new bus in down town Taxi Park.

The Mayor of City of Kigali, Fidele Ndayisaba says nothing is for granted.

“We want every city dweller to make a bus their favorite means of transport, instead of spending heavily on a private cab.” 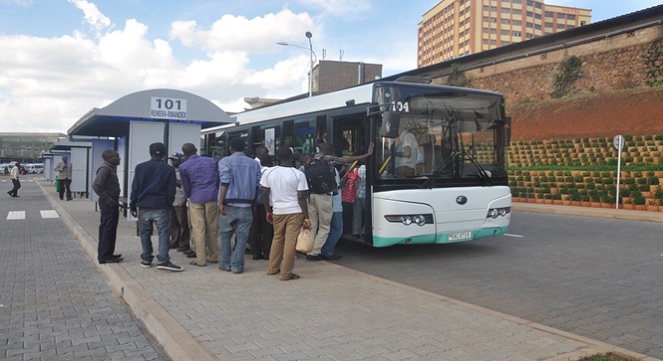 One of the Smart buses at a terminal in Kigali. Most of them are fitted with WiFi internet

Plan to build a new city

A clear idea to organize public transport in city of Kigali was hatched in 2010 in a master plan by Surbana Ltd, a Singaporean company which proposed in a detailed infrastructure plan of Kigali until year 2040.

The one million dollar project proposed six major reforms including a green transport project where 70% of city dwellers should use city buses, against cabs (30%); “because the smaller the cars in transport, the bigger the number required,” says Bruno Rangira, the city of Kigali Spokesman.

Requirements included creating a transport network where a commuter does not spend more than five minutes at a bus stop. In the past, a bus was never reliable.

They also had to improve their customer care to clean a bad image of a bus crew which used to abuse commuters or bother them with poor hygiene.

Transport had to be consistent from 5am to 11pm, ending an irresponsibility of transporters who could stop business during pick hours.

However, there were no bus fleets for this ambitious target, except 400 cars largely 18 seats mini buses.

Companies ordered for 60-seater buses from Hyundai, and Yutong, the automobile brands from South Korea and China.

Nilla Muneza, the Royal Express boss with 100 buses secured a $ 2.3 million loan from Ecobank and Bank of Kigali to reimburse in four years, with an interest rate of 19%.

He shipped the buses worth Rwf 100 million ($137,877) each, without customs fee because public transport is among priority sectors which are exempted.

“Transport becomes a business where someone can venture proudly, the order in the sector is helping us to make return without much harm,” says Muneza.

Other companies also imported buses, increasing the number to 813 buses in Kigali today, against a total 3,040 buses in the traffic countrywide, according to Rwanda Utility Regulatory Authority (RURA). 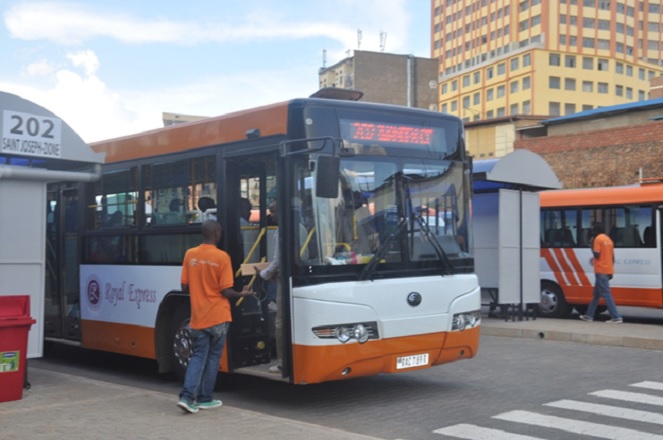 Effective August 24, no car will be allowed in the heart of the city. Except special services vehicles, others are prohibited in the streets of the declared ‘Car-Free Zone.’

Luben Ahimbissibwe, director of infrastructure in the city told KT Press that, “Normally, a city is for people not vehicles. We want to turn Kigali into a pedestrian-friendly city”.

The rapidly growing city of 1.1 million residents has gazetted some streets to create a ‘car free zone’.

Ahimbisibwe told KT Press that the decision to avoid city traffic “Is to maintain green transport and sustainability of the city.”

“We will establish designed rest posts with free WiFi internet services for pedestrians…People will be walking a minimum of 500 meters and will need to rest,” Luben told KT Press.

Meanwhile, before the Car-Free-Zone, Kigali transport system has undergone several inovations. The city hired Olleh Rwanda, a South Korean IT company to enroll Wi-Fi internet in all buses, at a cost of Rwf 3000 ($4) per bus daily, according to Muneza.

In another deal transport operators hired Ericsson an international IT company to install a system that will allow cashless payment. Ericsson will earn Rwf 3 from every passenger boarding.

Ericsson system will also allow tracking of buses in traffic. 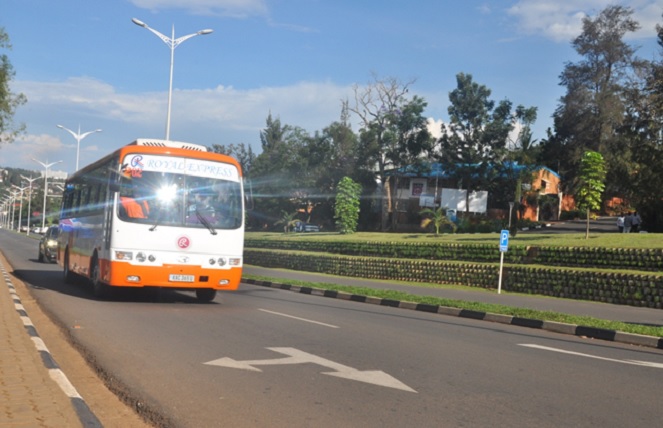 A passenger bus on one of the roads in Kigali city. The city has organized transport

Kigali is still struggling with increasing traffic jams, which, in many instances delays buses to pick passengers from some stages. Kigali is constructing more roads to decrease congestion, despite high costs in construction due to rolling terrain and heavy rainfall.

Projects in pipeline include a Bus Rapid Transit (BRT) destined exclusively to buses with 100 seating capacity.

Coming from far away

Kigali started having some form of public transport since 1970s, when the 18-seater Toyota Hiace omnibuses arrived in Rwanda.

Simultaneously, Nissan UD buses with 60 seats came in as a donation from Japan for transport of civil servants and for the shabby roads upcountry.

Currently, government is looking for a bidder to take the buses because it failed to manage their operations.

Meanwhile, order keeps improving with private companies taking up the opportunities in transport.

“Unfortunately I won’t enjoy this development for so long because I am old,” says Rangira. 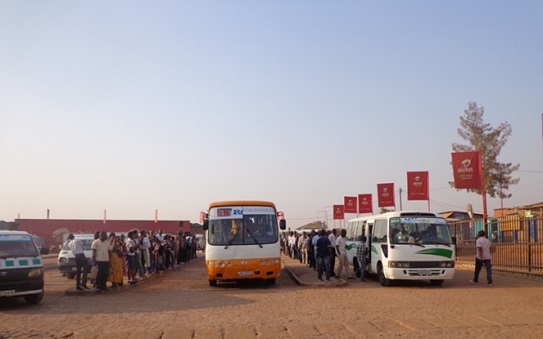 Passengers boarding buses at a bus terminal in Kigali city

More Cement In Rwanda At Give Away Prices