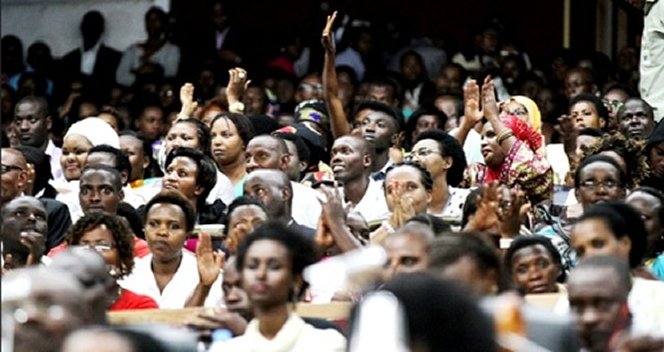 Rwandans attend the plenary session at the country’s Parliament

A constitutional amendment tabled in Parliament has scrapped the seven-year two-term presidential mandate – a move the Lower Chamber of Parliament says is meant to realign Rwanda to its regional peers.

But the changes did not go down well with some members who accuse their colleagues of renegading on “what the people asked us to do”.

Article 101 in the current 2003 constitution allocates only two seven-year terms in power for a President. They could only be amended by a large margin of parliament, approved by a referendum.

However, a mass movement launched last year culminated into a parliamentary consultative project that took lawmakers back to villages to listen to the electorate.

More than 3.8m people signed petitions seeking amendment of Art 101 – specifically demanding that President Paul Kagame be given leeway to be voted again as leader. Lawmakers returned with various proposals including scrapping off of the term limits completely.

Another proposal was that the term limits are scrapped for ONLY President Kagame, and when he is no longer head of state, the term limits be reinstated. However, in the final draft bill presented to Parliament this Wednesday by a parliamentary commission of the top leadership of the House, it has been proposed and adopted that terms are reduced to five years.

The proposal sailed through by vote of 72 of 75 lawmakers present. The House has total of 80 lawmakers. The amendments provide that the president will serve for only one five-year terms, renewable ONLY once. Even with this, there has to be what was described as “popular demand”.

Following the passing of the bill, there was immediate opposition from some of the most vocal lawmakers. Ruling RPF party MP Jean Marie Vianney Gatabazi said the new changes “completely contradict what the people demanded us to do.”

“I do not understand why we reduced the term to five years, while the seven years were meant to help the president to finish his program without hindrance?” asked Gatabazi.

He added: “Besides, we are doing the opposite of what the electorate sent us to do in the first place.”

In defense of the bill, Jeanne d’Arc Uwimanimpaye, the Lower Chamber Vice President and part of the Bureau Commission which worked on the amendment proposals, said the changes were “strategically adopted to realign Rwanda with our regional neighbours”.

Uganda, Kenya and Tanzania – all members of the same East African Community block, have two five-year terms for heads of state.  “Harmonization with the region was a big factor,” she added.

Uwimanimpaye also said that during the upcountry consultative program, there were many other proposals from voters as to how presidential terms should be handled.

“Some suggested four years, others five years – many of them also preferred scrapping term limits completely. We opted for five years,” said Uwimanimpaye.

But for the forces fiercely opposed to the new changes, it turned out to be a hard pill to sell.

The whole amendment exercise, as petitions demand, should have arrived to one thing – never a third term for any other president, except for Paul Kagame.

As per Art.167 of the bill proposal, upon expiry of his last term in 2017, President Kagame will have the window to lead again for seven years, after which the agreed five year-terms renewable once, apply.

The President of the Republic in office at the time of commencement of this revised Constitution shall continue to serve the term for which he was elected.

The provisions of Article 101 of this revised Constitution shall be applicable after the expiry of a seven (7) year term which shall start upon completion of the term of office referred to in Paragraph One of this Article.

Considering the citizen petitions preceding the coming into force of this revised Constitution that were informed by the nation-building achievements and creation of a sustainable development foundation, the President of the Republic completing the term of office referred to in Paragraph One of this Article may be re-elected for a seven (7) years term of office.

The President of the Republic who has completed the term of office of seven (7) years referred to in Paragraph 3 of this Article may be re-elected as provided for by Article 101 of this Constitution.