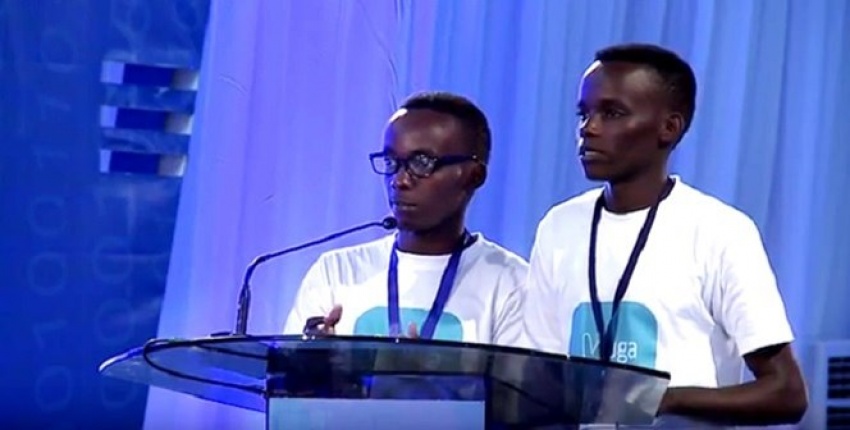 New innovations by young ICT entrepreneurs showcased at the Transform Africa summit in Kigali, Rwanda have attracted attention of investors that want to turn them into profitable ventures.

“We have that competitive advantage of not being limited to a single network,” says Umuhoza.

The two innovators are seeking $ 20,000 and have accepted offers from two investors. Including Tigo telecom that wants to join them in an advisory role.

Tigo representative at the summit told the innovators, “you managed to bypass our system.”

The Vugapp partners agreed upon an offer by two investors.

Another Rwandan, Louis Antoine Muhire, founded Mergims an application that allows a foreigner to send money home for a very specified expense, “to allow effective use.”

Muhire said for example one can buy electricity, airtime to a relative in Rwanda, or can pay scholarship; a deal that Ecobank and Equity Bank have already appreciated, with now $ 50,000 that was transferred since early this year.

He said the sender pays 58% less than other money transfer mechanisms like Western Union.

Torque Ltd, another Rwandan application that allows business people to do their operations reliably, especially in the distribution did not attract attention of investors a lot, if not Eugene Nyagahene, who promised to give $ 35,000 through another investor, but none was ready.

The two winners departed with a total Rwf 40 million. The only Kenyan pitch Sufuria.com website that teaches African cuisine, and then proposes to deliver ingredients door to door did not attract any investor willing to join with $ 150,000 that was demanded.

Other funds were given to two winners through the Reach for Change by Reach For Change initiative in partnership with Tigo Rwanda.

Tango TV is an application designed by Joseph Victor a Tanzanian graduate of computer Science.

He says the application helps streaming local television content, including entertainment, movies and other programs.

Victor had to convince at least one of the investors at the summit who had expressed their interest to the pitches for an eventual deal.

He said, “the region has quite a lot of content, with Tanzania for example launching at least a movie every single day.”

He said that TV subscription is expensive to communities in East Africa, and thus proposed this app that would be used on several gadgets, and can be installed in a TV Box. The box goes for $ 50.

Victor requested for $500,000 for his venture, but Eugene Nyagahene, a Rwandan investor and representative of Dstv in Rwanda, and Pascal Ltd wanted to bargain on amount of shares that would allow them to give the investor the fund he would need for streaming between 10 to 15 years.

It was decided that the two would approach Victor for further talks.

Calls From Rwanda To Uganda Increased By 800%