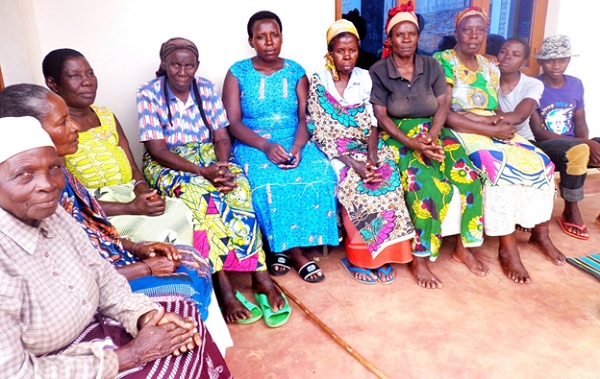 Kayenzi village in Kamonyi district is known for producing sweet and juicy yellow pineapples. Early morning, farmers are seen attending to their gardens on the surrounding hills beautifully decorated by the pineapples.

The village trading center about 9km from the Kigali-Huye highway has about five small shops. Several students from a nearby technical school in white and khaki uniform are loitering in this quiet village.

VTC Kayenzi, a technical school sits on a massive piece of land on a gentle hill neighboring a health center, a kilometer away from the trading center.

Old houses made of mud with rusty tiled roofing are surrounded by nicely trimmed shrub fences, a trend for the entire well-organized village.

However, on the other side of the school, a big house built from brown baked bricks and expensive red tin roofing, attracts a visitor’s attention.

One would wonder why the owner of this modern swanky house chose to settle here, a place that has no access to the kind of amenities well-off families tend to settle next to, such as those in high-end Kigali neighbourhoods. 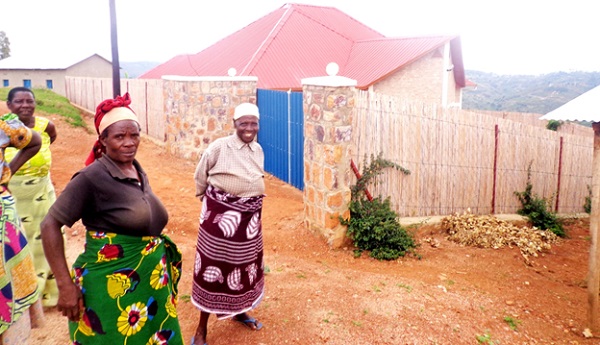 Through the gate into the compound of this house, with glass fitted windows and main door, one is welcomed by a calm atmosphere, with lawn freshly growing garden. On the right side is a kraal, where a cow and its calf are being fed fodder.

In the backyard, there eight elderly women (aged between 72 and 100 years) dressed in Kitenge and resting on the wide veranda; and chatting.

“There comes the man I said I am dating,” Eusterie Mukarurangwa, 100 years old, tells her colleagues referring to this writer. The joke tickles everyone including 75 year old Magdeleine Nirere, who was carefully brushing her teeth. They laugh so loudly, almost cracking their ribs.

A keen observer would easily tell these women share something in common. Well, they are widows. Their families were all wiped out during the genocide against Tutsi in 1994.

“I wake up earlier than anyone here, only to enjoy the early sunshine. I cannot do any work, even my eyes don’t see well,” says Gertrude Mukakibibi 73, adding that her house-mates also have several health challenges.

Some have asthma, others heart weaknesses. The eldest has a deformed backbone after an attack by Interahamwe who left her agonizing during the 1994 genocide. “I only survived by God’s mercy,” she says.

Unfortunately, this ordeal is shared by many others across the country and is weighing heavily on the society even though several initiatives have tried to help.

Unity Club, an association of spouses of senior Rwandan politicians mobilized funds and built this house in December 2014.

It’s now their new home, with a paid caretaker who lives with them.  Chaired by the First Lady, Jeannette Kagame, Unity Club raised over Rwf 38 million for this fully furnished house. 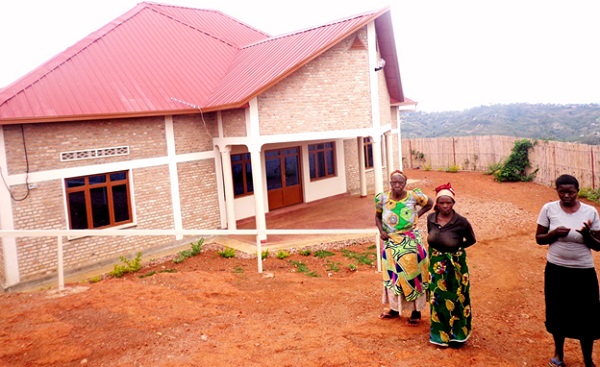 On top of the house, the family was donated a cow that produces milk which they add to their already rich menu composed of locally grown foods including; tubers, beans, rice vegetables and fruits.

Sometimes they want a traditional Rwandan cuisine, including boiled bitter green vegetables (udutagarasoryo). “I go to several villages until I find them,” says Josephine Mujawiyera, the caretaker.

Veronica Nirere, one of the women, says, “Our caretaker goes by our order. We can change the menu any time.”

AVEGA, an association of widows of genocide, provides Rwf300, 000 per month for groceries and wages for the two house helpers, the cattle keeper and the maid.

Meals are prepared by the maid as determined by the caretaker, who is like a mother in the house. She interacts with the elderly women and ensures most of their needs and requests are met.

She is literally their mother. She washes their clothes, lays their beds, and takes them to church or to the nearby health center for medication.

While Nirere and her colleagues are grateful for this new precious home, hundreds of others across the country are in serious need for homes too.

The 2014 Genocide Survivors’ Fund of Rwanda (FARG) survey indicated that there are over 1500 elderly widows of the genocide, of which 900 need settlements. 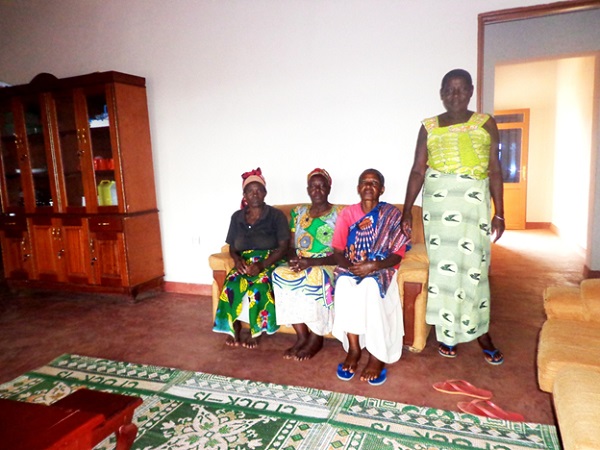 However, with limited resources, Unity Club is contributing to the efforts of fixing this gap, while AVEGA offers support towards their welfare.

Meanwhile, the government allocates each one Rwf30,000 as monthly stipends.

This is four times the support other vulnerable Rwandans receive, Rwf7000 per month, because “their case is different; they are not only poor, but also incapable to achieve any work,” explains Regis Gihana, in charge of settlement at FARG.

Fourteen elderly women allocated in four units and 2 elderly men in a separate unit live in the village together with four caretakers on top of five guards who alternate night and day shifts. The village is home to 20 members.

The units are equipped with mahogany furniture and sofa, a sign these elderly are treasured.

“We are fed, we sleep on nice beds, we wake up to a good breakfast and spend the rest of the day entertaining each other,” says Dancilla Nyirafandi, one of the beneficiaries.

They don’t feel lonely and abandoned anymore. They are more secure. Although each house has four rooms and a kitchen, they have opted sharing meals from the same table, but back home, each family can switch on their TV screen to watch news, except a few whose screens have been broken down.

At the moment, more units with the same setup, estimated at Rwf50 million each, are being rolled out across the country. There is one in Kayonza, Rwamagana, Rulindo and Huye districts. 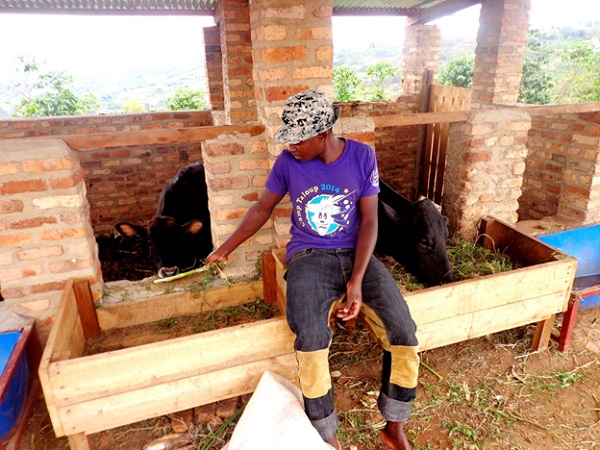 Rulindo house was recently launched, while the other houses will be launched soon each to host 8 elderly widows.

The twin houses in Kicukiro and Nyarugenge districts, all in Kigali City, host 16 and 18 elderly respectively.

Their setup is different from the previous ones, whereby an elderly is settled in one part and a caretaker’s family in the next part of the twin house, according to Gihana.

The 100-year old Mukarurangwa, who lost all her six children and the husband during the genocide, narrates the nature of risk vulnerable widows face.

She recalls in 2013 when unknown assailants stormed her house and forced her to give them money, which she did not have. “They strangled me and left me almost dead. They broke my backbone,” she said.

But now she is comfortable, happy, secure and settled.

He colleague Nirere, with a wide smile on her face, has one sincere word, “We are thankful for the First Lady’s generosity.  We know there are many Rwandans who need such favours, but don’t get it.” 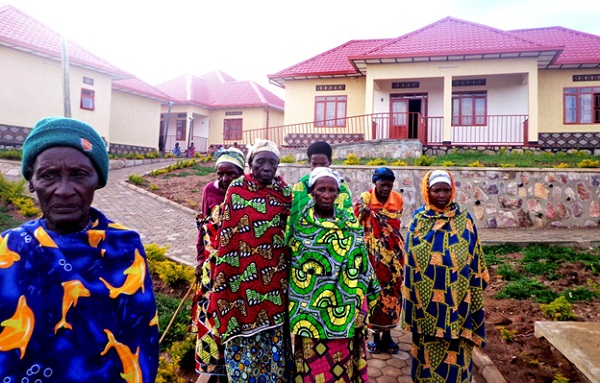 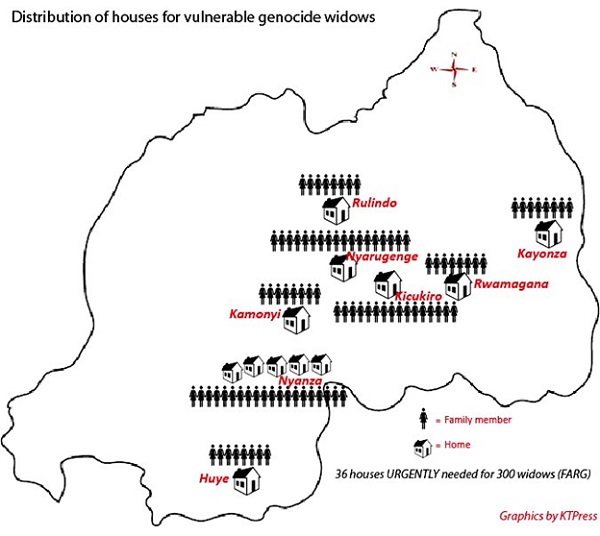