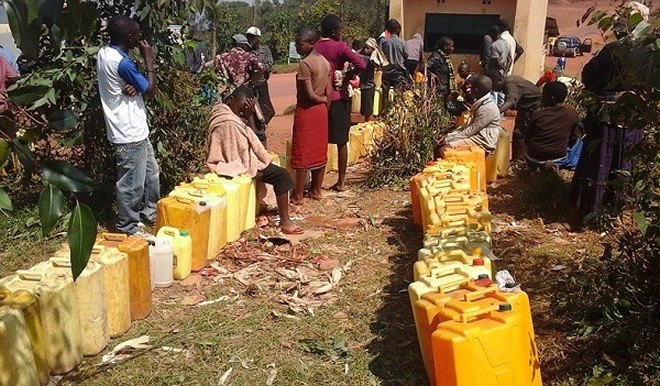 Residents queue to fetch water at a public tap

Rwanda’s water corporation has announced that in the next eight months, Kigali will have enough clean water.

Water and Sanitation Corporation (WASAC) has promised that by December 2016 there will be no more water shortage for good.

The apparent increase resulted from the upgrade to 25,000 m3 of Nzove II water treatment plant in Nyarugenge district.

However, there is still a gap of 20,000m3. The gap is costing heavily on city dwellers, especially maids and school children who spend nights awake waiting to be the first to fetch water at public water kiosks.

Sano said the upgrade of Nzove II by Culligan, an American firm, will continue to reach 40,000m3 by December, while Nzove I will also be optimized to produce 40,000m3.

The two phases that are meant to cost Rwf 5billion will bring total water coverage to 120,000m3, which will allow Kigali have required water ratio.

Ideally, every city dweller should consume 100 litres per day, but Kigali residents are still relying on 40  litres.

With Nzove upgrade, some neighborhoods that had accepted water scarcity as a norm, are now optimistic there will be no more water shortages.

“We used to get water twice in a week (Monday and Friday) but a couple of days ago, we were surprised to have water throughout the week. It seems God has remembered us,” said Emmanuel Hitiyaremye, a resident of Nyakabanda sector in Niboye sector-Kicukiro.

In our previous story, WSAC had indicated that some infrastructure can suffer rationing, but others are meant to never have a dry tap, not even for a second.

“You cannot afford to stop water flow at a hospital. If a disease starts from a hospital, consequences would be disastrous and WSAC would be liable,” said Methode Mutagungira, Director of Water and Sanitation Services at WASAC.

In 2013, the water loss increased to 42.38% of the total volume of water produced and distributed, according to auditor general’s report.

Rwanda will join the rest of the world to celebrate the World Water Day tomorrow. This year’s theme is ‘Water and Jobs’.

Last week Vincent Biruta, Minister of Natural Resources said that, “We will highlight how water and jobs interact to transform people’s lives.”