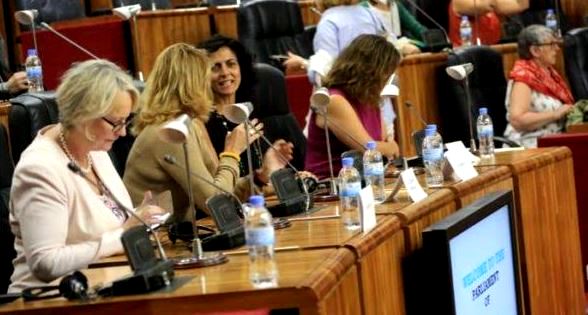 Delegation of visiting EU MPs during a session at Rwanda Parliament

Rwanda Parliament has denounced claims by the European Union members of parliament that government denies Victoire Ingabire her rights and freedoms.

Between September 19-22nd, a delegation of  EU MPs visited their Rwandan counterparts to share best practices on the rights of women and gender equality. However, when some of the EU MPs attempted to visit Ingabire  in prison, they were denied access.

After returning home, the EU MPs wrote in a report on their visit complaining about Rwanda’s recent constitutional amendment, lack of political space, media freedom and being blocked from accessing Ingabire in prison.

Ingabire is serving a 15 year prison sentence for negationism and revisionism of the 1994 Genocide against Tutsi on top of conspiracy and terrorism.

Responding to several concerns raised in the EU MPs report, Rwanda’s Parliamentary Committee on Unity, Human Rights and fight against Genocide on Tuesday said that visiting Ingabire was not on their official visit schedule.

“We regret to clarify that such a visit could not be accommodated as part of your official mission as it was formerly agreed by our Speaker and the head of EU delegation in Rwanda,” said Adolphe Bazatoha the chairperson of the committee.

The Rwandan MPs said in a four-page response, “We express our disbelief and disappointment with regard to the contents of the proposed draft resolution on Rwanda.”

MPs said that the contents in the draft resolution, “have been construed and equated all the acclaimed progress Rwanda has made in terms of women rights and gender to just one national convicted of the crimes of Genocide ideology, ostensibly because she is a woman.”

“We therefore take this opportunity to condemn in the strongest terms this deliberate distortion of facts.”

The EU members of parliament were instead reminded to work on requests that were submitted to them during their visit to Rwanda.

“We are urging you, in a spirit of our shared humanity that you use your parliamentary activism, to mobilize support to apprehend genocide suspects and get them back to Rwanda for prosecution or at least have them prosecuted in EU member countries,” the letter reads in part.

European countries host many Genocide fugitives, but for the last 22 years little has been done to arrest them, despite Rwanda sending arrest warrants.

The committee asked the EU parliament to mobilize against genocide denial in EU member countries saying such denial amounts to continued genocide.

“In any case, allowing genocide suspects to continue enjoying impunity in Europe is against our shared universal values,” part of the letter reads.

Rwandan MPs also advised the EU parliamentarians to emulate the good example of the grassroots European anti-racism movement for their work in the fight against genocide denial.

For other clarifications contained in the 4-page letter, Rwandan MPs said that the decision to amend the constitution last year was the wish of citizens as opposed to what the EU parliament committee stated.

The letter was addressed to Iratex Garcia-Perez, the chairperson of committee on women’s rights and gender Equality, European Union who led the delegation.

Michael Ryan, The EU Ambassador to Rwanda says the issues raised by the Rwanda parliament committee will be tabled before the European Union parliament.

Meanwhile, it is not for the first time some visitors to Rwanda from Europe are accused of deviating from their intended visit and ask to visit Ingabire.

In June this year, Caroline Buisman, a Dutch lawyer was expelled from Rwanda when she asked to visit Ingabire for legal talks while on tourism visa.

Kagame ‘Ready for Showdown’ With France in New Inquiry