Roger Patrick Claude Michel and Dimanche Jean Marc Roger both French nationals, on August 22 illegally entered Rwanda from Goma in Democratic Republic of Congo. They had no visa or clearance from an immigration officer at La Corniche border on Rwandan side.

Rwanda immigration officers asked the two men to return to DRC and apply for a visa online but refused and instead were whisked away to Kigali by a vehicle belonging to the European Union delegation with an official driver.

Upon arrival in Kigali, the two were arrested and sent back to Rubavu district for interrogation before being brought back and detained at Kicukiro Police station in the capital Kigali.

The two French nationals were conditionally released from detention upon admitting that they had violated the country’s immigration laws.

Prosecutors continued with investigations to determine; the motive of their illegal entry into the country, disregarding clear instructions by competent immigration authorities, and involvement of a European Union vehicle and its driver.

The immigration officials told KT Press that investigations have been dragging on because there was lack of collaboration between the two sides in availing the mentioned vehicle and driver which delayed the case. Identity of the driver and the vehicle in question were later provided on 30th last month paving way for thorough investigations.

On Thursday October 13, the two, after pleading guilty, were accompanied by French Embassy officials to immigration office in Kigali where they were immediately issued exit visas and will leave the country at 20:00hrs (18:00 hrs GMT).

KT Press asked them to comment on the matter but both were adamant. However, later Roger Patrick Claude Michel said, “We have no comment about the issue.”

After pleading guilty, the accused were fined Rwf1 million each as it is provided by the law.

There have been similar cases where foreigners break the country’s laws.

According to Yves Butera, head of communication at Immigration, “A Dutch lawyer, Caroline Buisman was in May asked to leave the country over violation of immigration laws. She was in the country using the East African Tourist Visa but engaged in non related activities.”

Another incidence involved a German national Redeker Anna Malin who was smuggling Somali nationals using Rwanda as a transit route.

Butera told KT Press that in addition to violation of immigration laws, some visitors have continued to exhibit high level of contempt against border officials.

“Kochaniewics Grzegors Josef, a foreign resident working with a consultancy firm in the country insulted a police officer at Kanombe International Airport. He admitted to refering to the airport security a stupid system and uttering racist comments against the police officer. The case is still under investigations,” Butera told KT Press.

Their Rwandan lawyer, Janvier Nkeshimana told KT Press his clients have no regret, “but pleaded guilty to violating Rwandan laws and have been cooperative during the investigations.” 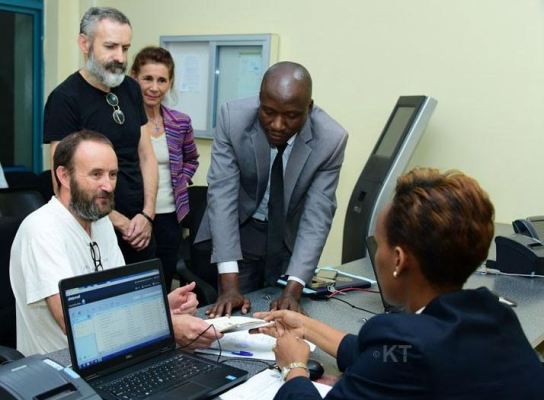