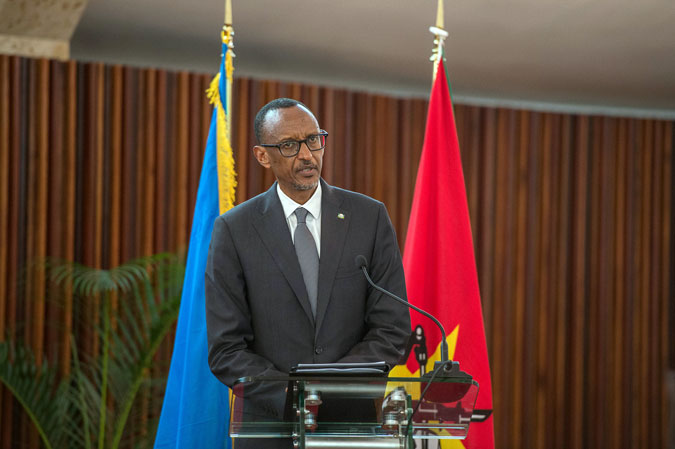 President Kagame speaking at a state dinner in Maputo yesterday

Rwanda’s President Paul Kagame has told Rwandan refugees in Mozambique
they are awaited home to support fellow citizen in developing their homeland they left dilapidated but has since transformed into a beautiful country.

The president made this declaration during his 2 day state visit to Mozambique to strengthen political and economic ties between both countries.

Recipients of this message were first and foremost over 3000 Rwandans who fled the country after the 1994 Genocide against Tutsi. Most of the refugees even participated in the Genocide and are still on the run.

Some of the fugitives were recruited by terrorist forces that operate in southern African states with intent to destabilize the current development in Rwanda.

The president said that Rwandans altogether have left a dark past behind and have chosen to embrace a brighter future which the Rwandan refugees should aim at being part of.

“Every Rwandan is welcome in the ‘New Rwanda’ – a country which has made choices based on its bad past and has opted to move on and become better through its aspirations,” said the president during a joint press conference with his Mozambican counterpart in Maputo today.

“Everyone who subscribes to the agreed constitutional order defined by national unity, has a place in the new Rwanda. It’s indispensable for all Rwandans to reflect on our collective experience and think of the kind of Rwandans we aspire to be,” Kagame said.

“Reconciliation meant delivering justice while fostering reconciliation because we had no choice but to live together again,”Kagame said.

Reconciliation saw in less than 10 years, the participative justice courts ‘Gacaca’ try two million cases that would have taken over 100 years to try in conventional courts.

“Once Rwandans saw that we could deal with the legacy of genocide, other goals, which seemed impossible, became more realistic,” Kagame said but underlined the importance of citizens’ involvement in achievement Rwanda has since made.

President Filipe Nyusi of Mozambique promised that his country will not allow Rwandan citizens residing in the country as refugees or asylum seekers to use its territory as a platform for activities intended to destabilize the achievements the country has realized in areas of economy, peace, unity and reconciliation.

Instead, the president promised to have all refugees peacefully repatriated and Genocide fugitives, deported.

The promise was made as high level consultation is set to bring together the government of Rwanda and the United Nations High Commissioner for Refugees in Rwanda (UNCHR) tomorrow to discuss cessation clause among others.

Officials will discuss how to end the refugee status by December 2017, a decision that will affect all Rwandan refugees who fled the country until December 1998.

Back to the state visit, both presidents held talks and reviewed areas of cooperation, including politics and diplomacy, justice, agriculture, state administration, mineral resources, culture and tourism.

To have a clear picture on areas of intervention, sector to sector joint committees from both countries will be formed, according to Rwanda’s Foreign Affairs Minister Louise Mushikiwabo.

For example, she said, the Mozambican minister of agriculture was invited to Rwanda to meet her Rwandan counterpart to identify the commodities both countries can share in trade.

Commodities would be carried by the Rwanda’s carrier, RwandAir Express which, it was agreed, is also starting flights in Mozambique.

Mozambique-Rwanda relations have been proceeding at a slow pace under a General Cooperation Agreement signed in 1990. The agreement failed to work better because of political crisis the two countries faced in the 1990s.

President Kagame paid his respect to Mozambique’s heroes at Heroes
Square this morning in the company of President Nyusi. 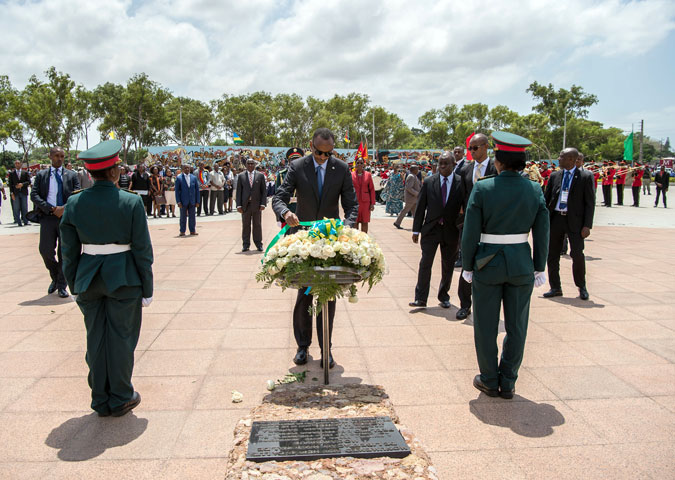 FDLR Top Commander ‘Will Return to Rwanda with no Tutsis’