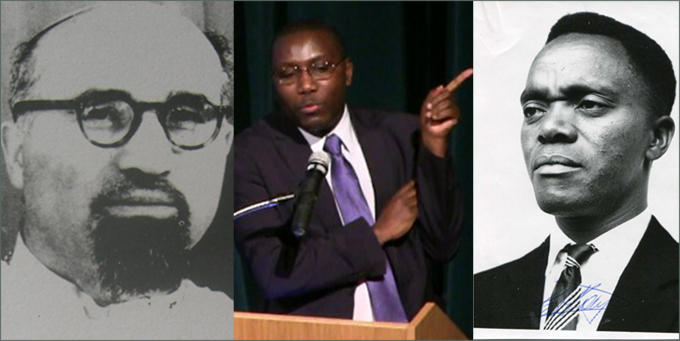 Ex-communicated catholic priest Fr. Thomas Nahimana has had a vision for Rwanda. And sometime in 2017, Rwanda could be a different country. He is determined to reach the vision – at whatever cost. He wants a Rwanda framed along ethnic lines – with clear documented differences.

At some point he said, “Hutus have been killed for many years, are still being killed, but their number keeps growing everyday despite the depopulation agenda.”

He was not done. “It is regrettable that the current government of Rwanda conducts population census not based on ethnic groups.”

Welcome to the club of Fr. Thomas Nahimana – a Rwandan politician returning to Rwanda to vie for the presidency next year. Nahimana has had interviews featured on different online media platforms including “Ikondera Info”. He brandishes himself as the only courageous spokesman of FDLR and Hutus.

Since 1959, he argues, Tutsis have been the most criminal ethnic group. Today, he claims, all government positions are in the hands of Tutsi. Hutu who are employed have renounced their ethnicity, he says. “They are RPF stooges, figureheads and no longer real Hutu.”

In the same online platforms, he pointed out he is worried about the Hutu’s livelihoods – majority of Rwandans working for a Tutsi-led RPF party. According to him, Hutus are like chicks playing around hawks. He calls them “Hutu de service”.

Fr. Thomas Nahimana was expected to arrive in Rwanda today at 14:50hr but was by press time still in transit at Jomo Kenyatta International Airport in Nairobi, Kenya. The former priest turned-politician is on his way to Rwanda after 10 years of self-exile in France. He left Rwanda around the exact time the country was launching the Gacaca community courts in 2005, which tried nearly 2 million genocide cases.

At the time of the 1994 genocide against Tutsi, Nahimana, then 22 years old, was attending one of Rwanda’s prominent seminaries studying philosophy. Nahimana carries multiple political cards in his pre-elections campaign, as seen in the many articles published on his website Le Prophete and interviews with blogs managed by friends-in-arms.

Prof. Pierre Rwanyindo Ruzirabwoba has published extensively on genocide ideology in Rwanda. He says the ideology of genocide against the Tutsi has its roots in the writings of the explorers, missionaries, and European colonisers of the end of the 19th century and at the beginning of the 20th century.

The colonial masters shifted alliances in their relationships with Rwandans. They started to label the formerly favoured group as colonisers. A new alliance between the Hutu and the colonisers started, and there was now a coalition between them against the Tutsi, who were labeled as enemies of the Hutu and anti-white.

They had support of the Catholic Church. Bishop André Perraudin, the defacto head of the church, on the occasion of Lent in 1959 wrote; “In this Rwanda of ours, the racial differences, and in this sense, political and judicial powers are proportionally concentrated in the hands of people of one race.”

And the Belgian Special Resident Governor for Rwanda Col. Logiest had this to say; “Today after twenty years, I was wondering as to the motives why I have to work with such determination. It is undoubtedly the will to give people their dignity; it is perhaps the desire to expose the duplicity of the offensive aristocratic injustice. Why have I entered into this affair? It is my love for humble, hardworking and respectful people.”

At that time the anti­-Tutsi ideology was conceived, developed and propagated. The result was: Republican Democratic Party for the Emancipation of Hutu (MDR-PARMEHUTU) ideology.

Considered by existing fact as a distant cause of the Genocide perpetrated on the Tutsi in 1994, MDR-PARMEHUTU ideology is based on the myths, prejudices and stereotypes contained in the literature of explorers, missionaries and colonisers.

It is this agenda that is pinned on the mind of Fr Thomas Nahimana. 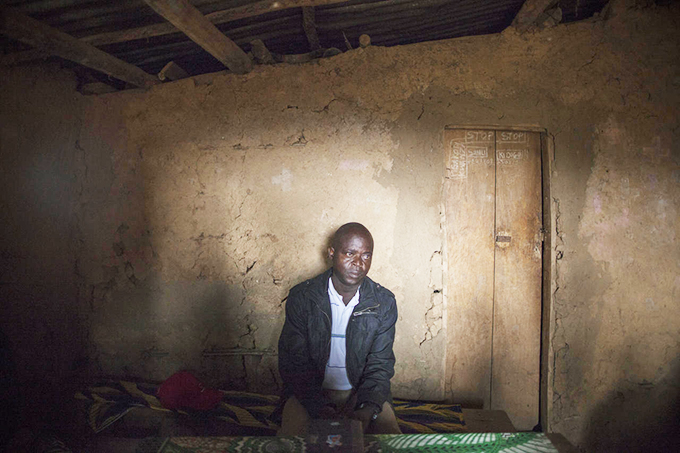 About two years ago, Nahimana formed a political grouping ISHEMA with about seven members including two women – one of whom Nadine Kansinge will be arriving with Nahimana from France.

For him, the FDLR militia – a terrorist group made up of Genocide perpetrators, is a pretext for President Paul Kagame to invade DRC for personal interests. Nahimana calls FDLR attacks on villagers, rape and forced mass displacement in the DR Congo, as defensive actions.

A German court found FDLR leader Ignace Murwanashyaka and his deputy Straton Musoni guilty of multiple cases of war crimes and crimes against humanity. They were sentenced late September 2015 to 21 years in jail. Their four-year trial heard that they oversaw the rape and massacre of hundreds of people as their fighters resisted an assault by the Congolese and Rwandan army in 2009.

FDLR militiamen terrorized civilians in the Kivu region of Congo while they exploited the area’s precious minerals. Several villages were attacked and many people were killed when their huts were set on fire.

In the eyes of Fr Nahimana, the FDLR are “sidelined Hutus” who are fighting back to recover their country. When former Tanzanian President Jakaya Kikwete said Rwanda should hold talks with FDLR – prompting global outcry, Nahimana published countless press statements, wrote articles and gave interviews vigorously campaigning in favour of the idea.

To oust the RPF leadership, Fr. Nahimana has advanced a formula. “They (Hutu) can topple RPF government if they boycotted work for some 15 days without reporting to places of work. Such a mass action by the majority Hutus would force the RPF government to the negotiating table.”

Bishop Philippe Rukamba – head of episcopal council of Rwanda, says the Catholic Church strongly distances itself from some of its priests who committed the Genocide and still hide under the Church. Bishop Rukamba added that the Catholic Church does not stand with priests accused of Genocide crimes, insisting that justice should take its course.

Referring to Fr. Nahimana, Bishop Rukamba said; “We expelled him from Cyangungu Diocese. He is no longer our priest and operates independently where he lives in self-imposed exile.”

Rukamba’s assertion is similar to statements made in the media by Dr. Jean Damascene Bizimana, Executive Secretary of the National Fight against Genocide (CNLG), who said such priests spreading genocide ideology like Nahimana should never be allowed to roam freely.

The Catholic Church is not alone in denouncing Nahimana. The site www.leprophete.fr was an idea managed initially by Nahimana together with a priest colleague Father Fortunatus Rudakemwa. Both were expelled from Cyangugu diocese. But Rudakemwa moved further – cutting all contact with Nahimana, who has since married and has children, whom he reportedly fathered earlier.

Fr Fortunatus Rudakemwa is no saint. In his book “L’Évangélisation du Rwanda (1900–1959)” published in 2005, Rudakemwa contends rather dubiously – in view of the 1994 genocide – that the Rwandan population is deﬁnitely and irremediably divided into three different ethnic groups. Rudakemwa wrote that the “Hutu are the people”.

Apart from genocide denial and mobilization for the war against the state, Nahimana, while in an interview published on YouTube, accused Rwandans of living in passivity.

According to him, in Rwanda, there is a “very violent” dictatorship that continues to kill people – a reason he says pushed him to enter into politics and do something as a way of ending passivity among Rwandans.

With the ISHEMA group launched in 2013 in France, Nahimana says his political group has decided to use non-violent means of political and social change in Rwanda as well as ending Tutsi domination. But his comments on some platforms paint a man who is determined to fight his way with arms to power.

As seen in many other articles published in his Le Prophete.fr news website prior to his scheduled arrival in the country, which sends a genocide ideology message, genocide survivors have started a campaign calling the government to arrest him upon arrival at the airport.

Nahimana has used his online publication to spread all sorts of genocidal propaganda. For him, he believes and maybe knows Rwandans just forgot what he believes in, says and writes openly. In those tapes he advocates for war against Rwanda and the usual hate propaganda.

For one commentator, “Maybe Nahimana thinks he can come and get a post to woo him because he has the backing of the international community. The articles he wrote as ISHEMA are good enough to deny him any amount of oxygen.”

Umbrella grouping of genocide survivors IBUKA has for years demanded government takes action against Nahimana.  While he was operating from the safety of France, all government would do was maintain diplomatic pressure on Paris – a strategy that has kept him free.

On Monday, IBUKA renewed its demand – calling on National Public Prosecution Authority to arrest Nahimana immediately the plane in which he is travelling lands at Kanombe International Airport. 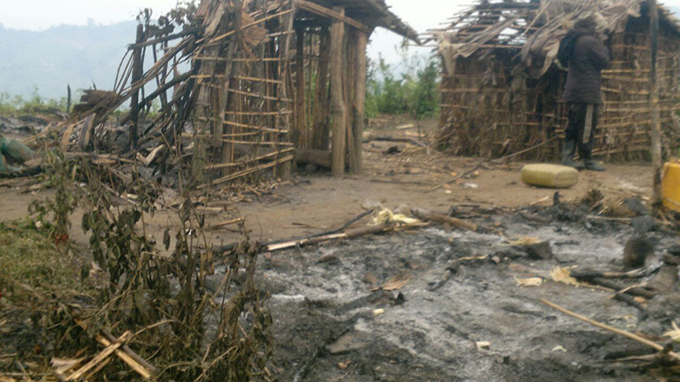 Trail of destruction and suffering that Congolese villagers have to live through under the FDLR. This village in eastern DRC was set ablaze by the militia accusing the locals of giving information to government forces