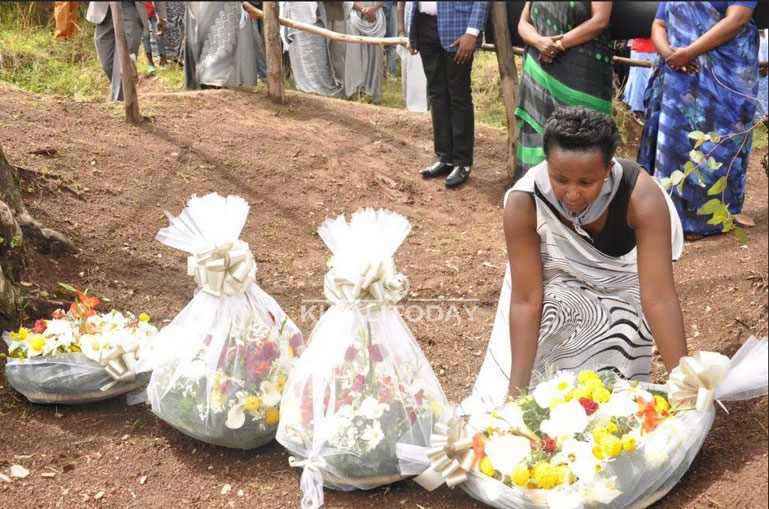 A site in Nyarubaka sector, Kamonyi District where Tutsi boys were hunted down and killed

Mukangagu never bore a child but was a well known local leader in Nyarubaka sector in Kamonyi district. During the 1994 genocide against Tutsi, she specialised in identifying baby boys and handing them to Interahamwe militia to be killed.

As the genocide intensified across the country, Rwanda Patriotic Front rebels also exerted more pressure in efforts to stop the merciless killings that targeted Tutsi.

However, in Nyarubaka sector , Mukangagu and her colleagues had an idea – they searched the village for all young Tutsi boys to kill them. It was thought that Tutsi boys would grow and facilitate the rebels but also multiply the Tutsi population.

Mukangagu is remembered for lining up all women carrying babies on their backs and when the baby was found to be a boy, she would hand it to Interahamwe militias and would immediately be killed.

For example, Beatrice Mukamurenzi and other Tutsi mothers were carrying babies on their backs as they fled from militia’s in Kamonyi district.

While on their way to Kabgayi diocese seeking refuge, they were badly beaten at a roadblock at Ruyanza cell manned by Mukangagu a woman nicknamed the ‘Female Herold’.

Mukamurenzi that later survived the genocide against Tutsi, narrated her ordeal  during a commemoration event at Nyarubaka.

“We were beaten and she used her authority to stop every woman carrying a child. When it was a boy, she would hand it to the killers.”

Mukangagu’s job was to bring to the killers any male child and did so on a strategic route where militias had put a roadblock between Musambira and Gitarama.

“Some women tried to dress male children with girl clothes to cross the roadblock but Mukangagu would undress them just to be sure,” Mukamurenzi said.

It is believed the ‘Female Herold’ masterminded the direct killing of about 80 male children in Nyarubaka- most of them below 18 years of age.

During the 23rd commemoration of the 1994 genocide against Tutsi, several women who lost their children asked Kamonyi district to build a special memorial site for the children.

“We have been asking for this site for many years. It should not cost more than a million francs – all we want is their memory kept in the place where they were killed,” one survivor said.

Kamonyi district Mayor Aimable Udahemuka said in response that the request will be implemented as soon as possible with a monument inscribed with all names of all children killed at Nyarubaka.