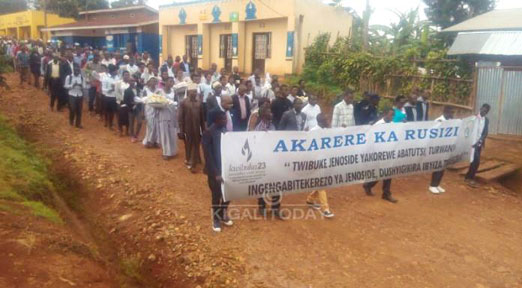 What started as a land dispute between neighbours in Rusizi district has turned into a very complicated matter that will only be sorted by court.

Emeline Kazeneza who has a child with a Genocide survivor yesterday got involved in an argument with Felix Bimenyimana over demarcation between their coffee gardens. Tempers rose leading to exchange of very hostile words.

Bimenyimana 29, is alleged to have told Kazeneza that he can ‘finish her off’ though he has given birth to a Survivor’s child.  This quarrel happened in the presence of his mother Laurence Mukamusoni aged 59.

Jean de Dieu Dushime, the Executive Secretary of Gikundiro Sector in Rusizi District  told Kigali Today journalist that the duo have recorded statements over the issue.

Bimenyimana admitted his guilt saying that he did it out of anger and wrote a document requesting for forgiveness, said Dushime adding that he’s going to be handed over to Police for prosecution.

Genocide ideology motivated utterance and Genocide trivialization activities are very common days before and during the 100-days period of  annual commemoration of genocide against Tutsi.

For instance, in 2016, 40 people were arrested across the country during the Genocide commemorative week, in connection with Genocide ideology.  However, Genocide denial is on decrease compared to previous years.

Last week, Gasabo District police apprehended a man in Bumbogo Sector after verbally threatening to kill his wife- a Genocide Survivor- and have her body rot before start of the commemoration kicked off on April 7, 2017.

Another survivor’s cow in Kicukiro district was attacked at night by unidentified people and hacked it around the neck with machete leaving the animal for dead.

Government veterinary doctors joined operated on the cow to rescue it but the animal died two days later.

Nyarubuye’s ‘Simba’ The Cannibal that Roasted and Ate Tutsi Hearts